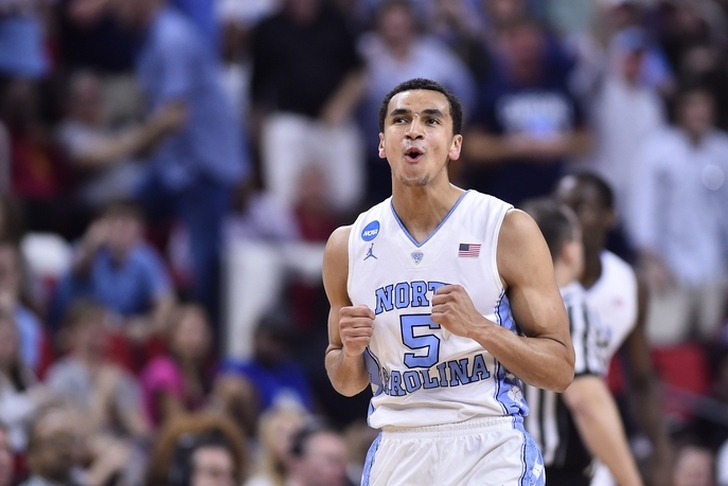 The North Carolina Tar Heels cruised into the Elite Eight with dominating wins over Florida Gulf Coast, Providence and Indiana. In the process, UNC put forth a strong argument as the best team remaining in the field. Now comes a matchup with the Notre Dame Fighting Irish, who will provide the Heels with another tough test. However, UNC is still heavily favored. Here are three reasons why North Carolina will come out on top:

3. Improved 3-Point Shooting
The Tar Heels were not a great 3-point shooting team this season. They hit just 32.1 percent of their 3-point tries, and were better off using their size (more on that below) to win games. But, UNC showed an improved 3-point against Indiana. The Tar Heels hit 11 of 20 3-pointers, or 55 percent. And the team actually cooled off once the game was out of hand, as UNC started the game 10 of 13. The Tar Heels might not be quite as sharp beyond the arc against Notre Dame, but it's a promising. If North Carolina is hitting 3-pointers, there's no way the Tar Heels will lose.

2. Size Advantage
Zach Auguste is the only Notre Dame player who sees time and is over 6-foot-8. If he gets into foul trouble, Notre Dame has serious issues guarding the post. They don’t have any rim protectors outside of Auguste and that's going to be a problem against UNC. North Carolina is one of the biggest teams in the country and that shows on the offensive end, as they lead all major conference schools in points in the paint. Not only are Brice Johnson, Kennedy Meeks, and Isaiah Hicks dominant around the basket, but the Heels are also an excellent rebounding team. The Tar Heels even have some big depth in 6-foot-10, 280-pound Joel James. Expect for the Heels to routinely exploit their major advantage on the inside.

1. Remember The Last Time ND And UNC Played?
For those who have forgotten, North Carolina obliterated Notre Dame 78-47 the last time the two teams played. UNC went on a 24-0 run at one point and simply dominated. Notre Dame turned the ball over 17 times and UNC hit 40 percent of its 3-pointers. That matchup happened just over two weeks ago, so it's not like the two teams have drastically changed. Notre Dame's string of comebacks in the NCAA Tournament will end at some point and it will be at the hands of North Carolina.