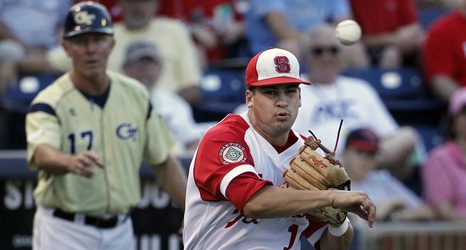 A strong start from Sam Highfill and a typically methodical effort from the Wolfpack lineup delivered an 8-1 win over Georgia Tech in the ACC tournament semifinal round on Saturday night.

The offense got to work in the second inning against Tech starter Marquis Grissom Jr. (yes, the son of that Marquis Grissom) after being flummoxed in the first. Terrell Tatum led off with a walk, and after Jose Torres popped out, Luca Tresh broke his slump with a double down the left field line to put runners at second and third. After Vojtech Mensik popped out and Devonte Brown walked, JT Jarrett delivered a bases-clearing double on an 0-2 pitch to stake the Pack to an early 3-0 lead.