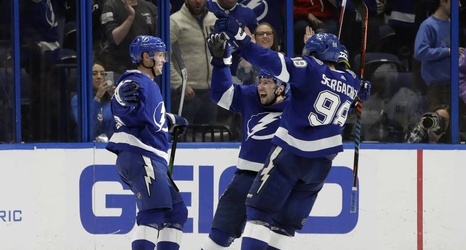 The Tampa Bay Lightning unleashed one of the best offensive performances we will see all NHL season Tuesday night.

Jon Cooper's side racked up nine goals in a blowout home win over the Vancouver Canucks, in which seven players struck the back of the net.

Additionally, 10 Lightning skaters recorded an assist, with Brayden Point contributing three handouts to go along with his single tally.

Carter Verhaeghe was the breakout star of the performance by recording his first-career hat trick, while goalie Andrei Vasilevskiy chipped in 21 saves.

Tampa Bay was not the only Atlantic Division side in the headlines Tuesday night, as the division-leading Boston Bruins knocked off the Nashville Predators.