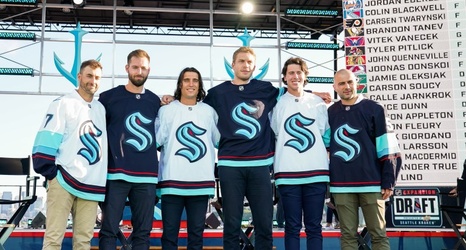 The initial Seattle Kraken roster was revealed during the NHL expansion draft July 21. Since then, general manager Ron Francis has made adjustments through trades and the free-agent market.

Defenseman Mark Giordano, winger Jordan Eberle and center Yanni Gourde were among those Francis chose in the draft. He's since added goaltender Philipp Grubauer and left wing Jaden Schwartz. More changes could be in store in the coming weeks as management continues to tweak the lineup.

Francis' fine-tuning makes it a bit of a challenge to determine what the Kraken could look like in their first regular-season game Oct.