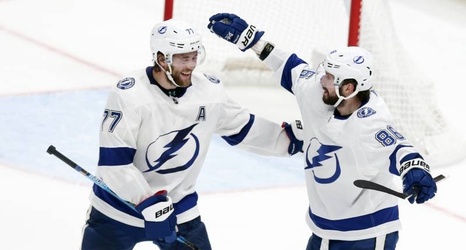 As the Tampa Bay Lightning keep winning, Nikita Kucherov continues to play a role in the team's goals.

The Russian extended his scoring streak to 12 games in Tuesday's 2-1 overtime win over the Pittsburgh Penguins, which was Tampa Bay's eighth consecutive victory.

Kucherov, 26, produced his 43rd assist of the campaign on Mikhail Sergachev's second-period tally in the battle of Eastern Conference contenders.

Over in the Western Conference, Jamie Benn of the Dallas Stars put up the lone hat trick during a Tuesday slate that featured a handful of multi-goal performances.