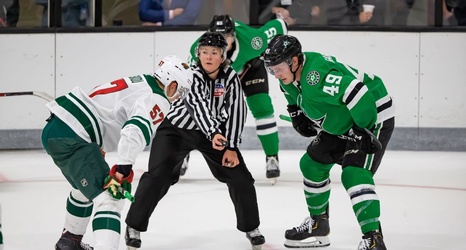 Growing up in Massachusetts in the late 1980s and early '90s, there weren't as many opportunities for girls hockey, so Katie Guay played with the boys until ninth grade. She always tucked her hair under her helmet. "I did it so when I was going into the boards, I wasn't as easy of a target," says Guay, now 36.

After graduating from Brown University in 2005, Guay began a post-hockey career in officiating. Now when she's on the ice -- in stripes -- she keeps her ponytail visible, poking out from behind her helmet. That includes this past week when Guay was one of four women to call NHL prospect tournaments; it was first NHL-affiliated event that women have ever officiated.