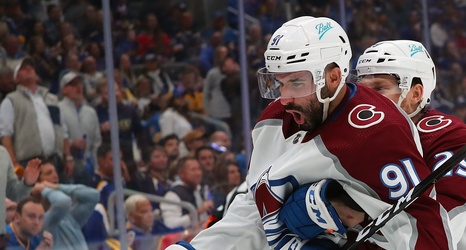 The Colorado Avalanche defeated the St. Louis Blues 5-2 on Saturday in Game 3 of their second-round Stanley Cup Playoffs matchup to take a 2-1 series lead, but not without a little controversy.

Blues goaltender Jordan Binnington exited the game early in the first period after both Avalanche forward Nazem Kadri and Blues defenseman Calle Rosen crashed into him while chasing a rebounded shot.

Ville Huuso replaced Binnington for the remainder of the game.

Ville Husso is now in between the pipes for the <a href="https://twitter.com/StLouisBlues?ref_src=twsrc%5Etfw">@StLouisBlues</a> after Jordan Binnington left with an injury on the play below.