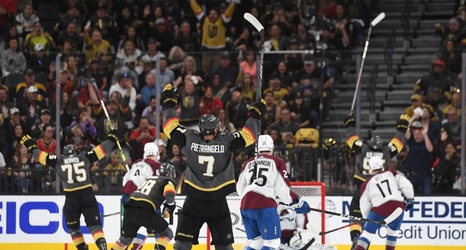 The Vegas Golden Knights have earned a second-round playoff series victory over the Colorado Avalanche after defeating the visitors 6-3 on Thursday at T-Mobile Arena.

Alex Pietrangelo scored the game-winning goal with 18 seconds left in the second period to give Vegas a 4-3 lead.

Pietrangelo also added an assist on a Keegan Kolesar goal to give Vegas a 3-2 lead earlier in the second. Andre Burakovsky got one back for the Avs before Pietrangelo's game-winner.

William Carrier added an insurance tally in the third before Max Pacioretty sealed the win with an empty-netter.

Vegas, which led 2-1 after the first period, won despite taking just 22 shots on goal.