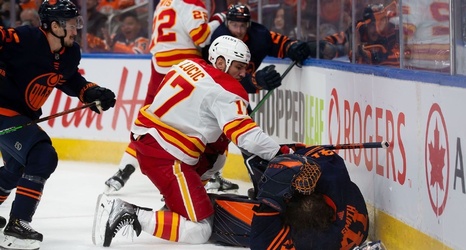 Mike Smith was half a period away from shutting out the Calgary Flames in Game 3 of Edmonton's second-round Stanley Cup playoff series on Sunday.

And then came Milan Lucic.

Calgary trailed 4-0 midway through the third period when Lucic barreled into Smith while he played the puck behind Edmonton's net.

The collision was bad enough that NHL concussion spotters forced Smith out of the game to be evaluated. Smith was clearly irate about the decision, arguing fruitlessly with referees to stay in the crease. He did finally exit, replaced by backup Mikko Koskinen.