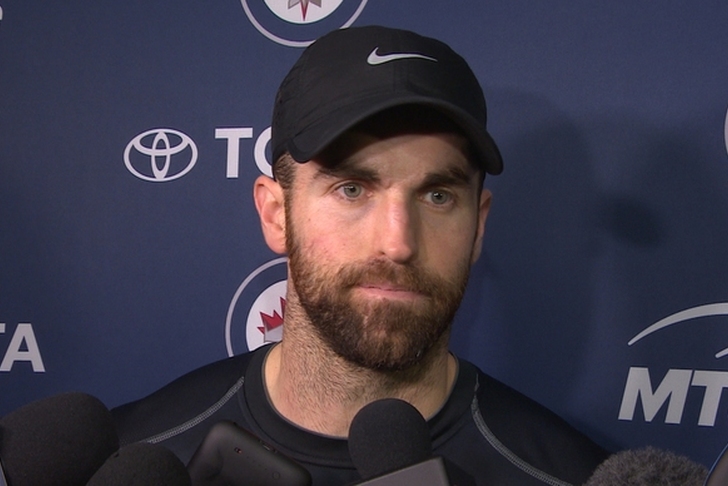 The 48 hours leading up to the trade deadline were expected to be some of the craziest and most frantic of the hockey year... except that they weren't. Sure, most teams made calculated moves - minor improvements to help round out the bottom-six, mid-range rentals that have that "Pending UFA" sign hanging from their necks - but it's safe to say that this year's deadline was anything but the drama-filled spectacle that was expected. Though very few big names were moved, there's still a lot to unpack here. As always, we'll start from the top of the standings and work our way down.

1. Washington Capitals (45-12-4) - Last Week: 1
So long, Brooks Laich. The likable, long-time Capital was sent to Toronto in order to free up some cap space. With his $4.5 million hit no longer weighing on them, and the addition of depth forward Daniel Winnik and defenseman Mike Weber, the Capitals have come away from the deadline in good shape.

2. Chicago Blackhawks (39-20-5) - Last Week: 3
What will Stan Bowman acheive next? Will he bring Bobby Hull out of retirement? Will he convince the league to restore the All-Star Jerseys to their former, early-90's glory? Well, no. But the Blackhawks wheelin' and dealin' GM landed the biggest name of the weekend in Andrew Ladd, though it cost him a pretty penny to bring him home. Short of a managerial miracle, it's tough to see how the front office will be able to keep these pieces in play for years to come. But Chicago has made a compelling case for Clarence S. Campbell favoritism as the postseason approaches with the addition of Ladd et. all.

3. Dallas Stars (38-19-7) - Last Week: 2
My working theory here is that Jim Nill had a temporary blackout for an hour or so Monday afternoon. And it was during that time he sent Jyrki Jokipakka, Brett Pollock, and a conditional second-round pick (that becomes a first rounder if the Stars advance to the Western Conference Final and Pollock dresses for half the games) for... Kris Russell. Look, I get that the Stars wanted to bolster the blueline. But a guy with these possession issues is not worth two prospects and a high draft pick. That's a rare misstep for an otherwise savvy GM.

4. New York Rangers (37-20-6) - Last Week: 5
Eric Staal waved his no-trade clause to join the boys in blue, who gave up Aleksi Saarela and two second-round selections for the Carolina captain. The Rangers have their eyes on this year's prize, and a top-six acquisition such as Staal could prove  the primer they need to weather the playoff storm.

5. St. Louis Blues (36-20-9) - Last Week: 4
It's been a bummer of a week for the Blues. It was bad enough watching Brian Elliott go down with a lower body injury that will keep him out for several weeks. Then, when the medically-impaired squad had a chance to add some offensive firepower this weekend, the Blues brass just sort of let out a collective sigh and twiddled their thumbs as they watched the deadline come and go. A team that ranks 24th in goals per game does not simply acquire an insurance goalie and call it evening, though that's exactly what Doug Armstrong did.

6. Los Angeles Kings (37-21-4) - Last Week: 7
Kris Versteeg was a reasonable depth acquistion and the Rob Scuderi / Christian Erhoff exchange wasn't Earth-shattering. It was a pretty vanilla weekend for the Kings, which isn't a bad thing for the best possession team in the league.

7. Florida Panthers (35-19-8) - Last Week: 6
Dale Tallon has gone antiquing once more. He's forming a formidable veteran forward base in Sunrise with his acquisition of Jiri Hudler and Teddy Purcell, which looks like a smart move as the Panthers prepare for a playoff run by packing their middle-six forwards.

8. Anaheim Ducks (34-19-8) - Last Week: 9
The Ducks filled out the roster rather nicely on Monday, snagging former second-round picks Brandon Pirri and Jamie McGinn for next to nothing (Pirri was worth a sixth round pick to the Panthers!), among other moves. Anaheim has won eight straight and with its sound decisions at the trade deadline, joins Chicago as one of the Western teams I'd rather avoid.

9. Tampa Bay Lightning (37-22-4) - Last Week: 10
The Bolts are on a roll, too, and have won seven straight to move earn a share of the division lead. Maybe it's a good thing that Steve Yzerman didn't make any changes. And he held on to Jonathan Drouin, which gives him another piece with which to work this offseason.

10. New York Islanders (33-20-7) - Last Week: 8
Kyle Okposo will be wearing orange and blue for the rest of the season. Instead of trading him, the Isles snagged Shane Prince from Ottawa for a third-round selection. They're 7-2-1 in their last 10 and appear to be peaking at the right time.

11. San Jose Sharks (34-22-6) - Last Week: 12
James Reimer showed he was capable of enduring just about anything the media and/or his own team could throw at him in Toronto, so I like that the Sharks broght him on board as a failsafe for Martin Jones. Add in Roman Polak and Nick Spaling (and the fact that they offloaded Raffi Torres's contract) and it was a decent weekend for San Jose.

12. Detroit Red Wings (32-20-11) - Last Week: 14
Detroit opted not to make any moves; a wise move for a team that's doing just fine. If they feel like they could use more scoring depth, though, maybe they could convince Steve Yzerman to come back. He looked like he hadn't lost a step in Friday's Stadium Series alumni game.

13. Boston Bruins (34-23-6) - Last Week: 11
The B's held onto Loui Eriksson and brought John-Michael Liles on board to provide back end stability. They snagged Lee Stempniak, too, who is having a career year in his 11th season. A second and fourth-rounder is a bit steep for a player he's been mediocre for most of his career, though.

14. Nashville Predators (31-21-11) - Last Week: 15
The Preds have lost just once in regulation over their last 10 outings and decided not to make any significant moves outside of a minor league swap - a good move, considering they hope to sign Havard's Jimmy Vesey soon. Also, Pekka Rinne has a .974 save percentage and two shuouts in the past two weeks. That's encouraging, to say the least.

15. Pittsburgh Penguins (32-21-8) - Last Week: 13
I'm not a huge fan of bringing Justin Schultz on board, though he only cost a third-round pick and the Pens could use a little help on the blue line. And getting rid of Sergei Plotnikov before he bailed to play in Russia was a savvy move, so so it was a good weekend in the Steel City.

16. Philadelphia Flyers (29-22-11) - Last Week: 20
Nothing. Nada. ZIp. I'm not sure if the Flyers opting to stay out of the trade deadline fray means they're happy with their squad and are ready to make a playoff push, or are gearing up for an improved season next year.

18. Colorado Avalanche (32-28-4) - Last Week: 18
Well, the Avs swapped Mikkel Boedker and Alex Tanguay, and brought on the aforementioned Gelinas. But more importantly, I got to see Patrick Roy and Joe Sakic play again this weekend. Gas is going for $1.70 a gallon. Wait... guys, help. I think I'm stuck in 1999.

20. Ottawa Senators (30-27-6) - Last Week: 21
A third round pick for Shane Prince and a few minor league swaps was the extent of the movement coming from Ottawa. The lights are dimming now that Kyle Turris is done for the year.

21. Carolina Hurricanes (28-26-10) - Last Week: 19
Ron Francis was one of the more active GM's this weekend and it paid off in a big way. The Canes offered up a firesale, shipping off captain Staal, Liles, and Versteeg for a slew of picks and some promising prospects. One could argue Carolina was the biggest winner in this year's quiet, late-season shuffling.

22. Montreal Canadiens (30-28-5) - Last Week: 22
The Canadiens shipped Dale Weise and Tomas Fleischmann off to Chicago for a second-round pick and Phillip Danault, flipped Smith-Pelly and Matteau, etc. etc. Remember the part in Titanic where the string quartet sends the remaining passengers off with a final performance? That's about where the Habs are at this point.

24. Arizona Coyotes (27-30-6) - Last Week: 23
The 'Yotes brought in Tanguay and two prospects for Boedker, among other smaller moves. The Plotnikov deal is the most intriguing, as there's no guarantee he'll be on this side of the Atlantic come next season. For a team that has crashed and is currently burning following a six-game losing streak, they did what they had to do at the deadline.

25. Columbus Blue Jackets (26-30-8) - Last Week: 28
Nothing much to report here, other than a two-year contract extension for Boone Jenner. Once more, the Jackets are making a late-season push to the middle of the pack, forgoing any chance at the lottery and dropping a few spots in the upcomming draft. Foolish, but honorable.

26. Winnipeg Jets (26-31-4) - Last Week: 26
It was Ladd or Dustin Byfuglien, and the stuck with the latter. The acquisition of Marko Dano, the highly-touted Jacket-turned-Blackhawk-turned-Jet, is one of the finer returns this year.

27. Buffalo Sabres (25-31-7) - Last Week: 27
The Sabres shedded Weber and McGill for future draft picks in a last-day sell off. Both were intelligent moves for a team that's slowly but surely rebuilding. Your time is coming, Buffalo.

28. Calgary Flames (26-32-4) - Last Week: 25
Brad Treliving offloaded Russell for a veritable gold mine, received an excellent return for Hudler, and shipped off David Jones as well. This budding young squad has just about everything figured out moving foward... except goaltending. Look for the Flames to make some moves this offseason.

29. Toronto Maple Leafs (21-30-10) - Last Week: 29
The Leafs secured Connor Carrick and Laich from the Capitals, and three second-round picks for the trio of Polak, Spaling, and Winnik. It's now safe to say we live in a world where the Leafs management is consistently making sound decisions. I don't know if I'm comfortable with that feeling.

30. Edmonton Oilers (23-34-7) - Last Week: 30
Patrick Maroon was a nice, affordable depth add and getting rid of Purcell and Schultz appears to be an intelligent move on the surface. Now they just need to win the draft lottery (again) and the Oilers are well on their way to building a respectable defensive corps.