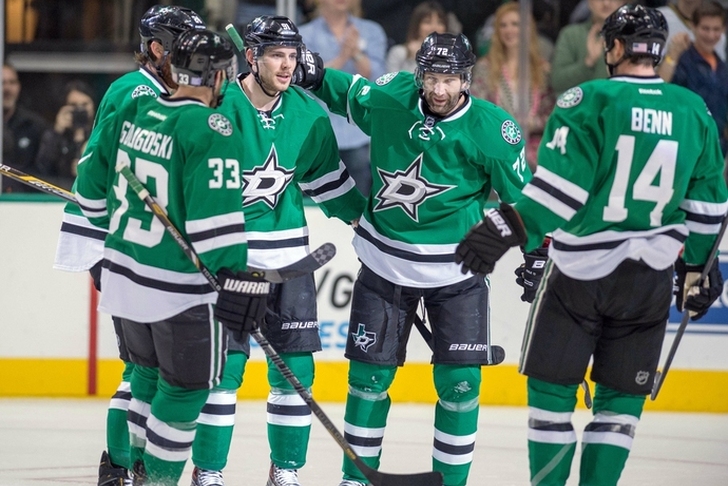 The Stars stay hot, the Devils cool down, and the Oilers are still, well, the Oilers. The New York Rangers remain our #1 team for the 2nd straight week, while the Sharks and Senators both move into the top ten, at #8 and #9. Here are your power rankings for the week of Nov. 23 around the NHL.

The Blueshirts have lost just one game in November and boast a plus-15 goal differential in that span. Henrik Lundqvist is enjoying the finest season of his storied career, leading NHL goaltenders in the four main categories: wins (tied for first with 11), save percentage (.943), goals-against average (1.85) and hairstyle (luscious).

The hockey world has waited a quarter of the season for the Stars to fade, but they're shining brighter than ever these days and its time to give them their due. Dallas has a game in hand over Montreal and both have 34 points to top the league standings. Jamie Benn's 14 tallies are tops in the NHL, as are Tyler Seguin and John Klingberg's 19 assists. They've won five in a row now and the Stars don't appear to be slowing any time soon. Honestly, it takes a coin flip to decide whether it's these guys or the Rangers who deserve the top spot.

Having played one less game with the same point total, Dallas swiped the second spot from Montreal this week. But Carey Price is back and notched a 5-3 win on the road against the Islanders Saturday. Having to do without last year's Hart and Vezina winner for 11 games was obviously a setback, but backup goaltender Mike Condon and the rest of the Habs performed admirably and posted a 7-2-2 record in his stead.

Not much has changed for St. Louis the past week, as it's stayed afloat with five wins in its past 10 games. Losses to the Blue Jackets and Red Wings are ones they might want back, but the Notes have been one of the more injury-plagued teams in the early going and have had to fight through quite a bit to maintain sole possession of second place in the crowded Central Division.

The Caps are looking good, and goalie coach Mitch Korn has Braden Holtby back in form. Holtby has allowed as many as three goals just once in his prior five outings; his most recent start versus Colorado, and his team handled that contest with ease. If this is a sign of things to come for Holtby the rest of the way, Washington is in pretty decent shape.

The bad news: Following his two best performances of the year, Pekka Rinne has lost his most recent two starts while allowing seven goals on a mere 44 shots. The good news: The Preds are still a quality team in all three zones, and despite not having a powerful Top 6 forward lineup they can still do some damage on the scoresheet.

After dropping three-straight road games to the Stars, Penguins and Bruins, the Wild are back on track following a blanking of Nashville. Mikko Koivu and Ryan Suter continue to produce at a near point-per-game rate and the Wild excel at even strength hockey. Their special teams, however, continue to be a concern. The Wild's 13th ranked power play is healthy compared to a 26th ranked penalty kill that operates at 75.5 percent proficiency.

The Fins are the NHL's biggest movers this week. They've won their last six contests - all of which were on the road - and a favorable schedule for the next three weeks should give San Jose a real chance to maintain and build on that lead in the Pacific Division.

Back-to-back shutouts have the Sens looking like a legitimate playoff threat. A resurgant Bobby Ryan has 19 points in 20 contests, and production from its deeper lines is a good sign.

L.A. has given up the third fewest goals of any team so far this season, and much of that can be attributed to a penalty kill that holds opponents to a 15.4 percent conversion rate. Jonathan Quick has still struggled to find consistency this season, but the Kings are finding a way to get it done without their star goaltender hitting his rhythm.

The Penguins are 6-4-0 in their last 10 games and it looks like this is about where they'll stay for the duration of the year. Despite the Phil Kessel acquisition, the Penguins have still struggled to find offensive consistency this season. It all comes back to Sidney Crosby's slow start, but points in his most recent two games is an encouraging sign.

The Wings have won six of their last 10, losing to the Stars, Sharks, Bruins and Capitals in the past few weeks. Not bad, but what's concerning is that Detroit has averaged 2.1 goals per game in that span. If they wish to carve out a solid playoff spot, they'll need more production moving forward.

Back-to-back losses to the Flames and Canucks dimished what could have been a nice rise in the polls for the 'Hawks. They've got a three-game west coast swing looming, and tough matchups with the Wild and Senators following that, so things won't be getting easier for Chicago in the next few weeks.

The term "regression to the mean" comes to mind with the Devils. Losses to the bottom-dwelling Flames and Oilers haven't helped New Jersey's cause, though Cory Schneider continues to put in work deserving of All-Star consideration.

Four of the Lightning's last five losses have been by a one-point margin, so it's not as if the Bolts aren't competitive. It also appears that Nikita Kucherov has finally found his footing - his three-point effort and game winning goal against the Ducks this weekend puts him behind only Steven Stamkos in the points department for Tampa Bay.

New York has dropped five of its last eight against a largely competitive field. Jaroslav Halak has been up and down in his last few games and was pulled after allowing three early goals to the Canadiens on Nov. 20, but expect him and the Islanders to rebound in the coming days.

The B's were victorious in four of their last six contests and it appears that Tuukka Rask is starting to show some semblance of his former self; the goaltender has allowed even strength goals in just two of his previous five appearances, albeit three in each of those instances. As long as he continues to progress, so too will Boston.

After dropping six straight decisions, the Jets have righted the ship in their last two contests. Goaltender Ondrej Pavelec has been placed on the IR following a collision with Arizona forward Shane Doan and could be out for an extended amount of time, which leaves the door open for Michael Hutchinson and recent call-up Connor Hellebuyck to cary the flag moving forward. Based on Pavs' recent performance between the pipes, his abscence might be a welcome change in Winnipeg.

It continues to be a Jeckyl and Hyde kind of season for goaltender Mike Smith, who has garned save percentages either above .938 or below .825 in his last five appearances in the Arizona crease.

Jaromir Jagr continues to drink from some hidden, personal Fountain of Youth; he's scored in four of the last five outings. But Florida's lackluster penalty kill (75 percent efficiency) and sporatic play from the Roberto Luongo has the team stuck in neutral.

What kind of team drops eight of its last 10? The kind of team that gives away Cory Schneider for next to nothing, and then pulls out its wallet for a past-his-prime Ryan Miller. It's going to get worse before it gets better for the Canucks.

The Sabres have averaged just one goal per game their prior four contests, all of which were loses. You can't blame goaltenders Linus Ullmark and Chad Johnson for the low-scoring losses to the Stars, Sharks, and Blues. Both have filled in admirably while Robin Lehner continues to heal.

The Ducks - yes, the Anaheim Ducks - boast the best penalty kill in all of hockey. It's too bad that talented blue line hasn't been able to put the puck in the net.

Not much is going right in Raleigh, and it starts with the goaltenders. Cam Ward has fought his way to the .900 save percentage mark, but newly-acquired Eddie Lack has done nothing to supplant the aging Hurricane starter.

James Reimer has stopped at least 95 percent of the shots he's faced in each of his last five starts, four of which were wins. Is this the return of a stable Maple Leafs goalie? Stay tuned.

The Flyers have won just twice in their last 10 contests. Their minus-23 goal differential is second only to Calgary's NHL-worst minus-25, 2015 All-Star Jakub Voracek has been dropped to the third line, and Michal Neuvirth still hasn't been named the starting goaltender. I could go on, but I think that's sufficient for this week.

Speaking of underperforming All-Stars, Mark Giordano hasn't scored since Nov. 3 and has been taken off the first power play unit by coach Bob Hartley.

The Jackets have won six of their last 10, which is a monumental achievement given the dreadfully slow start to the season. Sergei Bobrovsky has earned the "W" in four of his last five contests, and only slipped below a .930 save percentage once in that span. Perhaps this is a sign of good things to come for the ailing Jackets.

Colorado won the first three games on its current seven-game road trip, but dropped all three last week. With just two home games in the next two weeks, things aren't getting easier for the Avs.

We might be in for yet another Draft Lottery win for the Oilers in the offseason. The saga, regretably, continues in Edmonton.