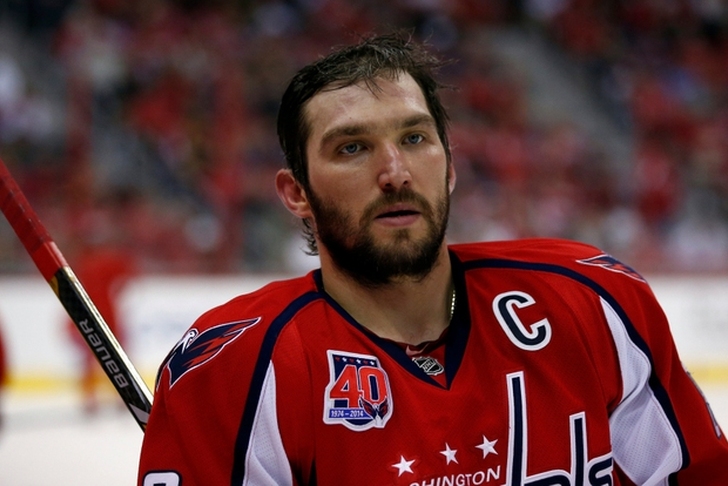 The trade deadline has come and gone, the playoff picture is beginning to clear up, and Canadian teams are in full-on tank mode. It must be March!

The postseason is a little more than a month away and teams are taking note. The Ducks have continued their torrid rise in the standings, as have the Lightning. Conversely, the Panthers, Red Wings, and Devils have all taken a step backwards. Below are the Chat Sports NHL Power Rankings for the week of March 7. As always, let me know your thoughts in the comments section or on Twitter.

1. Washington Capitals (48-13-4) - Last Week: 1
Our country's Capital has hit the 100-point mark and, though the Caps struggled to maintain focus as of late, they are in the midst of a road trip that will serve as a late-season barameter for the squad that should go on to capture the President's Trophy.

2. Chicago Blackhawks (41-21-5) - Last Week: 2
It took just 21 seconds on Sunday for Patrick Kane to notch his 38th goal of the year. The twisted wrister stands as his 89th point this season - a career best - and he still has 15 games remaining in the regular season. Oh my.

3. Dallas Stars (40-20-7) - Last Week: 3
A Corsi-for percentage of 53.30 coupled with five players who have 47 or more points on the season is a recipe for success. If the back end can keep them in games, the Stars should be primed for a deep playoff run.

4. Anaheim Ducks (37-19-8) - Last Week: 8
These are the Ducks we expected to see at the beginning of the year; 11 consecutive wins, a 52.80 Corsi-for percentage (good for third in the league, just behind Dallas), and two resurgent goaltenders have propelled them to the top of the Pacific standings. Anaheim is 18-1-1 in its last 20 contests, a freakish feat by any measure. The dynamic duo of Corey Perry and Ryan Getzlaf has combined for 45 points in that span.

5. St. Louis Blues (38-20-9) - Last Week: 5
The Blues keep finding ways to get it done. Colton Parayko has maintained his high level of play and Jake Allen is back from injury and in fine form. Allen, for his part, has recorded a .930 save percentage or higher in his past three outings.

6. Tampa Bay Lightning (39-22-4) - Last Week: 9
With the Ducks making a dramatic, second-half comeback this season, the defending Eastern Conference champions' battle back from the brink has been decidedly less heralded than that of their Western Conference counterparts. But the Lightning deserve more than a fleeting appreciation. They rank among the top fifth of NHL teams in major possession metrics and the signature "Triplets Line" is finding the back of the net more often now that all three members are at full strength.

7. New York Rangers (38-22-6) - Last Week: 4
Henrik Lundqvist's Thursday night tantrum was fantastic, and brought back memories of other goaltending greats abusing their nets (skip to the 1:20 mark to see "why Dominic Hasek was named MVP" that year). The Blueshirts have been middling as of late, especially following their 6-4 loss at the hands of the rival Islanders, but they have the pieces to make a go of it again this year. Rick Nash, who hasn't played since Jan. 22, has resumed skating and should be practicing shortly, which will add a nice offensive boost heading into the home stretch.

8. Los Angeles Kings (38-22-4) - Last Week: 6
A pair of losses to the Ducks are the only blemishes the Kings have to show over the last two weeks of play. The Kings are still possession royalty, and are tied for the most shots on goal per game this season.

9. New York Islanders (36-20-7) - Last Week: 10
Rangers goaltender Anti Raanta described his first period against the Islanders Sunday as "the coldest nightmare." Besides being oddly poetic, it actually makes sense. The Islanders have been a constant, underrated threat this season, and the heartbreaking Game 7 loss to Washington in last season's quarterfinals only amplifies the cold, calculated nature of this squad. A potential pairing with the Rangers in this season's opening round certainly has all the hallmarks of an entertaining one based on what we witnessed Sunday.

10. Florida Panthers (36-21-8) - Last Week: 7
The Panthers have suffered a bit of a setback and lost four of their last five, including an ugly one in Arizona. The franchise will honor the roster that appeared in the 1996 Stanley Cup Final this coming Saturday, which has absolutely no bearing on the current team's play, but is likely a nice distraction for fans of a team that could go from battling a wild card squad on home ice to taking on one of the two most dangerous teams in the East due to a few weeks of poor play. It hasn't reached that point yet, but the Bruins are hot on the Panthers' heels and the race is pretty tight top to bottom.

11. Boston Bruins (36-23-7) - Last Week: 13
The Bruins have been a terror on the road this season (21-7-3), and top 10 special teams units have kept the Bruins competitive in the Atlantic Division. Three of Boston's last five wins were decided by three or more goals, if that's any indication of how explosive the offense has been recently.

12. San Jose Sharks (35-23-6) - Last Week: 11
The last four losses the Sharks have suffered came at the hands of teams with 70 or less points in the standings. Logan Couture and Joe Thornton have combined for 36 points over their last 15 games, though, so there's certainly no lack of offense out West.

13. Nashville Predators (33-21-12) - Last Week: 14
Just when all appears lost, the Predators battle back to into the first wild card spot with a little help from their netminder. Pekka Rinne has been fantastic of late, and in his last eight games he holds a 6-0-2 record. The former Vezina finalist earned two shutouts in that stretch and averaged a .947 save percentage.

14. Pittsburgh Penguins (34-23-8) - Last Week: 15
The 'Guins are fighting for survival in a one of the final Eastern Conference playoff slots. Good possession numbers and an overacheiving offense have carried the day for Pittsburgh lately, especially from one Evgeni Malkin. The second line center has recorded seven points in his last five contests to help keep his team in contention.

15. Detroit Red Wings (32-22-11) - Last Week: 12
Four-straight losses were followed up by three wins dating back into February, but the Wings are slumping again after a pair of defeats. The Blackhawks bested them twice this past week, no thanks to poor offensive efforts by Detroit. Hockeytown has put up three points or more just three times in its last nine contests.

16. Philadelphia Flyers (30-23-11) - Last Week: 16
The Flyers won't bow out quietly. Four points out of the playoff picture with a game in hand over Detroit and Pittsburgh, the City of Brotherly Love is 6-3-1 in its most recent 10 games. The losses came to the Canadiens, Hurricanes, and Oilers - a caveat that doesn't bode well for the boys in black and orange - but they'll have a chance to prove themselves against five teams in the playoff picture over the next two weeks.

17. Minnesota Wild (31-26-10) - Last Week: 19
The Blues may have ended the Wild's four-game win streak, but their next five contests come against teams that are all but out of the playoff picture. Minnesota is clinging to the final playoff spot in the West with only Colorado giving chase; the Wild's fate is in their own hands.

18. Carolina Hurricanes (29-26-11) - Last Week: 21
It will take a Hurculean effort for the 'Canes to fight their way into a playoff spot at this point. They've played 66 games and still stand six points outside of the playoff picture. Losing four of its last five games hasn't done Carolina any favors, either. Eddie Lack and Cam Ward have .903 and .907 save percentages, respectively, and unless one or both of them suddenly begin to put up Vezina-caliber numbers, this team will have to wait until next year to pursue its playoff ambitions.

19. Colorado Avalanche (33-30-4) - Last Week: 18
Failing to secure points in four of your last six outings isn't a good way to go about earning a ticket to the postseason. The Avalanche have a breezier schedule in the coming weeks, but a nightmarish, league-worst Corsi-for of 43.99 percent means that, like points in the standings, scoring chances are at a premium. Better defensive zone play and goaltending is key, and right now, Calvin Pickard is the man that's getting it done in the blue ice.

20. New Jersey Devils (31-29-7) - Last Week: 17
Even if Cory Schneider was at full strength the Devils would have an uphill battle for a playoff berth. Now he's out for two weeks and any semblence of hope has pretty much evaporated from New Jersey.

21. Ottawa Senators (31-29-7) - Last Week: 20
Dave Cameron is still running his team like it will be seeing the ice in April. It probably won't, but that's a respectable move from the bench boss.

22. Montreal Canadiens (30-30-6) - Last Week: 22
Oh, what could have been. Montreal's descent flew in the face of logic. Even without Carey Price, this was a team that should have been in one of the final playoff spots out East. Sportsclubstats.com lists the Habs' chances of making the postseason at 1.3 percent. They'll be back in force next year, but it's still not easy for Montreal fans to hear this season is over.

23. Vancouver Canucks (25-27-12) - Last Week: 23
There hasn't been much to write home about this year as far as Vancouver is concerned. Too competitive fo the lottery and too shallow for a playoff push, the Canucks are settling in for a bummer of a final stretch.

24. Arizona Coyotes (28-31-6) - Last Week: 24
Saturday's 5-1 home victory over the Panthers brought the Coyotes out of a seven-game tailspin that effectively eliminated them from the postseason. Veteran addition Alex Tanguay will likely be a major influence in the development of younger players on the Arizona roster, and he'll face a bittersweet homecoming when the 'Yotes head to Colorado Monday.

25. Columbus Blue Jackets (27-31-8) - Last Week: 25
The Jackets are 4-4 in their last eight games. They've scored a combined 20 goals in those four wins compared to just two goals over those four losses. Joonas Korpisalo has filled in admirably for the injured Sergei Bobrovsky, but this is a team that needs to put up three or more goals a game if it wants to find the win column consistently.

27. Winnipeg Jets (27-33-5) - Last Week: 26
As Paul Friesen mocks in this Winnipeg Sun article, it's "the True North, strong and playoff-free!" At least the Jets are tabbed to host the Heritage Classic next year.

28. Calgary Flames (27-34-4) - Last Week: 28
The Flames might be putting a piss-poor product on the ice, but Calgary's front office is on fire. Freezing the cost of season tickets is a great move for the Alberta-based sqaud.

29. Edmonton Oilers (26-35-7) - Last Week: 30
The Great One will be taking to the ice in next year's Heritage Classic in Winnipeg. For an entire generation of hockey fans, this will be the first - and probably the last - time they'll ever see Wayne Gretzky lace 'em up.

30. Toronto Maple Leafs (21-33-10) - Last Week: 29
One regulation win in its last 10 contests is a sure sign that Toronto is in full-on tank mode. Sooner or later, the NHL is going to have to talk about a rule change to get rid of this ugly phenomenon. But for now, let the dumpster diving begin, Canada!