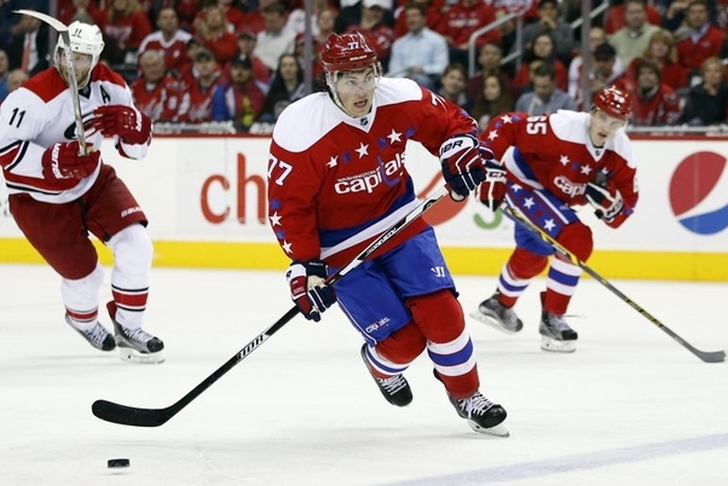 The playoffs are mere weeks away, hockey fans. The die is nearly cast; as the playoff picture comes into focus, teams within the postseason perameters are gearing up for a run, while those left behind are looking forward to next season. The Wild have pulled ahead in the wild card race out West, while the East is entrenched in a four-team battle. As has been the case for months, the Capitals are firmly planted atop the NHL standings. Read on to see how your favorite team fits into the puzzle, and be sure to make your voice heard in the comments section.

1. Washington Capitals (53-16-5) - Last Week: 1
I'm not entirely sure what's going on here, but I do know that the Caps have a plus-58 goal differential and they have a practical lock on the President's Trophy.

2. Dallas Stars (45-22-9) - Last Week: 2
The Stars have gone 3-1 without Tyler Seguin, who said his Achilles injury reminded him of a scene from the 2005 film Hostel. Though Seguin has announced he hopes to make a full recovery by the by the playoffs, there's no word as to whether he will watch better moves during his several weeks off.

4. Los Angeles Kings (45-25-5) - Last Week: 3
A sloppy, 6-4 victory over the Oilers ended a three-game slide for the Kings. Los Angeles and its stalwart back end has been uncharacteristically vulnerable lately, allowing 15 goals in its past four contests. The Kings and Ducks are virtually locked in a tie atop the Western Conference.

5. Anaheim Ducks (41-23-10) - Last Week: 5
Three of the Ducks' most recent four contests have required overtime. Wins over the Senators and Jets have kept them competitive with the Kings, but losses to the Maple Leafs and Canadiens in the last 10 days are unsightly blemishes at this point. Games versus the Oilers, Flames, and Canucks in the next week will give Anaheim a chance to steady itself heading into the playoffs.

6. New York Rangers (43-24-9) - Last Week: 11
Eric Staal is finally making his presence felt in the Big Apple, but nothing has filled the void left by Carl Hagelin's speed in all three zones of play. The loss to the Penguins hurts, as Pittsburgh sits just three points shy of New York with a game in hand. Keep an eye on that PDO, too: the Rangers are sporting an NHL-high 1026.

7. Florida Panthers (42-24-9) - Last Week: 7
The Panthers struck down the Lightning for the fourth time this season Saturday to reclaim their spot at the top of the Atlantic Division. Florida finds itself in a good position, standings-wise; its last seven games come against teams outside of playoff contention. Jaromir Jagr also continues to find new ways to impress us at 44 years of age.

8. Chicago Blackhawks (44-25-7) - Last Week: 6
March has not been kind to the defending champs; five wins - two against Detroit in early in the month, Winnipeg, Calgary, and Vancouver in the last 10 days - is not how you want to enter the playoffs. Sunday was the first time the 'Hawks have won back-to-back games in almost a month.

9. Tampa Bay Lightning (43-27-5) - Last Week: 12
Nikita Kucherov has been the focal point of the Lightning offense, and rightly so, but Ondref Palat is quietly putting together a fantastic finish to the season: the 25-year old has acrued a 7-7-14 line with a plus-9 rating over his last month of play.

10. Nashville Predators (39-23-13) - Last Week: 13
A 4-1 loss to Washington last week is the only blemish on the Predator resume the past six games. With the Blackhawks continuing to struggle in that third Central playoff spot, we might just witness a race into early April now that the Preds offense has reawakened. A big part of that is the playmaking from their second line center: since arriving in Nashville, Mike Ribeiro has posted consecutive 40-assist seasons.

11. Pittsburgh Penguins (42-25-8) - Last Week: 8
Pittsburgh has won eight of its last nine contests and supplanted the Islanders as the third party involved in the Metropolitan playoff picture. And hey, look who finally decided to show up!

12. New York Islanders (40-25-9) - Last Week: 10
A mid-March slump forced the Islanders into a wild card spot, but they're still very much a contender if they can figure out the goaltending situation. Since Jaroslav Halak went down with an injury on Mar. 8, Thomas Greiss has struggled as a full time starter.

13. San Jose Sharks (41-28-6) - Last Week: 9
The Sharks have been a streaky squad all year, and right now looks like a valley; the Fins have dropped three consecutive games. San Jose has been the best team with a losing record at home this year. That 16-18-3 mark is a big question mark heading down the stretch.

14. Boston Bruins (40-28-8) - Last Week: 16
The big, bad B's are in a tough spot. A 3-1 over the Maple Leafs ended a five-game slide, but the Red Wings sit three points back with a game in hand. The once-mighty Boston power play failed to score on the man advantage in all five of those contests, a concerning stat given how much Boston has relied on special teams this season.

15. Philadelphia Flyers (36-25-13) - Last Week: 16
The Flyers might be back from the dead, but that pulse is quickly weakening. Losses to the Blue Jackets and Coyotes in two of their last three games isn't helping matters, but the Flyers still have a game-edge over the Red Wings.

16. Detroit Red Wings (37-27-11) - Last Week: 15
The Red Wings have struggled mightily on offense, but defense and goaltending has faltered in the past few games: 16 goals against in its past three outings is not what Detroit needs to make the playoff push. The Wings will likely need to win five of their last seven games to secure a spot; maybe a visit from a living legend will help give them an added push.

17. Minnesota Wild (37-28-11) - Last Week: 17
A push in the second half of March has the Wild playing like a postseason squad. Minnesota has won five consecutive contests and holds a five-point lead on rival Colorado, a team it bested 4-0 on Saturday.

18. Colorado Avalanche (38-33-4) - Last Week: 18
We've reached crisis mode in Colorado - the widening gap between the Avs and the Wild feels even more expansive considering the burgandy and blue have the hardest remaining schedule. I'll give you a hint: they play five games against teams in the top five portion of these power rankings.

19. Carolina Hurricanes (33-28-15) - Last Week: 19
Carolina's 15 losses after regulation lead the league, and one can't help but wonder if things might have turned out different had a few of those games gone its way. Of course, a combined .907 save percentage by Cam Ward and Eddie Lack certainly didn't help.

20. New Jersey Devils (36-32-8) - Last Week: 20
Ray Shero now has the unenviable task of rebuilding a team that has no forseeable avenue of success. The Devils roster is a Frankenstein monster built around the extremely capable body of Cory Schneider, but limbs like Michael Cammalleri and Patrik Eliáš have seemingly been damaged beyond repair. There can't be many body parts left in whatever grave Lou Lamoriello was robbing until last summer, so Shero's work is cut out for him.

21. Arizona Coyotes (34-34-7) - Last Week: 22
Is Mike Smith officially back? Four games is a narrow field of study, but it looks like muscle core surgery and a full recovery period have worked wonders for the former Olympic Gold Medal winner.

22. Ottawa Senators (34-33-9) - Last Week: 21
With the playoffs out of reach, the Sens have decided to pull Dion Phaneuf and Clarke MacArthur for the remainder of the season. If MacArthur had just sat out when he first experienced concussion symptoms back in October, this could have been a very different year for him and, by extension, the Senators.

25. Winnipeg Jets (31-38-6) - Last Week: 29
Winnipeg might have jumped a few spots in this week's rankings, but don't for a second think that it isn't going for Auston Matthews. The tank continues.

26. Calgary Flames (31-38-6) - Last Week: 24
On the other end of the spectrum, it looks like Calgary is vowing to go down with the sinking ship that was the 2015-16 season. I'll say this again for those that have been living under a hockey rock: if the Flames find a worthwhile goalie, this team is going places.

27. Columbus Blue Jackets (30-37-8) - Last Week: 26
Michigan was elimated in the NCAA Midwest Regional Final on Saturday in Cincinnati, so expect Columbus to sign last year's first round pick Zach Werenski to give him experience before the end of the season. Smart move.

28. Toronto Maple Leafs (27-36-11) - Last Week: 30
The Leafs are in a similar situation with Minnesota-Duluth's Tony Cameranesi. Should they sign him? My gut says yes, but that well of available contracts is starting to run dry.

29. Vancouver Canucks (27-35-13) - Last Week: 25
Vancouver has been shut out four times during its current, seven-game losing streak. Thanks for coming out, boys.