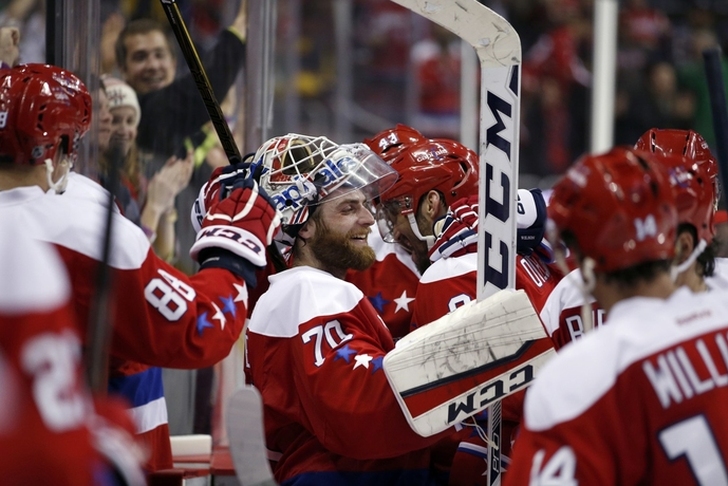 Just under three weeks remain in the NHL regular season, and the playoffs are all but set. Philadelphia and Detroit are are sparring for the final spot out East, while the Wild and Avalanche are separated by just one point in the West. The Capitals are still holding down the top spot and the Penguins have been the hottest team in the league for two weeks straight.

Below are the Chat Sports NHL Power Rankings for the week of March 21. Remember to chime up in the comments section.

1. Washington Capitals (51-15-5) - Last Week: 1
It might have been the worst loss of the season, but it's a lesson worth learning. The Caps are going to take the President's Trophy, but handling adversity late in the season will help when the playoffs hit and every game is a battle. Oh, and Braden Holtby is only seven games away from the fabled 50-win season. It's no surprise that he's taken a step forward the last two seasons with eclectic coach Mitch Korn holding the reigns.

2. Dallas Stars (43-21-9) - Last Week: 3
Missing John Klinberg for a few weeks hurt, but two wins in a row over the Islanders and the Lightning have the Stars back on the winning track. They still have a hold on the top spot in the West, but the Kings, Blues, and Blackhawks aren't far behind. And now that Tyler Seguin is out for at least the rest of the regular season, maintaining the conference lead will be a nightly fight.

3. Los Angeles Kings (44-22-5) - Last Week: 5
Four wins in a row and a clinched playoff spot have the Kings feeling like royalty. Only three of Los Angeles's last nine games come against teams with the playoff picture, which gives it an excellent opportunity to take top honors in the West.

4. St. Louis Blues (42-22-9) - Last Week: 2
Jake Allen's nine goals allowed on his last 43 shots opened the door for Brian Elliott as he returned from the IR. His shutout of the Canucks on Saturday puts him back in the driver's seat in what has been a crazy up-and-down, injury-riddled year for the Notes.

5. Anaheim Ducks (40-22-9) - Last Week: 6
The Ducks are primed for another strong postseason run, but making it to the second or third round again isn't going to cut it for Bruce Boudreau's talented team. It's been nine years since Anaheim secured its first Stanley Cup, and this year's squad has the tools to do it again: the third-best Corsi-for percentage in the league (52.95), Ryan Getzlaf and Cory Perry inability to stop scoring since Boudreau seperated them around Christmas, and both goaltenders playing fantastic hockey. The icing on the cake is the fourth-lowest PDO (save percentage plus shooting perentage) which usually regresses to the mean. Sounds like it's a good day to be a Duck.

6. Chicago Blackhawks (42-24-7) - Last Week: 4
The 'Hawks have dropped all four games versus the Wild this year. But before you feel bad for Chicago, remember that the Windy City crew has knocked the State of Hockey out of the playoffs the last three seasons. The Blackhawks have dropped five of ther last six decisions (albeit to quality competition) but that's not the kind streak you want to hold heading into the playoffs.

8. Pittsburgh Penguins (40-24-8) - Last Week: 14
A 6-2 blowout of the best team in hockey was the exclamation mark on the Penguins' current six-game win streak. Watching this live broadcast was a treat, especially the highlight-reel goals by Bryan Rust and Tom Kuhnhackl. This is a team that's starting to believe, and when you've got depth guys tossing out give-and-go passes like Sidney Crosby, it puts the rest of the league on notice. Beware the Penguins in April.

9. San Jose Sharks (41-25-6) - Last Week: 12
Brent Burns's career season continues. He passed Sandis Ozolinsh's franchise mark for points by a defenseman in a season with his 65th on Saturday. Joel Ward potted goal number 20, Tomas Hertl has seven points in his last five contests, and James Reimer earned his first shutout with his new squad (and has a brand-spanking new mask, to boot). Contributions from all over the roster are helping the Sharks position themselves for a long playoff run.

10. New York Islanders (38-23-9) - Last Week: 8
The Isles have dropped five of their last six contests at a particularly inauspicious time. Five of their remaining games come against teams whose playoff hopes are alive, and that's not counting two meetings with the surprisingly competitive Hurricanes. The problem here is offense - after scoring 13 goals in its first three March matchups, New York has posted just 12 goals in seven games since.

11. New York Rangers (40-24-8) - Last Week: 11
The Rangers sit just three points ahead of their inner-city rivals, but the Isles hold two games in hand. Henrik Lundqvist has given his team a chance to win night in and night out, but something just isn't right in that New York locker room. I wonder what the Vegas odds are on Henrik Lundqvist never winning a Cup in his storied career; they've got to be increasing daily.

12. Tampa Bay Lightning (41-26-5) - Last Week: 10
A 5-4-1 line over its last 10 games isn't particularly pretty for Tampa Bay, but shutting out the Coyotes on Saturday certainly helps. Nikita Kucherov's marvelous campaign continues, and he sits just seven points back from his career-high 65 he set last year.

13. Nashville Predators (36-23-13) - Last Week: 13
Pekka Rinne has shaken his early-season woes with a 9-1-3 mark in his past 13 appearances, and his .931 save percentage ranks fourth among goalies with five wins or more in the past calendar month. Nashville's destiny is in its own hands: seven of its final 10 games will be played against current playoff teams, including two road games against the Stars and one against the Penguins. A six-point buffer with the Wild and a game in hand helps, but realistically, six or seven of these contests need to be wins to maintain a wild card spot.

14. Boston Bruins (39-26-8) - Last Week: 9
A three-game road trip put the Bruins up against the top teams in the Pacific Division, and each visit resulted in a loss. All the talk is on the Islanders holding onto a wild card spot but the reality is that Boston is the team with the most to lose; it has a one-point lead over New York but has played three more games than the blue and orange. Upcoming away games with the Rangers, Blues and Blackhawks will likely decide if the B's will slide down to one of the final two spots in the East.

15. Detroit Red Wings (36-25-11) - Last Week: 15
For the moment, the final playoff spot in the Eastern Conference is contested by two teams with wings prominently displayed on their logos. Detroit has the edge, but the Philadelphia has two games in hand. The Red Wings have alternated pairs of wins and losses over their last eight games - which included a loss to the Flyers - but shot quantity is still a concern.

16. Philadelphia Flyers (34-24-12) - Last Week: 16
Three points separate the the Flyers from a playoff berth. They're 5-2-1 this month and have fought their way back into the picture. Shayne Gostisbehere is a big reason Philadelphia is relevent: he's got four points in his last six games and should be in serious consideration for the Calder. As an added bonus, according to the linked Courier-Post article, Gostisbehere says doesn't care about the Calder honors because he just wants to win the Stanley Cup and was quoted as saying "I don't want to have to buy a drink in this city ever again." That's some sound reasoning that I think we can all get behind.

17. Minnesota Wild (34-28-11) - Last Week: 17
The race for the final wild card spot out West is as tenuous as the one in the East. A shootout win in Chicago was just what the doctor ordered and keeps the Wild paced with the Avalanche, who lead them by a single point. Mark Mar. 26 on your calendars - that's when they visit the Avs for the final time this season.

18. Colorado Avalanche (38-31-4) - Last Week: 18
Gabe Landeskog returned from suspension in a big way Sunday, and the Avs maintained their lead over the Wild in the playoff hunt. This is the part where I once again tell you that Colorado's awful possession numbers - a league-worst 44.10 Corsi-for percentage - makes its playoff push incredibly unlikely, and dependent on quality goaltending. Seymon Varlomov and his .940 save percentage over his last five starts are a big reason the Avs are where they are.

19. Carolina Hurricanes (31-27-14) - Last Week: 19
Four straight losses - three in overtime or a shootout - have stalled any hope of a late-season push by the 'Canes. Goodnight, Raleigh.

20. New Jersey Devils (35-31-7) - Last Week: 20
Devante Smith-Pelly's unlikely rise has ruffled feathers in Montreal, and rightly so - 10 points in nine games on an offensively-starved squad is an impressive feat for a guy who had just 12 points in 46 games with the Habs. It's an encouraging sign for the Devils as they look forward to a playoff push next season.

21. Ottawa Senators (34-31-8) - Last Week: 21
The Senators are still technically in the hunt, statistically speaking, but a date with the Caps on Tuesday should be reality check enough for fans to focus on next year. Andrew Hammond's 30-save blanking of the Canadiens Saturday is an encouraging sign.

22. Arizona Coyotes (31-34-7) - Last Week: 24
The 'Yotes' offense has inexplicably dried up. Michael Stone provided a temporary, offensive boon from the blueline (back-to-back two-point efforts last week), but no one can find the back of the net now. It might help if future star Anthony Duclair would take more than 88 shots in 71 games played this year.

23. Montreal Canadiens (33-34-6) - Last Week: 22
With only three wins to show for the month of March (two of which were against the Sabres), Montreal has definitively taken a dive on the season. Ticket prices have fallen to an embarrassing low. When does the CFL season start, again?

24. Calgary Flames (31-35-6) - Last Week: 28
Sean Monahan and the Flames have been hot offensively - the third year center has 16 points in his last 14 contests. Calgary has 18 goals in its last four contests, and a continuation of this trend would bode well for next year. Now, where to find a goaltender...

25. Vancouver Canucks (27-32-12) - Last Week: 23
Two straight goalless appearances tell you all you need to know about a Vancouver squad that's been on the decline for quite some time. Three-straight 30-plus save efforts have been rendered meaningless for Ryan Miller, who has found his stride too late in the year - and, really, his career - for it to matter.

26. Columbus Blue Jackets (29-35-8) - Last Week: 25
Columbus has registered more than two goals just once in its last five contests. The focus will be on the future once more. Let's just hope the Jackets don't do something stupid like, say, trade Alexander Wennberg, who has eight points over his last nine games.

28. Edmonton Oilers (29-39-7) - Last Week: 29
Do you give Connor McDavid a shot at the Calder, despite missing three months with a clavicle injury? Conventional wisdom says no, but it's hard to deny the rookie's dazzling talent in the games for which he's actually dressed.

30. Toronto Maple Leafs (25-35-11) - Last Week: 30
Wins over the Lightning, Red Wings, and Islanders over the past two weeks prove that the Leafs are capable of competing. Maturation of a few AHL young guns and a resolved goaltending situation should have Toronto in the playoffs by 2018. A bold prediction, but certainly attainable.