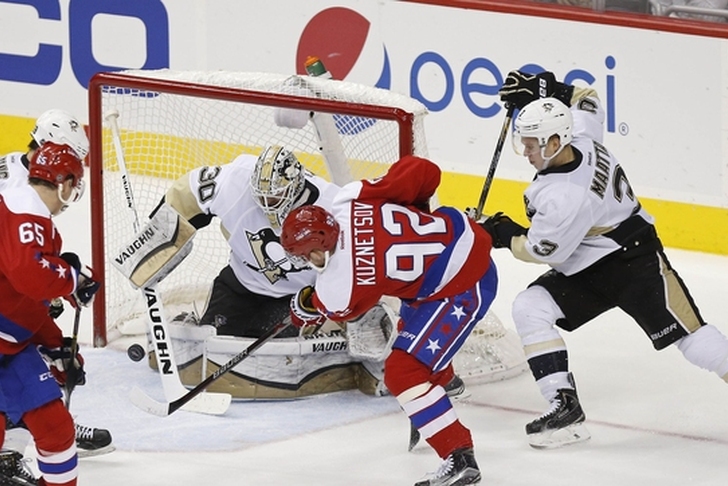 We're just four weeks away from NHL playoff goodness. The contenders are close to being set, but the seeds are certainly not, which makes these last few games important for even the division leaders. The Lightning and Rangers suffered the biggest setbacks, while the Blues and Kings jumped three spots each. And - surprise! - Capitals are still the undisputed leaders.

Below are the Chat Sports NHL Power Rankings for March 14. Remember to speak up in the comments section, or make your views heard on Twitter.

1. Washington Capitals (49-14-5) - Last Week: 1
The Caps have posted a middling 5-4-1 line over their last 10 contests but still hold an impressive 12-point lead in the standings over the Blues and Stars, even in the face of injury issues on the back end. They haven't lost back-to-back games in regulation yet this season.

2. St. Louis Blues (41-20-9) - Last Week: 5
Like the Capitals, the Notes have a slew of skeptics to prove wrong come postseason play, and St. Louis is doing everything in its power to prove them wrong as the final few weeks of the season come into sight. The Blues have won six-straight and leading scorer Vladimir Tarasenko has been a menace recently, posting six points in his last three games, wins over the Stars, Ducks, and Blackhawks.

3. Dallas Stars (41-20-9) - Last Week: 3
An average 4-3-3 stretch for the co-leaders of the Western Conference is a bit concerning, as is the inconsistent play of the once rock-solid Anti Niemi. Kari Lehtonen has seemed to exercise the demons that plagued him earlier in the season, though, and has been the hot hand for the last few weeks; he has surrendered just 10 goals in his past five appearances.

4. Chicago Blackhawks (41-22-6) - Last Week: 2
The 'Hawks have cooled off a touch recently but still enter the home stretch as arguably the most talented team in the league. Artemi Panarin's 62 points lead all rookies and he is still a favorite to win the Calder. An underrated guy coming into training camp from the KHL this past offseason, Panarin certainly shares a similarity Russian great Pavel Bure, who said Panarin reminds him of himself. That's high praise from a fellow countryman and seven-time All-Star.

5. Los Angeles Kings (40-22-5) - Last Week: 8
The Kings will look to rebound from an overtime loss to the Devils on Saturday. Anze Kopitar has six points in his last five games and leads the team in points with 59 in 66 games played.

6. Anaheim Ducks (37-21-9) - Last Week: 4
The Ducks rank second in Corsi and Fenwick-for models and have continued to churn out a quality on-ice product. They also have the best special teams units in the league. And though Frederik Andersen and John Gibson looked decidedly human in each of their last starts - both losses - Anaheim will rebound; after playing the Bruins and Rangers this week, it gets seven teams in a row that are decidely out of playoff contention.

7. Florida Panthers (38-21-9) - Last Week: 10
Daylight savings be damned; Jaromir Jagr's workout schedule knows no bounds, kind of like his scoring ability at age 44. His assist versus the Bruins on Monday propelled him into sole possession of third place on the NHL all-time scoring list.

8. New York Islanders (37-21-8) - Last Week: 9
Johnny Tavares's 200th goal of his career wasn't enough to lift the Isles over the B's Saturday, but they're still an underrated threat out East. The Islanders sit just three points back from their in-city rivals with three games in hand, and could make a move for home ice advantage barring a late-season surge from the Penguins or Flyers. It looks like we might be gearing up for a Manhattan/Brooklyn opening round of the playoffs.

9. Boston Bruins (39-23-8) - Last Week: 11
After a rough start to the season, 19-year old David Pastrnak is white hot with four goals in his last four games. The Bruins will be going through the ringer with five games in the next 10 days versus teams in the top 12 of these power rankings.

10. Tampa Bay Lightning (40-24-5) - Last Week: 6
The Bolts dropped three-straight contests before shutting out the Blue Jackets on Sunday, a game in which Ben Bishop elicited boos for the entire evening. Sometimes it's fun to be the bad guy.

11. New York Rangers (39-23-7) - Last Week: 7
Rick Nash is back but the Rangers have struggled to find a place for him in the lineup and he has nothing to show for it in the points column. They've dropped their last two games, once in overtime to the Red Wings and again to the Penguins. Possessing the puck has been an issue for the Rangers this season and they've relied too long on goaltending to bail them out. Like Boston, New York's schedule over the next few weeks is daunting.

12. San Jose Sharks (38-24-6) - Last Week: 12
The Sharks are grasping to the final spot in the Pacific and a 5-2 win over the NHL-best Caps was just what the doctor ordered. Joe Thornton acheived dish history, becoming just the 16th player in NHL history to record 10 or more seasons with 50 assists.

13. Nashville Predators (34-22-13) - Last Week: 13
Losses to the Flames and Canucks have marred what was a nice recovery by the Western Conference's easternmost team. After recording 14 goals in as many games, Filip Forsberg has cooled off a bit. He hasn't tickled twine in three games now, though he'll have another chance against the porous Edmonton defense tonight.

14. Pittsburgh Penguins (36-24-8) - Last Week: 14
The Penguins hold the first wild card spot in the East, but their sights are set higher - they've got a game in hand on the Lightning and sit just five games back. It'll likely be a photo finish as Pittsburgh's offense has exploded for 3.65 goals per game over its last eight contests. Marc-Andre Fleury has done his part between the pipes, and became the 20th goaltender in NHL history to hit the 350 victory plateau with his 3-2 win over the Jackets on Friday.

15. Detroit Red Wings (34-24-11) - Last Week: 15
Petr Mrazek has rebounded nicely with three-straight perfomances with a save percentage of .920 or better, but the offense needs to get going. Detroit has 13 goals in six contests this month, and unless Motown picks up the shot pace, it will be relying on its 22-year old goaltender to carry them to the final playoff spot in the East.

16. Philadelphia Flyers (32-23-12) - Last Week: 16
The Flyers are, in reality, the last team on the outside of the playoff picture with a legitimate shot at securing a spot. A date with Detroit on friendly ice tonight is a chance to make up some ground and they've got two games in hand over Hockeytown. It might have seemed far-fetched a few months ago, but Philadelphia is in control of its own destiny.

17. Minnesota Wild (32-27-10) - Last Week: 17
It's a tooth-and-nail, bareknuckle brawl for the last wild card slot in the West. Minnesota is winning that battle so far - tied at 74 points with Colorado but with a game in hand - but it needs to Devan Dubnyk to continue playing at a high level. While Dubs might be suffering from a slight case of regression to the mean, he has been having a fine season. The All-Star can once again be the main reason his team secures a playoff berth.

18. Colorado Avalanche (35-31-4) - Last Week: 19
The Avalanche laugh at fancy stats. In fact, I'm pretty sure that Patrick Roy thinks that Corsi is small breed of dog found somewhere in Western Europe. But there's no denying the Avs are making an admirable push for that last playoff spot in the West. How much of a bummer would it be if the Avs miss the playoffs for the second season in a row despite earning 90 points in the standings? The lesson here is that playing in the Central is a brutal affair.

19. Carolina Hurricanes (31-26-12) - Last Week: 18
The clock is about to strike midnight on this Cinderella. Optimists will point to the fact that Carolina just five points back from Detroit, but hopes and wishes don't move you up in the standings. Goaltending has been better in March, but it needs to be excellent to secure that last spot from Detroit. And don't forget, the Canes have to usurp the Flyers, too.

20. New Jersey Devils (33-29-7) - Last Week: 20
It's gloom and doom in New Jersey with Cory Schneider out for another few games. Even if he returns ahead of schedule from his MCL sprain, it's too little, too late for the Devils.

21. Ottawa Senators (32-30-8) - Last Week: 21
Andrew Hammond has delivered a number of quality performances between the pipes recently, which gives is a good sign moving forward. They're betting on the Hamburgler to the guy in Ottawa for years to come. Erik Karlsson has 70 points in 70 games this season, eight points shy of his career best four years ago.

23. Vancouver Canucks (27-28-12) - Last Week: 23
The Canucks will attempt to secure that illusive third-straight win tonight versus the Jets. There's no time like the present!

24. Arizona Coyotes (30-32-7) - Last Week: 24
Mike Smith made his return in spectacular fashion, a 44-save shutout against Edmonton. Louie Domingue proved he could handle an NHL workload in Smith's 40-game absence, which bodes well for next season's eventual goaltending tandem.

25. Columbus Blue Jackets (28-33-8) - Last Week: 25
This was the most exciting thing to happen to Columbus this weekend. At least the Jackets still have the best social media team in North American professional sports.

26. Buffalo Sabres (28-33-9) - Last Week: 26
Rick Jeanneret's call of Jack Eichel's first overtime goal makes you want Buffalo to be a contender right now. Thank goodness the Sabres will have him back in the booth next season.

28. Calgary Flames (28-35-5) - Last Week: 28
As I've been saying all year, the Flames are in goaltending crisis mode. Snag James Reimer for cheap, trade for a promising prospect or take a chance in the draft, and pray.

29. Edmonton Oilers (27-37-7) - Last Week: 29
Someday, hopefully soon, the Oilers will return to glory and be a competitive force out West. Today is not that day.

30. Toronto Maple Leafs (23-34-11) - Last Week: 30
You'll be hearing this a lot in the coming months: the Leafs' success will be determined by how quickly and effectively they can develop their young talent.