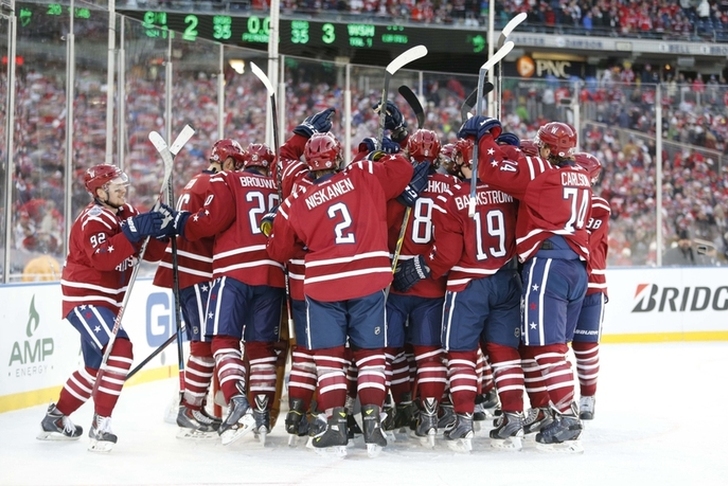 It's the first Monday of 2016, which brings with it the first Chat Sports NHL Power Rankings of the year. The Washington Capitals have resolved to hold the Dallas Stars off for the No. 1 spot and remain atop the standings for the third-straight week. The Panthers, Blackhawks, and Wild all continued to climb the standings, while the Ducks were the big winners this week, moving up nine spots in the standings. The Rangers, Senators, and Flyers all dropped significantly. Without further ado, here are this week's NHL Power Rankings for the Week of January 4.

1. Washington Capitals (28-7-3) - Last Week: 1Back to back losses to the Hurricanes and Blue Jackets are the only blemishes in the past three weeks for the Caps. The workload might be starting to catch up to Braden Holtby, who looked suspect in the latter contest, but he'll have a few days to recover with only the Bruins on the schedule in the next few days.

2. Dallas Stars (28-9-4) - Last Week: 2
Though it maintains a slight points lead on Washington, Dallas is has played three more games than our nation's Capital. The Stars have also hit a mini skid as of late, losing three of their last four including an unsightly, 6-3 loss to Columbus. At least it appears as that Antti Niemi is pulling ahead as the starting goalie, providing some much-needed consistency in the blue paint for the Stars. Though he's won just one of four starts since his shutout vs. Chicago Dec. 22, he's posted a sub-.900 save percentage just once in that span.

4. Florida Panthers (23-12-4) - Last Week: 6
"New Year, new me." - the Panthers, probably. Florida has won an astounding nine-straight contests and shows no signs of slowing down, especially considering they play the Sabres, Oilers, Flames, and Canucks in the next 10 days. Aleksander Barkov's breakout season is a large part of this, and he has 10 points in his last nine games.

6. St. Louis Blues (23-14-4) - Last Week: 3
Jake Allen has allowed more than two goals just once in his last five starts, but the Blues offense has hit a snag, scoring one goal or less in three of their last four games. Despite having the sixth-most man games lost as of Saturday (135) and enduring a bit of a goaltending competition the first half of the season, the Blues have, thus far, weathered the storm.

7. Minnesota Wild (20-11-7) - Last Week: 9
The New Year hasn't been kind to the Wild so far as they've dropped their opening two games by one-goal margins, but they've stayed a largely-competitive team so far in a grab-bag kind of season. Despite just two wins in his last seven starts, Devan Dubnyk has been nothing short of spectacular and now owns a .921 save percentage on the year to go along with four shutouts.

Thomas Greiss has surrendered nine goals in his last two starts and it appears that his run will come to an end soon with Jaroslav Halak due back from injury any day now, but let's not forget his string of 30-plus save starts and a shutout to keep the Islanders afloat.

9. New York Rangers (21-14-4) - Last Week: 5
The Rangers boast just three wins in their last 10 contests. The defense needs to do a better job of maintaining the lead (getting Dan Girardi fully healthy would help) and Henrik Lundqvist needs to return to his old, consistent self if the Blueshirts want to get back into serious contention in the Metropolitan Division.

11. New Jersey Devils (20-14-5) - Last Week: 16}
Cory Schneider's .927 save percentage is good for ninth among goalies with at least 10 starts. He's the reason the Devils and their fourth-worst offense (2.33 goals per game) are in playoff contention, though one wonders how long he can keep this up.

12. Detroit Red Wings (19-13-7) - Last Week: 7
Another team with just three victories in 10 previous tries, the Wings just can't seem to get that offense clicking. Two abysmal starts by Jimmy Howard have opened the door for Petr Mrazek who, with the exception of a four-goal outing against the Penguins, has been lights-out otherwise. Perhaps continuing inspired play from his end can spark the team.

13. Boston Bruins (20-13-4) - Last Week: 10
When the league's third-best offense scores one goal or less in three of its last five outings, you know the results won't be pretty. The Bruins have come back down to Earth a bit here recently.

14. Nashville Predators (19-13-7) - Last Week: 14
The Preds rank 15th and 16th in goals for and against per game, respectively, putting them smack-dab in the middle of the NHL in terms of standings. As previously mentioned in power rankings of weeks past, Pekka Rinne is mostly to blame for this mediocre showing; a blueline anchored by Shea Weber and Roman Josi is better than 16th.

16. Tampa Bay Lightning (19-16-4) - Last Week: 15
Another team that struggled mightily in November, Tampa Bay has looked a bit more like its old self in recent weeks. The Bolts have earned points in six of their last 10 games and their only bad loss in that span came at the hands of the Canucks.

17. Ottawa Senators (18-15-6) - Last Week: 13
With just one win in their last six contests, the Sens now find themselves on the outside looking in as they chase that final wild card spot. They've been blanked in two straight games, and despite double-digit shooting percentages from Ottawa's top eight scorers, the fact remains that 27.8 shots per game (28th in the NHL) just isn't enough, while they're allowing far too many on their own net.

18. Arizona Coyotes (18-16-4) - Last Week: 18
Speaking of teams who don't like to take shots, the Coyotes have been surprisingly competitive as of late. They've registered a 5-2-3 record over their last 10 games and if the regular season were to end right now, they'd actually own the fifth seed in the Western playoff picture. No, that's not a typo - the Pacific Division is just that bad. On the lighter side, John Scott said he'll play in the All-Star Game! ... right before he was a healthy scratch Saturday against Edmonton.

19. Anaheim Ducks (16-15-7) - Last Week: 28
It's about time! The Ducks are finally above .500 in regulation play and have crawled out of the Pacific cellar to join the rest of the league. Luckily for Anaheim, the West is weak this year and that holds especially true in the Pacific. The Ducks have played into the third divisional playoff position and, with John Gibson continuing to turn heads in the crease (two shutouts in a row to close out 2015), they could be primed to climb the rankings.

20. San Jose Sharks (18-17-2) - Last Week: 20
A win over the Kings on the on Dec. 22 has been marred by losses to the Avalanche and Jets since. The Sharks have also allowed four or more goals in five of their last seven contests, which won't win you many games at this level.

21. Colorado Avalanche (18-18-3) - Last Week: 23
Not to be left out, the Avalanche sit just one game out of playoff contention and have gone 6-2-2 in their last 10 games. Semyon Varlamov has stumbled with two sub-.800 showings in his last four starts, but the Avs have found ways to win this year and still somehow have a goal differential of minus-one on the season, which bodes well for their chances moving forward.

22. Vancouver Canucks (15-15-9) - Last Week: 22
Poor Jake Virtanen. Something tells me he won't be returning from the World Juniors to find much winning, either.

23. Calgary Flames (18-18-2) - Last Week: 21
The Flames actually have a winning record over their last 10 contests and remain in contention to sneak into a playoff spot if they can catch fire (I'm sorry). The Flames set a Franchise-record with 11-straight home wins that came to an end just before the New Year.

The Leafs are 6-2-2 in their last 10 and Jonathan Bernier can breathe a deep sigh of relief - he has two straight wins under his belt - both 39-save efforts - and is looking a lot more like the guy Toronto traded for a few years ago. Toronto still has a long way to go, but there's light at the end of the tunnel and a stable goaltending situation will expedite the franchise's recovery.

25. Philadelphia Flyers (15-15-7) - Last Week: 19
The Flyers have dropped four of their last five and are sinking back into their old ways. Dave Hakstol shelved NHL save percentage leader Michal Neuvirth for former starter Steve Mason for a spell in late December, and after three-straight sub-.900 performances from the latter, it's looking like that was a mistake.

26. Carolina Hurricanes (16-17-6) - Last Week: 24
All but one of the Hurricanes losses in the past month have been by the difference of one goal, which is certainly an encouraging sign. Cam Ward's game has come alive in the last few weeks bringing flashes of his early career in Carolina with it, and if the Canes have any hopes of an improbable playoff push, it starts with him maintaining that level of play.

27. Winnipeg Jets (18-19-2) - Last Week: 27
The Jets' inability to play effectively in special teams situations is a large part of why they've dropped like a rock in the standings over the last month-plus. They own the second-worst power play and penalty kill conversion percentages in the league and until those marks get better, they better get used to the basement.

28. Buffalo Sabres (15-20-4) - Last Week: 26
Four-straight losses and Evander Kane being the subject of a sexual assualt investigation have the boys from Buffalo reeling.

29. Edmonton Oilers (16-21-3) - Last Week: 29
Here's a fun, mildy-terrifying fact for you readers: the Oilers are just two points from dead last in the NHL, yet 5 points from swiping the final playoff spot out West from the Ducks. Huh.

30. Columbus Blue Jackets (15-22-3) - Last Week: 30
Back-to-back wins over the best two teams is a nice way to ring in the New Year, but it'll take more than good feelings for the Jackets to be competitive again.