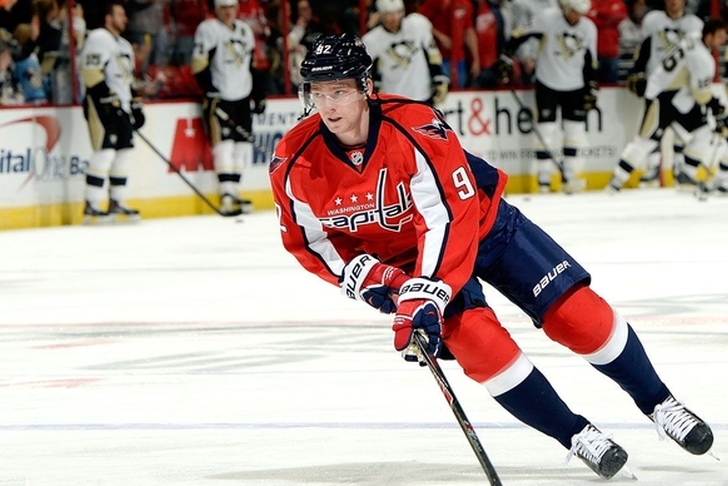 As the All-Star break fast approaches, NHL teams continue to duke it out for the final playoff positions in both conferences. The Capitals and Blackhawks are still our frontrunners in the East and West, respectively, while the Devils, Sharks and Avalanche each made significant gains this past week. The Coyotes, Canadiens and Flyers also moved a number of spots in the standings, though in the wrong direction. Below are the NHL Power Rankings for the week of January 25. As always, make your voice heard in the comments section.

1. Washington Capitals (35-8-3) - Last Week: 1
Though the Caps' last two games have been postponed due to some wicked snowfall along the East Coast, they've still got a firm hold on the top spot. Washington has lost just twice in the new year and is riding a two-game win streak. Evgeny Kuznetsov has seven assists in those two contests, and Braden Holtby has continued to backstop his team with excellent play between the pipes.

2. Chicago Blackhawks (33-15-4) - Last Week: 2
Yet another sexual assault accusation has been levied against Patrick Kane, though the authenticity of this one can't be determined and it's possible he was on a flight back to Chicago with his team at the time of the alleged incident. Despite this year's off-ice issues, he's still putting up dynamite numbers, leading the NHL in goals (30) and assists (43). The 30-mark is a career high for the 27-year old.

3. Dallas Stars (30-14-5) - Last Week: 3
The Stars have been victorious in just one of their last six contests and have averaged a lackluster two goals per game in that span. That's not the kind of play you expect out of a team that ranks second in shots and goals-for per game.

4. Los Angeles Kings (30-15-3) - Last Week: 4
After dropping two to the Wild and Coyotes, the Kings bounced back Sunday with a 3-2 overtime win versus the Sharks to earn Jhonas Enroth his first win since November. Make no mistake; Jonathan Quick is still the man in L.A., but he's posted two straight sub-.900 save percentage performances in a pair of losses.

5. Florida Panthers (28-15-5) - Last Week: 5
Convincing wins over the Blackhawks and Lightning have the Cats back on track after a four-game skid. Jaromir Jagr will be going to the All-Star Game, albeit reluctantly. And have we finally found the source of his mystical, ageless power? (Hint: it involves midnight skates and a whole lot of ankle weights)

6. St. Louis Blues (28-16-8) - Last Week: 6
Brian Elliott has been nothing short of spectacular since Jake Allen went down with an injury the Friday before last, especially in his 40-save effort in a 2-1 shootout loss Jan. 22. The Blues' possession stats are solid (ninth in Corsi-for percentage) but they've scored just three goals in their last three contests and sport a two-game losing streak heading into the All-Star break. St. Louis' plus-one goal differential is also concerning this late into the season.

7. New York Islanders (25-15-6) - Last Week: 8
Ryan Strome's new lease on life seems to mirror his team's movement upward in these power rankings the last few weeks. Jonathan Tavares logged his eighth multi-point game of the season Friday and his first of 2016. Is this an indication of an upswing in productivity after an underwhelming first half to the season?

8. New York Rangers (26-17-5) - Last Week: 9
Alain Vigneault ghosted after his team's ugly 3-0 loss Sunday, and it's hard to blame him; the Rangers have been a tease since Thanksgiving, winning consecutive games just once in nearly two months. The decline of Dan Girardi and the blueline in general has been offset by offensive contributions from guys like J.T. Miller, who is making a serious case for a bigger role in New York.

9. Tampa Bay Lightning (26-18-4) - Last Week: 10
The Bolts ended the Blackhawks' 12-game win streak a few days ago, only to see their own streak snapped at the hands of their in-state rivals. Nikita Kucherov has 12 points in 10 games this month and it's safe to say that Tampa Bay and its key contributors are back in a big way. And it doesn't look likely that Jonathan Drouin will be joining that group.

10. Boston Bruins (25-17-5) - Last Week: 12
The B's possession stats aren't anything to write home about, but both their power play and penalty kill rank among the top five units in the league. Boston has won four of its last five outings.

11. Detroit Red WIngs (24-16-8) - Last Week: 7
Losses in three of its last four games has brought Detroit down a few spots in the standings. They still have a hold on the last Atlantic Division playoff spot, though it's a weak one with the Bruins nipping at the Wings' heels a mere point back. Petr Mrazek is seriously deserving of a dark horse Vezina nomination with his .932 save percentage and 2.03 goals-against average, both top five marks in the league.

12. New Jersey Devils (25-19-5) - Last Week: 18
Four wins in a row is a welcome change for a Devils squad that's struggled to put the puck in the net for most of the year. For his part, All-Star selection Cory Schneider is still deserving of a monument created in his likeness outside of the Prudential Center, but he'll just have to settle for the second-most wins by a goalie this season (28) on a team with the third-worst Corsi-for percentage (46.75).

13. San Jose Sharks (25-18-4) - Last Week: 16
The Sharks boast a 7-1-2 line through their last 10 and have bullied their way back into playoff contention. Oddly enough, San Jose owns the third-worst home ice record, earning just nine wins in front of friendly crowds this season. At least the Sharks can get it done on the road - a crucial quality come April.

14. Minnesota Wild (23-17-8) - Last Week: 11
The Wild are in need of a little soul searching. They've won just one game in their last seven, despite quality turns in net from both Devan Dubnyk and Darcy Kuemper. Minnesota's average of 28.5 shots per game, the fifth-worst such mark in the NHL, isn't doing it any favors.

15. Pittsburgh Penguins (23-17-7) - Last Week: 15
Maybe Minnesota could learn from Pittsburgh's example. Take a look at the five-on-five shot attempts under Mike Sullivan versus Mike Johnston. That's about as night-and-day as it gets. Since Sullivan's hiring, no team has averaged more attempts than the Penguins.

16. Colorado Avalanche (26-21-3) - Last Week: 24
Yeah, this one surprises me, too. The Avs enter the last week of January in possession of the first wild card spot in the West. Like New Jersey, Colorado has won four-straight to get to this point, and bested the Stars 3-1 Saturday for the eleventh time in their last twelve meetings. No, that's not a typo. Semyon Varlamov made a season-high 42 saves in the winning effort.

17. Montreal Canadiens (24-20-4) - Last Week: 14
A 3-2 shootout win over the Maple Leafs ended a five-game slide but Montreal's demons are far from exorcised. Carey Price will likely miss another three weeks to a month with his lower-body injury and a team that looked unbeatable heading into December is now fading faster than your grandmother watching weeknight reruns of the Ed Sullivan Show.  At least on Saturday, they were responsible for the initial tally in a contest for the first time since January 5.

18. Nashville Predators (22-18-8) - Last Week: 19
Two 4-1 road wins in a row? And Pekka Rinne was in net for both of them? It doesn't justify his All-Star inclusion, but it's nice to see the veteran netminder showing signs of improvement after a disastrous first half of the season. There's yet hope that last year's Vezina finalist will return to form and help his team to solidify a playoff spot.

19. Arizona Coyotes (23-19-5) - Last Week: 13
A quality win against the Kings helped end a four-game drought, but the Coyotes still face a number of issues; namely, power play conversion and top six forward production. It shouldn't come as too much of a surprise, then, that Shane Doan's third line has been responsible for 35 percent of the Coyotes' last 40 goals.

20. Ottawa Senators (23-20-6) - Last Week: 20
Craig Anderson followed a three-save, four-goal nightmare in New Jersey with a 35-save shutout against the New York Rangers. More importantly, Bobby Ryan helped the Jansen children get a puppy! Go on, take a wild guess at what they named it.

21. Carolina Hurricanes (22-20-8) - Last Week: 22
The Hurricanes have traded two wins for two losses over the last eight days, but sit just three points out of the final wild card spot. Not bad for a team that looked like they'd be keeping the Blue Jackets company in the basement after the first few weeks of the season.

22. Anaheim Ducks (21-18-7) - Last Week: 23
Wins versus the Wild and Red Wings have helped inch the Ducks closer to a playoff berth (they sit five points off of the last wild card spot) but they'll need to string a few wins together more often than not down the stretch. Unfortunately for Anaheim, it faces Boston, San Jose, and Los Angeles in coming days after the All-Star break. It's go time for the Ducks' dynamic duo of Corey Perry and Ryan Getzlaf to turn it up a notch. They've registered 31 and 29 points this year, respectively.

23. Philadelphia Flyers (20-17-8) - Last Week: 17
The Flyers' last five games have been decided by one goal, but they've come out on the wrong side of their most previous two contests. Mixing up the lines isn't a bad idea, but acquiring a scoring winger would be better.

24. Vancouver Canucks (20-18-11) - Last Week: 21
Vancouver has posted a respectable 5-3-2 record in its last 10 games against solid competition, but can't seem to gain much ground in the wild card race. Daniel Sedin became the all-time franchise goal leader on Thursday's two-tally effort, bringing his career total to 348.

25. Calgary Flames (21-22-3) - Last Week: 25
This is the part where I tell you Calgary's special teams play needs to be a lot better and that Johnny Gaudreau is really good. Maybe they'll let him light his stick on fire at this year's All-Star Game? Eh, probably not. The NHL already used up all of this year's Fun Points letting John Scott go to Nashville after all.

26. Winnipeg Jets (21-24-3) - Last Week: 26
Not much has changed here. Connor Hellebuyck has been fantastic, but he can't carry this team back into playoff relevance alone.

28. Buffalo Sabres (19-25-4) - Last Week: 28
Ryan O'Reilly's 15 percent conversion rate and 40 points are both team bests, but it doesn't change the fact that Buffalo has lost its last two. The Sabres face the Rangers and Senators before heading into the All-Star break.

29. Edmonton Oilers (19-26-5) - Last Week: 27
Should NHL stars be blocking shots on the penalty kill? There are good arguments both for and against putting your studs on the man-disadvantage, but nothing changes the fact that Ryan Nugent-Thompsons Hopkins is now on long-term IR.

30. Columbus Blue Jackets (17-27-5) - Last Week: 30
I really should just save a template with the Jackets pre-etched in last place so I don't waste time each week making this entry. Things will continue to get worse before they get better, Columbus fans. I'm sorry.