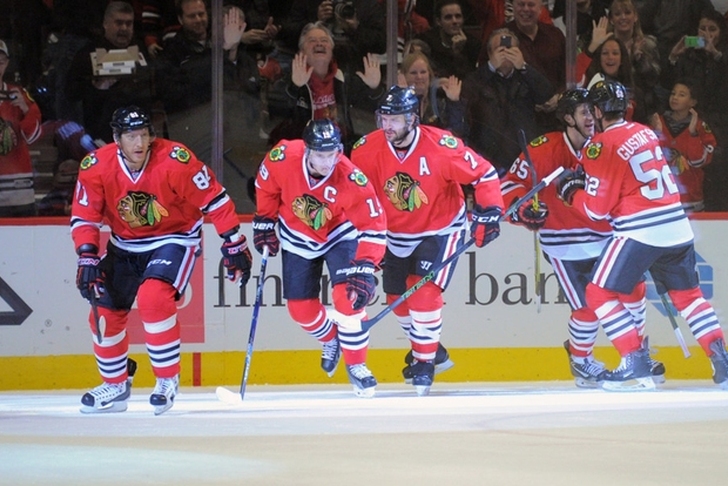 The Washington Capitals might still claim the top spot in this week's rankings, but the Chicago Blackhawks have come on strong in the new year and hold the longest active winning streak at 11. Tampa Bay and San Jose have also made significant gains in the standings, while New Jersey, Colorado, and Minnesota all took steps backwards. Below are your NHL power rankings for Monday, January 18. As always, feel free to sound off in the comments section.

1. Washington Capitals (34-8-3) - Last Week: 1
No surprise here. The Caps top six shooters are converting on 12.2 percent or more of their shots and their three leading scorers boast 40-plus points. Braden Holtby exited Sunday's game suffering from dehydration, but should be back in action this week.

2. Chicago Blackhawks (31-13-4) - Last Week: 4
With 11-straight wins, the 'Hawks are the hottest team in the league right now. Patrick Kane has nine points in his last five games and leads the league scoring race with 69.

3. Dallas Stars (29-12-5) - Last Week: 2
The Stars have hit a bit of a skid and have just three wins to show for their effort in their last 10. Dallas bench boss Lindy Ruff has decided to move Jason Spezza back onto a line with Tyler Seguin and Jamie Benn to help rekindle the league's best offense, which has been held to 11 goals in its past five outings.

4. Los Angeles Kings (28-13-3) - Last Week: 3
Besides leading in a number of possession stats, the Kings have had good goaltending, too - Jonathan Quick has turned aside 117 of the last 127 shots he's faced

5. Florida Panthers (26-14-5) - Last Week: 5
The Panthers are finally cooling off with three losses after that recent tear of 12 wins in a row. The power play needs to be better - it hasn't scored since January 2.

6. St. Louis Blues (26-15-7) - Last Week: 6
Jake Allen had the Notes' No. 1 goaltending spot locked up before a knee injury Friday sidelined him. He's considered week-to-week, and Brian Elliot will have to play in his stead. Elliot is 7-4-4 with a .919 save percentage and 2.31 goals-against average this season.

7. Detroit Red Wings (23-14-8) - Last Week: 8
The Wings have traded two wins for two losses since last Sunday. And it appears Jeff Blashill will be giving wunderkind Dylan Larkin even more responsibility now by using him more frequently on the penalty kill, a situation to which Larkin seems well-suited, given his speed.

8. New York Islanders (24-15-6) - Last Week: 10
The Islanders have been kept afloat by peripheral production, but Johnny T. needs to be better.

9. New York Rangers (24-16-5) - Last Week: 9
The Blueshirts have traded games since the start of the new year and can't seem to find any traction. Part of the reason for that is inconsistent defensive play, especially from Dan Girardi.

10. Tampa Bay Lightning (24-17-4) - Last Week: 15
Finally. Tampa Bay has gotten its stuff together and made a go of it as of late. The Bolts are winners of five-straight and Nikita Kucherov has been a big reason for it with six points in that span.

11. Minnesota Wild (22-15-8) - Last Week: 7
Minnesota's Corsi-for percentage (CF%) is 20th in the league at 48.58. The only teams higher than the Wild in these power rankings with a worse possession statline are the Rangers and Panthers, and good goaltending helps to explain success in all three of these cases. Devan Dubnyk has faced the sixth-most shots this year in the NHL (1,043) and has a respectable .921 save percentage to show for it.

12. Boston Bruins (23-16-5) - Last Week: 11
Boston has shaken off a slump to win its last two contests. They still benefit greatly from the league's best power play and convert on 27.7 percent of man advantages, though the Capitals - the only other NHL team to score on more than a quarter of man-up opportunities - is nipping at its heels.

13. Arizona Coyotes (22-17-5) - Last Week: 14
Advanced statistics aren't kind to the 'Yotes right now (they rank 26th in CF%) but they're finding a way to get it done in the desert. Though they've lost two in a row, they'll have a chance to get back to their winning ways when they host Buffalo Monday evening.

14. Montreal Canadiens (23-19-4) - Last Week: 12
Not only have the Habs kept the skid alive by losing their last four contests, but they've taken a domestic violence incident involving forward Alex Galchenyuk lightly. While they have done little to rectify that issue, the Canadiens can at least get back on the winning track with a slew of easier competition in the coming weeks; they play the Maple Leafs once and the Blue Jackets twice to finish out January, and return from the All-Star break with Flyers, Sabres and Oilers on the docket. In other news, cult hero John Scott was included in a controversial move to Montreal and promptly sent the minors, throwing his All-Star eligibility into question. Basically, the NHL is doing its best Gretchen Wieners impression this week. Boo, NHL.

15. Pittsburgh Penguins (21-16-7) - Last Week: 16
Ever since Mike Sullivan took over for the Penguins in December the offense has been respectable and the shot count is up, as evidenced in Pittsburgh's 5-0 dismantling of Carolina this past weekend. Now the challenge is stringing a few of those performances together.

16. San Jose Sharks (23-18-2) - Last Week: 24
And just like that, the Sharks are back in playoff contention. That's what five wins in a row (and playing in a weak Pacific Division) gets you. 36-year old Joe Thornton has led the charge with seven points during that streak.

17. Philadelphia Flyers (20-15-8) - Last Week: 20
The Flyers have won five of their last six, beating the Habs, Wild, Islanders, Bruins, and Red Wings to surge in the rankings. Not bad, boys.

18. New Jersey Devils (22-19-5) - Last Week: 13
Stop me if you've heard this one before - Despite poor play in front of him, Cory Schneider stands on his head and bails his team out. Well, that was the case in his 38-save shutout of the Arizona Coyotes Saturday. Despite a top five ranking in just about every goaltending statistic imaginable, Schneider can't do it all himself.

19. Nashville Predators (20-17-8) - Last Week: 17
Nashville finally gave Carter Hutton a start over struggling Pekka Rinne and wouldn't you know it, he earned a shutout against a quality Minnesota squad. As much as it might pain Preds fans and coaches alike, sitting Rinne for a while might be the answer.

20. Ottawa Senators (21-18-6) - Last Week: 18
The Senators are struggling recently. Four wins in their past 10 games and the third-worst CF% doesn't make for a winning formula. A 5-3 victory over the Kings Saturday, though, is a step in the right direction. Higher shot quality and volume is a must for these guys.

21. Vancouver Canucks (19-17-10) - Last Week: 23
Despite inconsistent play, the Canucks have managed three wins over the Panthers, Hurricanes and Islanders in their last four contests. Some scoring from someone with a last name other than Sedin would be nice, though.

22. Carolina Hurricanes (20-19-8) - Last Week: 21
Excepting the 5-0 blowout at the hands of the Penguins this past weekend, the Hurricanes have really been playing inspired hockey. Their possession metrics are way above average and they're getting the looks they want, they just need consistent goaltending from Cam Ward and Eddie Lack to back it up.

24. Colorado Avalanche (22-21-3) - Last Week: 19
When you rank last in CF% like the Avalanche, netminding is at a premium. Unfortunately for them, Semyon Varlamov's three-straight sub-.900 perfomances hasn't helped.

25. Calgary Flames (20-20-3) - Last Week: 26
Until the Flames crawl out of last place in both facets of special teams play, wins won't be very plentiful in Calgary.

26. Winnipeg Jets (21-21-3) - Last Week: 25
I think it's safe to say that Connor Hellebuyck is the real deal. The 22-year old rookie blanked the Wild for his second career shutout and boosted his save percentage to .931, the third-best mark in the league. If the Jets can outlast the injury bug that's plagued them the last few weeks, it's not too hard to envision them finding a rhythm and jumping back into playoff contention. They're just three points out of the final wild card spot, after all.

27. Edmonton Oilers (18-23-5) - Last Week: 29
Happy belated birthday to Connor McDavid, who turned 19 on January 12. While he won't be returning until after the All-Star break, the Oilers are sitting just seven points out of the final wild card spot. The Pacific's general weakness is a blessing for an Edmonton squad that's largely improved over the past few seasons, but still needs all the help it can get.

28. Buffalo Sabres (18-23-4) - Last Week: 28
The NHL implemented a new sexual assault prevention training this week and the Sabres were the first squad to complete the course. With Evander Kane's accusations looming and just three wins to the team's name in its last 10 contests, it's a rough beginning of the calendar year for Buffalo.

29. Toronto Maple Leafs (16-20-7) - Last Week: 27
After some solid play in December, Toronto has lost five in a row. Leo Kamarov became the only Maple Leaf to hit 30 points so far this year with a goal at Boston Saturday.

30. Columbus Blue Jackets (17-25-4) - Last Week: 30
Though his first three games as a Blue Jacket resulted in no points and a minus-three rating, Seth Jones seems to be finding his stride with an assist in his last two contests. Barring a miracle in the second half of the season, Columbus is finished, though it can still get Jones some quality work on special teams and cultivate a true No. 1 blueliner - something the team has lacked for quite some time.