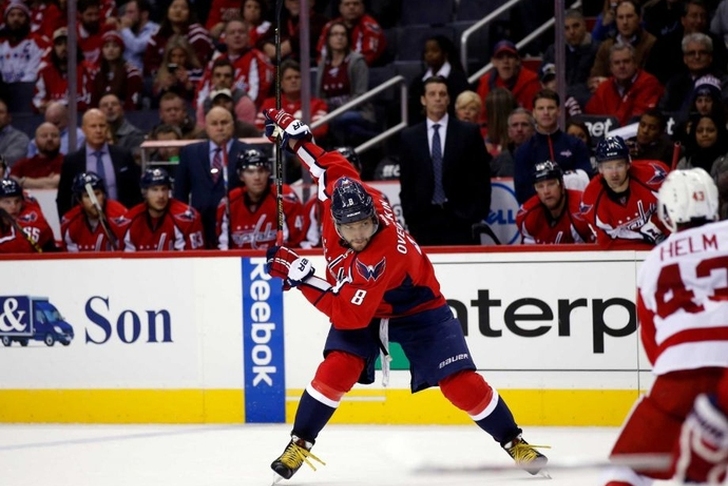 Another week, another Washington Capitals No. 1 ranking. The poles of the NHL standings have largely remained the same, but a few teams in between have mixed it up as they fight for the wild card spots at the halfway point of the season. The Red Wings, Coyotes, Flyers and Hurricanes have all made progress, while the Sharks, Predators and Ducks all took a hit. Below are the power rankings for the second full week of January and remember, as always, to sound off in the comments section.

1. Washington Capitals (32-7-3) - Last Week: 1
The Caps are winners of four straight and it's looking like it might be a while - if ever - until they come down from the top of these rankings. Oh, and Alexander Ovechkin became the fifth-fastest NHL player to 500 goals - nbd, right? Here's what just a few of the 115 netminders he's beaten have to say about this guy's knack for finding twine.

2. Dallas Stars (29-11-4) - Last Week: 2
Jamie Benn ended a four-game pointless streak with a power play goal on Sunday, but it wasn't enough to best the Wild. The Stars have lost four of their last five.

3. Los Angeles Kings (26-12-3) - Last Week: 3
The Kings lead the NHL in Corsi percentage, as they do a majority of possession-related stats. Add good goaltending a la Jonathan Quick and you've got a recipe for success.

4. Chicago Blackhawks (27-13-4) - Last Week: 5
Patrick Kane's league-leading 62 points have helped spur the 'Hawks to another fine season thus far. Seven players on Chicago's roster have registered 20-plus points. And that's not including Marian Hossa, whose 124 shots are the second-most on the team but have yileded just seven goals. We've become accustomed to this kind of depth from the 'Hawks for a number of years now.

6. St. Louis Blues (24-14-7) - Last Week: 6
The Blues' 55 points tie them with the Kings (though L.A. has four games in hand), but they have a goal differential of negative-one on the year. That's not the best of news. St. Louis also surrender the most defensive zone faceoffs in the NHL. This is as shaky a No. 6 as you can find, and Jake Allen's uncertain status isn't helping matters.

7. Minnesota Wild (22-12-8) - Last Week: 7
Leading scorer and captain Mikko Koivu returned this week from a scary fall into the boards. With the Wild struggling a little bit with possession (48.50 Corsi percentage) they need guys like him pushing the play. The Wild are 5-3-2 in their last 10.

8. Detroit Red Wings (22-13-7) - Last Week: 12
This is another potential playoff team with a negative goal differential, but Petr Mrazek hasn't lost in four games to start the new year off right and hasn't slipped below a .917 save percentage in that time frame. He's got a whopping .930 on the year.

The Isles have dropped three of the past four and Jaroslav Halak has turned in a couple of "meh" performances in his first few starts back from injury. Given how well Thomas Griess played in relief for the past few weeks, I wouldn't be surprised to see him share some of the workload moving forward.

Montreal is still in a bit of a tailspin without Carey Price, and the all-star goaltender won't be returning from injury until early February at the least.

13. New Jersey Devils (21-17-5) - Last Week: 11
Here's a fun fact: Cory Schneider leads the NHL in all-time career save percentage with a .926 in 248 games played. They'll need every bit of that talent to squeeze into the playoffs this year.

First it was Max Domi and Anthony Duclair, but now Tobias Rieder has eight points in his last six games. Young guys reign supreme in the desert and the 'Yotes are now winners of three-straight.

15. Tampa Bay Lightning (21-17-4) - Last Week: 16
They've won three of their most recent four, but missing a fully healthy Triplet Line has hurt the Bolts this year. Plain and simple - they need more out of Tyler Johnson, who has garned an underwhelming 12 points in 28 games.

16. Pittsburgh Penguins (20-16-5) - Last Week: 15
The Penguins' first half of the year was, by and large, a wreck. But the once-dead offense has been reanimated, and guys like Sidney Crosby and Patric Hornqvist are finally heating up - the latter has five points in his last five games.

17. Nashville Predators (19-16-7) - Last Week: 14
Swapping Ryan Johansen and Seth Jones was a mutually beneficial agreement for both the Predators (in need of top-six forward production) and the Blue Jackets (desperate for defense). Oh, and they ran into each other at the Columbus Airport! Anyway, here's my weekly plug that Pekka Rinne needs to be better.

The Sens are in trouble. They've won just three of their last 10 and dropped a few spots out of playoff contention in the packed Eastern Conference. They've also scored just seven goals in four games since the new year, punctuated by a 7-1 Caps manhandling on Sunday.

19. Colorado Avalanche (21-19-3) - Last Week: 21
The Avs are in a unique situation. They score the fifth most goals per game (2.91) but rank last in Corsi percentage (44.17). Something's got to give, and I just don't see Colorado continuing to climb in the rankings despite giving up the fifth-most goals in the league (2.86 against per game).

20. Philadelphia Flyers (18-15-7) - Last Week: 25
Sean Couturier has 12 points in his last 10 games and the Flyers are winners of three-straight. Don't count Broadstreet out just yet, especially if goaltending is consistent down the stretch.

21. Carolina Hurricanes (18-18-7) - Last Week: 26
After dropping their first three contests of 2016, the Canes took their frustrations out on the lowly Jackets twice in a row to improve to .500 in regulation. Jordan Staal is looking more like the guy Carolina thought they were acquiring in 2012; he has had multi-point nights in his last three contests.

22. Anaheim Ducks (17-7-7) - Last Week: 19
The Ducks' possession numbers are strong (third in Corsi percentage with 53.73), but it's John Gibson who's the driving force behind the surge in Anaheim.

23. Vancouver Canucks (16-16-10) - Last Week: 22
The Canucks face the unenviable task of facing the Panthers and Capitals in the next few days, and Henrik Sedin has just one point in his past five outings. He hasn't scored a goal since Dec. 7.

24. San Jose Sharks (19-18-2) - Last Week: 20
After dropping back-to-back contests at home, the Sharks throttled the Maple Leafs 7-0 Saturday. They have a chance for a bit of a streak with the Flames, Jets, and Oilers on the immediate docket.

25. Winnipeg Jets (19-20-3) - Last Week: 27
Facing former player Evander Kane wasn't enough to spark the Jets on Track Suit Night, and the Jets are still in the lurch after that horrid November.

26. Calgary Flames (19-19-2) - Last Week: 23
Despite some recent success, Johnny Gaudreau can't carry the team alone with his point-per-game pace. Sean Monahan and Mark Giordano have come on lately, and Kari Ramo has been okay between the pipes, but depth production has got to pick up in Calgary; only five players have 20-plus points this season. Let's not forget that Calgary's power play and penalty kill are the worst in the league, too.

27. Toronto Maple Leafs (16-17-7) - Last Week: 24
With the exception of the Sharks' 7-0 routing of the Leafs Saturday, Jonathan Bernier has been surprisingly dependable since his AHL stint. The Leafs are a largely average team playing underwhelming hockey, but solid goaltending would go a long way towards expediting this rebuild.

28. Buffalo Sabres (16-22-4) - Last Week: 28
The Sabres broke a six-game slide with a win over the struggling Jets. Unfortunately for them, they face the WIld, Bruins, and Capitals in the coming week.

29. Edmonton Oilers (17-23-3) - Last Week: 29
The Oilers scored on themselves three times in the third period to fall to the Lightning 3-2 on Saturday, which might be the most Oiler-y thing we've seen this year. Oh, and Connor McDavid won't be back until February.

30. Columbus Blue Jackets (15-24-4) - Last Week: 30
I've grown tired of explaining the sad state of affairs in Columbus, so this week I'm just going to leave this video of this puppy learning to climb stairs here.