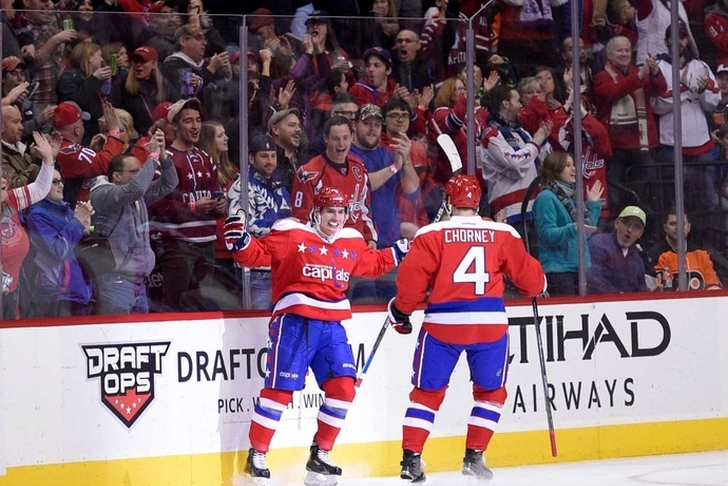 The NHL returned from the All-Star break this week to start the unofficial second half of the season. With it comes controversy, criticism, and more than a few teams attempting to climb the standings and snag a playoff lifeline. The Washington Capitals remained on top, while the Ducks and Flyers made the biggest upwards moves. The Wild and Red Wings, however, took tumbles down the list. Below are your Chat Sports power rankings for the week of Feb. 8. Don't forget to make your voice heard in the comments section.

1. Washington Capitals (38-9-4) - Last Week: 1
Alex Ovechkin reached 30 goals on the year and Braden Holtby continued his dominance this weekend when he earned his league-leading 32nd win. He has lost just one game in regulation during his last 29 starts.

2. Chicago Blackhawks (36-16-4) - Last Week: 2
Stan Bowman is looking like he's once again cheated salary cap death with Artem Anisimov, who has filled the Top 6 void left by Brandon Saad for a few million dollars less. Of course, his linemates are putting up some solid numbers.

3. Dallas Stars (33-15-5) - Last Week: 3
They might have suffered a 5-1 loss at the hands of the 'Hawks Saturday, but the league's second-best offense still boasts four players with 40-plus points. Jamie Benn and Tyler Seguin are ranked second and third, respectively, in scoring.

4. Florida Panthers (31-15-6) - Last Week: 5
The Cats continue to defy the advanced statistics gods (25th in CF% with a 47.26) and sit perched atop the Atlantic Division with 68 points. Roberto Luongo's victory over the Red Wings on Thursday hoisted him to 7th on the all-time NHL wins list.

5. Los Angeles Kings (31-17-3) - Last Week: 4
The Kings' league-leading 56.14 Corsi-for percentage denotes them as fancy stats royalty and that's been a big part of their success this season. When you control the puck, you dictate the way games are played.

6. St. Louis Blues (30-17-8) - Last Week: 6
Could the Winter Classic be coming to St. Louis in 2017? According to the St. Louis Post-Dispatch, it's likely the Blues will host the Blackhawks, because why wouldn't the highly-lucrative Chicago squad be involved in another outdoor game? Also, props to the NHL for suggesting the contest be played on the second of the month.

7. Tampa Bay Lightning (29-18-4) - Last Week: 7
The Bolts have won nine of their last 10 and it's safe to say they're officially back. Nikita Kucherov, Vladislav Namestnikov and Steven Stamkos combined for 33 points in January.

8. New York Rangers (29-18-5) - Last Week: 8
The Rangers find themselves at a sort of crossroads as February gets underway. Their blueline is struggling and they've got several players that just can't be moved (Dan's Boyle and Girardi) but they could use some trade deadline dealings to strengthen their playoff chances. They've stayed afloat marvelously and have posted six wins in their last 10 games, but for a team that struggles to possess the puck with the lead and close out games - they sport an abysmal 43.38 Corsi-for percentage when ahead - it could be tough to make a run with their current squad.

9. Boston Bruins (28-18-6) - Last Week: 11
The B's will host a homecoming for Milan Lucic when the Kings head to town, then embark on a six-game road trip. As they have for much of the season, expect both top five special teams units to carry the day for Boston.

10. New York Islanders (27-18-6) - Last Week: 10
A 8-1 shellacking of the Oilers was a good moral victory for the Islanders on Sunday and nearly doubled their goal differential in the process. The team's penalty killing unit is the second most effective such squad percentage-wise in the league (86.8) but they've struggled on the man advantage; the Isles convered just 15.6 percent of their power plays in January.

11. Pittsburgh Penguins (26-18-7) - Last Week: 13
Sidney Crosby became the 10th fastest player to 900 points in NHL history this weekend and he's got 18 points in his last 10 outings. Where are all of those bloggers that were mourning the end of his career in November now? [Crickets].

12. Detroit Red Wings (26-18-8) - Last Week: 9
The Red Wings have put up a mediocre 12-10-5 record at Joe Louis Arena this season, but they have a chance to bolster those figures with four-straight home games on the upcoming docket against some quality competition. They draw the Panthers first.

13. San Jose Sharks (27-20-4) - Last Week: 12
Another team that has struggled at home, the Sharks are a tough bunch to peg down. They dropped a 6-2 decision in Nashville this past weekend but are 6-2-2 in their last 10. They've converted well on the power play recently - the Sharks' goals both came on the man-advantage versus the Predators and are successful 22.1 percent of the time this year - but defensive play has been spotty, especially when it comes to the guy between the pipes.

14. New Jersey Devils (26-20-7) - Last Week: 15
All-time goaltending great Martin Brodeur was honored this weekend in New Jersey with a statue and a ceremony retiring his jersey. The team in red and black now looks a little different than when he was playing, but they're still vying for a playoff spot. The Devils are currently tied with the Penguins for the final wild card spot with 59 points, but sit two games back.

15. Anaheim Ducks (25-18-7) - Last Week: 20
The Ducks are finally finding their rhythm. A knack for puck possession and the league's best penalty kill have gone a long way towards making this team a playoff contender, as has the stellar play of goaltender John Gibson.

16. Nashville Predators (25-20-8) - Last Week: 16
I hate to sound optimistic considering how poorly he's played this season, but Pekka Rinne has had a save percentage of at least .933 in five of his last six outings. If the Pred's netminder has indeed turned a corner, that would be the final piece of the Nashville playoff puzzle.

17. Colorado Avalanche (27-24-4) - Last Week: 17
Though they've gone 0-2-1 in their last three contests, the Avs are playing great hockey right now. They have the narrowest of leads as they hold on to the final wild card spot out West. Matt Duchene and Nathan MacKinnon lead the team with 43 points apiece.

18. Philadelphia Flyers (23-19-9) - Last Week: 21
Wayne Simmonds avoided a suspension for his sucker punch on New York's Ryan McDonagh, which is big for the Flyers; he's been their wrecking ball this year, recording 34 points and 110 penalty minutes so far.

19. Carolina Hurricanes (24-21-9) - Last Week: 18
Though a shootout loss to the Canadiens is a blemish these days, Carolina has proven its mettle in the last few months. The 'Canes have finally found some consistency in Eddie Lack, who has recorded two shutouts in his previous five appearances.

20. Minnesota Wild (23-20-9) - Last Week: 14
The Wild are in a tailspin and their chances of survival are not looking good. A tough Central Division schedule matched with bad play in all three zones is not a good sign of things to come.

21: Arizona Coyotes (24-22-6) - Last Week: 19
Having a guy like Shane Doan on the roster is exactly what you need as a team facing late-season adversity. Don't count the Coyotes out just yet.

22. Montreal Canadiens (26-24-4) - Last Week: 22
When will it end for the Habs? A shootout win on Sunday helped to stop Montreal's bleeding, but it needs some serious surgery if the playoffs are in the cards. Carey Price's status is still in limbo, as is the probability of a Canadian team making the playoffs. The Habs are Canada's best bet; if they fail to find their footing by regular season's end, and no other Canadian team is able to surge into a wild card spot, it would be the first time that an organization from up North missed the playoffs since Montreal and Toronto failed to do so in 1969-70.

24. Vancouver Canucks (20-20-12) - Last Week: 24
The Canucks would likely need to win two thirds of their final games to earn a postseason berth, but they haven't won more than two in a row all year. I don't like these odds.

25. Calgary Flames (23-25-3) - Last Week: 26
Jiri Hudler has six points in his last six contests. Though the Flames won just two games in that span, they only lost one of those by more than one goal. They need him, and a host of depth players, to get going in Calgary if they want a chance at the playoffs. The window is rapidly closing.

27. Toronto Maple Leafs (19-23-9) - Last Week: 27
The new Maple Leafs logo is not botanically correct! Apparently, it's a hybrid of the leaf found in sugar, silver, and red maple trees. Yes, I know the 13 veins represent the 13 Stanley Cup wins. But I just find it so Toronto-y to mess up (on a technical level, at least) your own namesake.

28. Buffalo Sabres (21-26-6) - Last Week: 28
Robin Lehner has been stellar in his return from injury, posting four games in a row with at least a .943 save percentage. Unfortunately, the rest of his team has not been up to snuff.