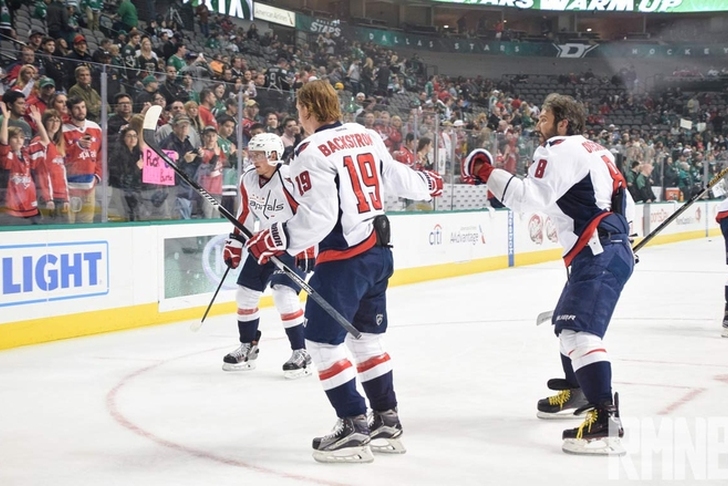 We're just a week away from the NHL trade deadline and teams are taking notice. While the wheeling and dealing has begun to heat up, so too have several teams such as the Ducks, Wild, and Senators, while squads like the Kings and Red Wings have dropped a few spots. The Washington Capitals still have a commanding lead in this week's power rankings, but the playoff race is tighter than ever. Below are your Chat Sports power rankings for the week of Feb. 22.

1. Washington Capitals (43-10-4) - Last Week: 1
It's no stretch to say it surprised the hockey community that Brooks Orpik's two-point effort Saturday against the Devils included the winning goal. But judging by that late celly, I'd say it surprised Orpik, too. In 798 career NHL contests, this was his first with game-deciding implications. Even when the Capitals aren't at their best, the likely President's Trophy winners find a way to win.

2. Dallas Stars (37-17-6) - Last Week: 2
The Stars have dropped three-straight outings and surrendered 13 combined goals versus the Coyotes and Bruins. Sloppy play and a temporary lack of focus has plagued one of the best in the West, but an upcoming home-and-home with Central Division basement dwelling Winnipeg should give Dallas a chance to find its rhythm.

3. Chicago Blackhawks (38-19-5) - Last Week: 3
A two-game win streak was emphatically ended by the Wild in Sunday's Stadium Series game. Patrick Kane scored the lone Blackhawk tally, his 35th of the year. Kane's 84 points is tops in the league by a margin of 17.

4. St. Louis Blues (35-17-9) - Last Week: 5
There isn't a hotter player in the league than Brian Elliott right now. With netminding partner Jake Allen still recovering from a lower-body injury, "Moose" has shined, and now owns the best save percentage and goals-against average marks in the league, with a .931 and a 2.06, respectively. He's won his last five starts and submitted his entry for save of the year on Thursday in overtime, no less.

5. New York Rangers (34-19-6) - Last Week: 6
The trade deadline is a week away, and with one roster spot and $1.5 million in cap space available, the Rangers look like they could once again be a receiving-end candidate as they they'll attempt to bolster the blue line or add to their bottom-six forwards. New York is 7-1-1 in its last nine contests, and looks to be cruising in the absence of Rick Nash, who has missed the last 12 games with a bone bruise.

6. Florida Panthers (34-18-7) - Last Week: 7
Sometimes hockey-ing is hard, right Vincent? It seemed like the fancy stat and injury bugs might finally be catching up the to Cats when they allowed 14 goals in three games last week, but they've managed to win two of their last three while surrendering just four goals in that span. And Roberto Luongo continues to showcase those old man skills, sporting a .925 save percentage this year.

7. Los Angeles Kings (34-20-4) - Last Week: 4
Three losses in a row plagued the Kings of the coast before they snagged an overtime win in Nashville. For a division that looked mighty dreadful in the first half of the season, the top three teams are now virtually deadlocked in a race for the top spot. L.A. maintains a two-point edge over the surging Ducks, but nothing is a guarantee out West anymore.

8. New York Islanders (31-19-7) - Last Week: 8
It's been an up-and-down couple of weeks for the Isles, but Jarolslav Halak blanked the Devils in a 1-0 outing on Friday for his third shutout of the year. That performance throws an even bigger wrench into the near-nightly question of "which goalie does New York start?" It's a good problem to have. And though Halak has been the weaker of the two between he and Thomas Greiss for the last month or two, both are deserving of No. 1 minutes moving forward.

9. Anaheim Ducks (31-19-8) - Last Week: 15
This is the Anaheim we've been waiting for. The Ducks have claimed five-straight victories and are making a push for the top spot in the Pacific. Ryan Kessler finally seems to be meeting expectations and guys like Hampus Lindholm, who has four points in his last five games, have done a tremendous job stepping up offensively from the blueline. Also, holy Corsi. The Ducks now have the third-best possession numbers on the year (53.2 CF%) and trail only the Kings and Stars in that department.

10. Tampa Bay Lightning (33-22-4) - Last Week: 10
General Manager Steve Yzerman made it clear last week that he won't be dealing Steven Stamkos, so for the love of all that's good in the world, let's stop the speculation. True, the Lightning are gambling on a strong finish by not trading the 25-year old star. But three wins in a row and a slew of underacheiving franchises on the upcoming docket makes it look like the odds might be shifting in Tampa Bay's favor.

11. Boston Bruins (32-21-6) - Last Week: 11
Like Tampa Bay or New York, Boston is one of these teams that will likely be looking for a rental acquisition before Feb. 29. The black and yellow have been shaky playoff bets since the holidays but have looked rather strong this month with the exception of a blowout loss to the Kings a few weeks ago. After two years of frustrating mediocrity, Loui Eriksson has finally erupted this season for 46 points so far, a mere four points shy of Patrice Bergeron's team-best 50. Eriksson has four goals in his past five games.

12. San Jose Sharks (31-21-5) - Last Week: 12
The Sharks should feast on their upcoming opponents (the Avalanche, Sabres, Flames, Canadiens, Canucks thrice) but they have to get by the Blues first. Joe Thornton's supposed decline has been all but forgotten thanks to his 51-point effort so far this season (What is it with these old guys?). On the goaltending front, it seems Martin Jones has upped his game recently, and boasts a 4-1 record over his last five contests with a .944 save percentage and one shutout in that span, a decided improvement over his .916 season-long mark.

13. Pittsburgh Penguins (30-20-8) - Last Week: 13
Pittsburgh's February schedule has been a bit daunting, as all but one of their opponents claim winning records in regulation. They've managed a 6-3-1 line in that time. Phil Kessel has four goals in his last five games and seems to be getting comfortable on Sidney Crosby's line. Like the Ducks, this is a reasonably good team that has had to overcome a slow start to the season, but the Pens rank fifth in Corsi-for percentage so far this month at 53.1. That's where you want to be heading into March.

14. Detroit Red Wings (29-20-11) - Last Week: 9
The Wings have dropped all five of their away games this month, three of which were by margins of three goals. It doesn't get any easier, as two of Detroit's next three roadtrips are to Dallas and Chicago.

15. Nashville Predators (27-21-11) - Last Week: 16
Pekka Rinne got a shutout this weekend! To mark the occasion, here's a clip of a bunch of Predators dancing with Danny Glover.

16. New Jersey Devils (29-24-7) - Last Week: 14
The Devils are the first team on the outside looking in when it comes to the Eastern Conference playoff picture. They've dropped three-straight contests and are currently in Corsi hell. And no, I will not apologize for that bad joke.

17. Minnesota Wild (27-22-10) - Last Week: 22
A 1-11-2 skid resulted in Mike Yeo getting the boot. Interim head coach John Torchetti made his way through Western Canada to start 3-0, but it was his squad's emphatic, 6-1 bulldozing of the rival Blackhawks in the Stadium series that really grabbed everyone's attention. The Wild are back, and sit just one point out of playoff contention. The next few weeks should be a treat to watch.

18. Colorado Avalanche (31-27-4) - Last Week: 19
The Avs are somehow still in it despite seemingly never possessing the puck (a league-worst 43.50 CF% is approaching unbelievable territory), so they aren't willing to deal major pieces for a rental player. Enter Shawn Matthias, who should add some back-end muscle to a shallow Colorado forward corps.

19. Carolina Hurricanes (27-23-10) - Last Week: 17
The 'Canes, though fifth in Corsi-for percentage with a 53.13 mark on the year, have struggled with consistency everywhere outside of possession. Goaltending and the power play need to settle down and put up better numbers if Carolina wants to see postseason action for the first time since 2009.

20. Philadelphia Flyers (26-21-11) - Last Week: 18
What can't Shayne Gosterberg Ghestosberhe Gostisbehere do? Every one of his 12 goals this season has either tied the game or given the Flyers the lead, and opposing coaches have taken notice. Oh, and here's to hoping he just goes by "The Ghost" from here on out; that last name is too German even for me to decipher.

21. Ottawa Senators (28-26-6) - Last Week: 25
Though his name sounds more generic than a sitcom love interest, Craig Anderson has been anything but ordinary recently. He's almost single-handedly kept the ailing Senators afloat, which is no small task given their recent plummeting through the rankings.

22. Montreal Canadiens (28-27-4) - Last Week: 20
It's now or never for Montreal. The Habs pulled out a "W" against the Flyers after dropping contests to the Avalanche, Coyotes, and Sabres. They don't make a late-season surge without someone in their goaltending stable stepping up, and unfortunately for the Canadiens, I don't see that happening.

23. Arizona Coyotes (27-25-6) - Last Week: 21
The 'Yotes' offense has exploded for 21 goals in its past five contests. They'll need to string a few wins together moving forward if they want to make up ground, as they sit five points out of the final wild card spot.

24. Vancouver Canucks (23-24-12) - Last Week: 23
The Canucks followed four-straight 5-2 losses in a row with a 5-1 dismantling of the Avalanche. That win is encouraging, but the damage has likely already been dealt. Don't expect Vancouver to make up the seven points that stand in its way.

25. Calgary Flames (26-29-3) - Last Week: 24
There's a common theme that strings together lots of teams in the low 20's in these columns: goaltending. As you can probably guess, it's not of the good variety, either. Jonas Hiller's horrid play has reached a critical low, and his .886 season save percentage will not go unpunished by the Calgary higher-ups.

27. Buffalo Sabres (24-29-7) - Last Week: 28
Robin Lehner earned the third shutout of his career in Columbus, though he also collected four penalty minutes and nearly got into it with Jack Johnson after several questionable hits were issued by the Blue Jackets. Despite the fuss on Friday, Lehner has quietly put together a nice little month after returning from an ankle injury that sidelined him for the first half of the season. He's 4-5-2 on the year with very little defense in front of him, and has maintained a .928 save percentage.

28. Columbus Blue Jackets (23-29-7) - Last Week: 29
After putting up four goals on both the Ducks and Senators in a pair of wins, the Jackets have just one goal total to show in their efforts against the Bruins and Sabres. It's been another disappointing and perplexing year in Columbus.

29. Toronto Maple Leafs (20-27-10) - Last Week: 27
Sell, baby, sell! The Leafs have a week left to get returns on several players who will become unrestricted free agents this summer. There's plenty of talent rising through the Marlies and Sweet Lou has to navigate the waters carefully as he attempts to (continue to) rebuild the team.

30. Edmonton Oilers (22-32-6) - Last Week: 30
I don't think I've ever watched a defensive corps more depressing than the the Oilers have rostered over the past few seasons. Peter Chiarelli (and by extension, Daryl Katz) has perfected the art of keeping his fan base hopeful while never really making the team into a contender.