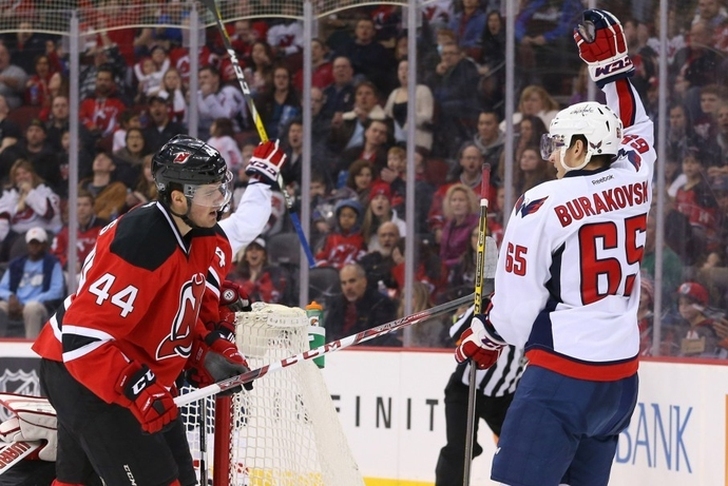 Happy late-Valentine's Day from Chat Sports! While you were busy spending time with your significant other - or celebrating the single life - I was busy shunning mine in favor of hockey research. I know, I'm such a romantic.

Below are the results from my labor of love this weekend, your power rankings for the week of Feb. 15. The Capitals once again retain the top spot (surprise!), while the Red Wings, Rangers, and Islanders made moves up the ladder. The Panthers and Lightning got the short end of the stick this week, dropping three spots each. Read on below to find out what's going on with each team this week, and remember to make your voice heard in the comments section.

1. Washington Capitals (40-10-4) - Last Week: 1
This year's Capitals are the fastest to reach 40 wins in NHL history and they aren't slowing down. But what will they do with Brooks Orpik returning? And will they look for an insurance piece to solidify their blueline before the trade deadline? Does it even matter with the way Braden Holtby is playing?

2. Dallas Stars (36-15-5) - Last Week: 3
The Stars are 5-1-0 since returning from the All-Star break, with wins over the Capitals and Blackhawks in their last two contests. Welcome back to the top spot in the West, Dallas.

3. Chicago Blackhawks (36-18-5) - Last Week: 2
After starting February off with three-straight wins, the Hawks are reeling after three-straight losses, the last of which was an overtime heartbreaker to Anaheim. And though he's no longer the league leader in goals or assists, Patrick Kane does still have a commanding point lead with 78. That's 15 more than runners up Jamie Benn and Erik Karlsson.

4. Los Angeles Kings (33-19-3) - Last Week: 5
The NHL's best possession team is in a bit of a rut. The Kings have tasted victory in just four of their last 10 contests and they've alternated wins and losses since Jan. 19.

5. St. Louis Blues (32-17-9) - Last Week: 6
St. Louis is 4-1-1 since the All-Star break, and the good times should continue to roll now that Jaden Schwartz is back in the lineup. He returned in fantastic fashion this past week, scoring a goal and adding an assist in his first game since he fractured his ankle on Oct. 23.

6. New York Rangers (32-18-6) - Last Week: 8
The roller coaster of a season continues. The Rangers have secured a 4-0-1 record in their last five outings and, somehow, the defense isn't looking atrocious. In those four wins, the Blueshirts have allowed just 6 goals.

7. Florida Panthers (32-18-6) - Last Week: 4
Despite lackluster possession numbers (47.31 CF%) the Panthers have continued to light the lamp at a respectable pace. The Cats boast six shooters with at least 34 points on the year, though a member of those ranks, Aleksander Barkov, is sidelined with a concussion for the foreseeable future and has been placed on injured reserve.

8. New York Islanders (29-19-6) - Last Week: 10
The Islanders have struggled against potential playoff opponents all year, but they'll have a chance to gather momentum against Eastern conference foes with the Red Wings, Capitals, and Devils on deck.

9. Detroit Red Wings (29-18-9) - Last Week: 12
Detroit exploded for a season-high six goals in a high-octane win over Boston on Sunday. Pavel Datsyuk and Henrik Zetterberg combined for six points as they helped their team claim sole possession of second place in the Atlantic, and the former hit the 900-point milestone. Their fourth win in five games was a nice change of pace for an offense that's used to having Petr Mrazek bail them out; heading into this past weekend, the Red Wings goaltender held a .951 save percentage and 1.31 goals-against average in his previous 13 games. Even with Sunday's hiccup, there isn't a hotter goaltender in the NHL right now.

10. Tampa Bay Lightning (30-21-4) - Last Week: 7
The Bolts have dropped three of their last four, including stinkers to the Canadiens and Senators last week. Speaking of Ottawa and Montreal, those are the two cities that have been grabbing headlines as possible takers in a Jonathan Drouin trade. Steve Yzerman has been waiting for the right price in return, but Drouin's holdout combined with his lackluster AHL play - just three points in seven games with Syracuse - has likely been a growing deterrent for interested parties.

11. Boston Bruins (30-20-6) - Last Week: 9
The most consistent special teams units in the NHL have been anything but recently. The Bruins have converted just three of their last 43 power play chances, while their shorthanded squad has surrendered nine goals in their 37 most recent kills. If you're a Boston fan, I recommend refraining from working those numbers out to percentages.

12. San Jose Sharks (29-20-5) - Last Week: 13
Since the All-Star break, the Sharks have beaten the Blues and the Blackhawks, but dropped games to the Predators and Flames. That's the kind of inconsistency that has plagued this squad all year, but they haven't lost back-to-back games since their first two outings in January and Martin Jones has been much more consistent in his last few starts (.927 SV% over his last 5 GP). San Jose has a one-point hold on the second spot in the Pacific Division.

13. Pittsburgh Penguins (28-19-7) - Last Week: 11
Will the Penguins try to bolster their blueline with a veteran presence like Vancouver's Dan Hamhuis? It's possible, but with the acquisition of Trevor Daley earlier this season, the defensive corps has seemed to stabilize in Pittsburgh. Still, given Jim Rutherford's history of deadline dealings, it woundn't come as a surprise to see some changes on the roster down the stretch.

14. New Jersey Devils (29-21-7) - Last Week: 14
Cory Schneider posted hi-- wait, that was Keith Kinkaid in net? The 26-year old backup posted his first career shutout in a 1-0 blanking of the Kings Sunday, and looked extremely confident while doing so during the 28-save effort. The Devils moved into a third place in the Metropolitan Division with a fragile, one-point lead over the Islanders, though Isles have three games in hand. Still, this has been New Jersey's MO all year: a team of underdogs playing defensive-minded hockey and finding ways to win despite the numbers suggesting they shouldn't be anywhere near the playoffs.

15. Anaheim Ducks (27-19-8) - Last Week: 15
The Ducks are 8-1-1 in their last 10 games and are making serious moves up the ladder. Ryan Getzlaf scored his seventh (just his seventh!) goal of the year in Saturday's 3-2 overtime win in Chicago. Don't look now, but we've got a race in the Pacific Division.

16. Nashville Predators (26-21-9) - Last Week: 16
Here's your weekly "Pekka Rinne has been awful this year" reminder. Maybe it's time to bring in someone to challenge the struggling netminder.

17. Carolina Hurricanes (25-21-10) - Last Week: 19
The Hurricanes just won't die down. Their NHL fourth-best Corsi-for percentage (53.36) has buoyed the lackluster play of goaltenders Cam Ward and Eddie Lack, but they'll need one of those two to steal a couple of games if they want to slide into a wild card spot out East. Carolina sits just four points out of a postseason berth.

18. Philadelphia Flyers (24-21-10) - Last Week: 18
Just when it looked like the Flyers might trend upward and make a push for the postseason, they've dropped five of their last six games. Excepting the 5-1 win over the Sabres on Feb. 11, the offense has failed to post more than two goals since the second contest into this month. Steve Mason has held up his end of the bargain. Now the static offense needs to respond.

19. Colorado Avalanche (29-26-4) - Last Week: 17
A rough return from the All-Star break has thrown a playoff appearance into jeopardy for the Avs, but they've stabilized somewhat over the last six days with a 2-1-0 record. Along with Chicago, Colorado's 59 games played is the most in the West, so wins are at an even higher premium moving forward. Upcoming dates with the Canadiens, Oilers, and Canucks could help to separate the the mile-high gang from other potential contenders.

20. Montreal Canadiens (27-25-4) - Last Week: 22
Speaking of the Habs and playoff contention, it's not looking good. Three-straight wins and a revigorated offense was railroaded Friday by a poor defensive performance in Buffalo. Montreal brass can talk an eventual return to action all it wants, but it's time to face facts; Even if Carey Price dresses again this season - and I wouldn't bet on it - it's too little, too late for le Club de hockey Canadien.

21. Arizona Coyotes (25-24-6) - Last Week: 21
With just seven wins under its belt in 2016, the Coyotes face a critical decision: do they sell and hope to build for next season, or stick it out and attempt a Cinderella playoff run? The former scenario seems likely as the young team out of Phoenix has a bright future, and selling off a middle-aged player a la Mikkel Boedker or Martin Hanzal to a Cup contender would make sense as younger players on the Coyotes roster progress. Their Corsi numbers have not been kind to them this year, and the smart move would be to hit the reset button and gear up for a run next year.

22. MInnesota Wild (23-22-10) - Last Week: 20
The Wild haven't won a game since Jan. 23, and you'd have to travel all the way back to Jan. 9 to find a win before that. Head coach Mike Yeo was given the axe over the weekend. Should we have seen this coming? It seems Devan Dubnyk masked some glaring issues on this squad with his stellar play throughout 2015, but his slide into mediocrity this calendar year coincided with his team's tumble out of the playoff picture. Minnesota has managed just 12 points in the standings over its last 20 games.

23. Vancouver Canucks (22-21-12) - Last Week: 24
The only good positive that came out of the weekend for the Canucks was the style they sported Saturday. Their play did not match those rockin' throwback unis, however, and now the 'Nucks are trapped between a playoff berth and a lottery draw.

24. Calagary Flames (25-26-3) - Last Week: 25
To move Kris Russell or to not move Kris Russell; that is the question. Last year's playoff darlings are all but eliminated from contention this year, which means a trade deadline sale could be in the works. Calgary's top six forwards leave little to be desired, but the rest of the roster is fair game for a makeover, especially the goaltending position - which makes Jon Gillies' recovery even more important.

26. Winnipeg Jets (25-27-3) - Last Week: 26
The Jets quited some major trade talk with the resigning of Dustin Byfuglien, but that leaves negotiations with captain Andrew Ladd up in the air. Expect to hear potential avenues by which to move him in the coming days.

27. Toronto Maple Leafs (20-25-9) - Last Week: 27
Toronto has won but three of of its last 10 outings. At least the Leafs opened up some cap space with the Dion Phaneuf trade. Now we'll see what the Leafs decide to do with it in the months ahead.

28. Buffalo Sabres (23-28-6) - Last Week: 28
Robin Lehner rebounded nicely in a 34-save effort on Sunday. A few more entries like this and the 24-year old will have a convincing claim to primary netminding duties as Buffalo continues its rebuild.

29. Columbus Blue Jackets (23-28-6) - Last Week: 29
It looks like the Jackets' tendency to make late-season surges after they've been eliminated from playoff contention will continue this year. A big reason for that push is Joonas Korpisalo, who has been spectacular in the crease as of late. Seth Jones has also produced as advertised.

30. Edmonton Oilers (22-29-6) - Last Week: 30
The hockey community joked about Connor McJesus turning water to wine in the preseason, but now we've got definitive proof that he's got the Midas touch. Next thing you know, he'll use his magic powers to Houdini the Oilers into another No. 1 draft pick.