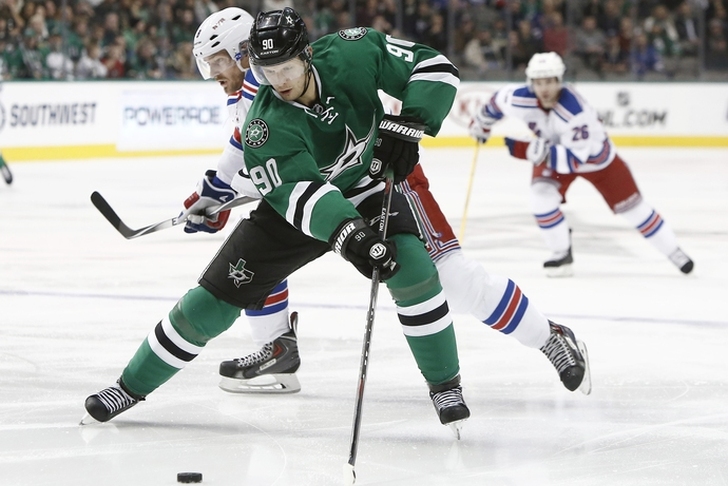 It finally happened - the Dallas Stars sit atop the rankings, and they continue to extend their point lead in the West. Teams Detroit and Los Angeles have been hot as of late, while the Rangers and Canadiens' struggles have tightened the race out East. December has kicked into full gear and the NHL standings have seen their most recent shake-up, so be sure to sound off in the comments with your own take on what's going on in hockey's premier league.

The Stars have earned it. The hottest offense in hockey shows no signs of slowing down, and despite close losses to the Oilers and Flames in two of their previous three contests they're still enjoying a franchise-best start. For a team that was playing a lot of catch-up last season and eventually missed the playoffs, it's got to feel good to be on top at the moment.

The Canadiens have dropped two straight in Carey Price's absence and the road gets no easier moving forward - their next six games will be against teams in the top half of the NHL standings. Backup netminder Mike Condon continues to give his team a chance, so this unusual situation shouldn't be all that bad for the Habs.

And speaking of unusual situations, it appears former Montreal enforcer Georges Laracque has traded the hockey jersey for Victorian-era garb; the one-time hockey enforcer will be starring in a local stage production of A Christmas Carol. I know this has no bearing on the Canadiens' rankings, but these are the kind of things that need to be shared.

Though the Rangers actually have one more point in the standings than the Caps, our nation's capital has three games in hand. Washington has lost just once in regulation since November third and has won seven of its last nine games. Evgeny Kuznetsov hasn't registered a point in his last three games, but still leads the team in scoring with 26 points in 25 games. And of course, Braden Holtby has been nothing short of spectacular. He has a sterling .928 save perecentage to go along with a 16-4-1 record.

It's been a struggle for the Blueshirts lately. They had dropped five of their last six heading into Sunday's win over the Senators, so it remains to be seen if the slump really is over. It looks like Henrik Lundqvist is back to form, though, as he's posted back-to-back games in which he's allowed just one goal. The Rangers boast an NHL-best goals-allowed-per-game mark, which is resting at an even two right now.

Vladimir Tarasenko is proving last year was no fluke with his point-per-game production pace and Jake Allen has solidfied himself as the No. 1 netminder in town. The league's second-best penalty kill has also been a big contributor, though the Blues are just 4-3-3 in their last 10 contests.

The Kings might be playing the best hockey of anyone recently. They've been victorious in four of their last five contests and Jeff Carter is on a five-game point streak. Jonathan Quick has also elevated his play, and L.A. looks to be firing on all cylanders right now.

This section of the rankings is where the water starts to muddy. So many teams are stacked up on each other points-wise, but the Wild's recent defensive domination gives them the edge. They've only allowed one goal in their three-game win streak, and Darcy Kuemper has been credited with back-to-back shutouts in Devan Dubnyk's absence. Backup goalie shutouts are never a bad thing.

Eight of the Wings' last 10 games have gone into overtime, and they've turned in a 7-0-3 record in that span. Detroit is finding ways to get it done, plain and simple.

The best power play in hockey has been propelling the B's up the standings. They've scored the fourth-most goals of any team and have been doing a much better job of keeping pucks out of their own net recently. In Tuukka Rask's 11 most recent starts, he's failed to stop 90 percent of the shots he's faced just twice.

The Sens have dropped three of the last five. Their power play continues to be a bright spot (21 percent conversion rate, good for eighth in the league), but penalty killing has been a weakness for this squad. Craig Anderson has been dependable in net for the most part.

The Isles have looked pretty impressive as of late, with wins in five of their last seven contests. They've looked especially good at the Barclays Center, where the Islanders have won their last four, with a pair of 2-1 wins over the Rangers and Blues to boot.

Patrick Kane continues to do Patrick Kane things and broke Bobby Hull's record for consecutive games with at least one point. He sits at 22, and though he probably won't come close to Wayne Gretzky's record of 51, that's still a heck of a feat. He's on pace for an astounding 128 points this year.

Nashville has lost seven of its last nine. Pekka Rinne's save percentage in that span is .867. I assume you can do math and understand that this is not very good.

The gap has widened in the Pacific Division after the Sharks dropped their last three decisions. Back-to-back contests against the worst two teams in the West should be just what the doctor ordered.

Mike Cammalleri has seven points in his past three contests and the New Jersey is finding ways to stick around in the playoff hunt. You'll likely continue to hear the name Cory Schneider being dropped on a regular basis as the main reason why. Even though the Devils average just 2.48 goals per game, they allow an average of just 2.37.

The Steel City has but one win in their previous five games and suffered losses to Columbus, Edmonton, and Anaheim in that time. At least Sidney Crosby has found his stride; the captain has points in seven of his last eight contests.

Saturday's lacking performance against the Devils snapped a four-game win streak during which Roberto Luongo hadn't surrendered more than two goals in a game. The active NHL wins leader should rebound on a tough, three-game road trip up the Eastern seaboard.

The Jets have won three of their last five games and seem to be trending in the right direction, but goaltending is still a huge question mark for this group; they allow an average of three goals per game, the third-worst mark in the NHL.

In a tough last few weeks, the Bolts have managed to win five of their last eight against some of the best competition in the NHL. Steven Stamkos has three points in his last six games, and still struggles to find the back of the net even though he has six power play goals on the year, fifth best in the NHL.

The Yotes have now dropped four-straight, including a couple of heart-breakers to Buffalo and Carolina. Mike Smith has allowed three or more goals in his past three starts, all losses. He and Anthony Duclair (one assist in his last six games) need to find their rhythms again if this team is going to seriously contend for a playoff spot.

The Flyers have a very respectable 5-3-2 mark in their last 10 games. Despite averaging 1.96 goals per game (second-worst in the NHL) they're still managing to beat the Islanders, Predators, Rangers and Senators before losing their most recent contest to the Blue Jackets. It's the awakening of players like Wayne Simmonds that has helped the Flyers find a bit of footing in the standings - after a six-game point drought, the winger has registered points in three of his last four appearances.

Slowly but surely, the Ducks are climbing out of the early hole that they found themselves digging the first few weeks of play. John Gibson has been incredible in net since he was called up to carry the load Nov. 24. In his eight starts, he's never dipped below a .900 save percentage and has registered shutouts in two of his last four games.

We didn't get the McDavid-Eichel showdown we were looking for this weekend, but Buffalo doesn't mind - its second overall draft prick from this summer is averaging a little better than a point every two games and looks as if he'll only be getting better from there. Goaltender Robin Lehner is no longer in a walking boot, but has still yet to show he's ready to get back in net. One would think his presence would certainly help a struggling Buffalo blue line.

The Canucks have lost a league-leading eight times this year when the game is forced into overtime or a shootout. They've dropped five straight and can't seem to find much consistency in either end of the ice.

The Canes have now won two-straight games over the Canadiens and the Coyotes. The boys from Raleigh seem to play well against good competition this year, but haven't won nearly enough to be a serious threat. They rank in the bottom-five in terms of points for and against per game.

It's a crowded basement this year, but the Oilers have done enough to make the case that they're not the worst team in the NHL. They've won four of their last five games, including a pair of wins over the Stars and Bruins. All of this has been done without Connor McDavid. Despite the winning, it's very possible that major pieces of this offensive tapestry will be dismantled and moved sooner rather than later, so keep on eye on the trade rumor mill.

The Leafs recently crushed the St. Louis Blues and looked fine in a shutout performance over the Oilers last week, but that's about where the good news ends in Toronto.

Peter Forsberg has full confidence in the Avs making the playoffs this year. I can't say I agree with him.

Even the world's angriest dog lover John Tortorella can't get the Blue Jackets to play competitive puck. For a roster full of former All Stars, Vezina Trophy winners, and up-and-coming young talent, it's a bit of a head scratcher as to why Columbus has been so awful this year.

Even with wins over the Stars and Bruins in their last two games, the Flames still draw the short straw in the basement lottery. They've allowed 19 goals in their past five contests and give up an average of 3.58 goals per game this year. Dougie Hamilton and Mark Giordano continue to struggle on a blueline that should have been one of the more productive squads in the league.