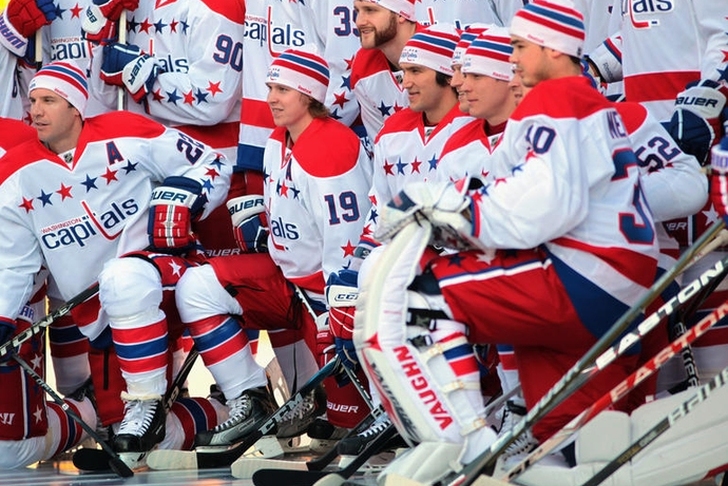 The Holiday season always brings with it a weird jostling in the NHL standings as games are at a premium and travel is heavy. Washington has maintained the No. 1 spot this week, though Dallas is just shy in the points department. The Rangers, Panthers, and Coyotes made the largest leaps in the rankings, while the Canadiens, Bruins, and Avalanche all got knocked down by the largest margins. Below are this week's Chat Sports NHL Power Rankings and as always, make your voice heard in the comments section.

1. Washington Capitals (26-6-2) - Last Week: 1
The Caps maintained top honors by adding another two wins this week. Braden Holtby's 22 wins are four more than Corey Crawford and Jonathan Quick's 18, so goaltending continues to be one of Washington's strongest attributes. The Capitals rank in the top five in the league in penalty kill, power play, goals-for-per-game, and allow the least amount of goals per game of any NHL team.

2. Dallas Stars (27-7-3) - Last Week: 2
We're used to Dallas' high-octane offense at this point in the season, but Kari Lehtonen and Antii Niemi have each registered a shutout in the Stars' last three contests. The latter has yielded a sub-.900 percent save effort just once in the month of December, and will likely get a majority of the nods as long as he stays hot.

3. St. Louis Blues (22-12-4) - Last Week: 4
Though they were shutout by the Stars on Sunday, the Blues still move up a spot and remain competitive due to excellent special teams play, especially that of the penalty kill (86.1 percent effective) and Vladimir Tarasenko and Alexander Steen's repective point totals of 39 and 33 are keeping this offense afloat as they work their way back to a healthy roster.

4. Los Angeles Kings (21-11-2) - Last Week: 7
Loses four of their last six games to the likes of the Sabres and Maple Leafs isn't ideal, but the Kings are staying competitive with healthy possesion statistics: they lead the league in Fenwick, or a measure of shot attempt differential discounting blocked shots, with 58.81 percent.

5. New York Rangers (20-12-4) - Last Week: 10
Make no mistake, the slump is still very much alive in New York. The Rangers have been victorious in just two of their previous eight outings and losses to the Oilers, Flames, Canucks, and Jets litter that ugly streak. Even the greats have their struggles, and Henrik Lundqvist is no exception. The future Hall of Famer has surrendered 10 percent or more of the shots he's faced in his last six games. Luckily for the Rangers, just about every Eastern Conference squad in playoff contention has struggled over the Holiday season.

6. Florida Panthers (20-12-4) - Last Week: 12
Well, this is new. The Panthers are winners of sixth straight and have taken an outright lead in the Atlantic Division. I'm also running out of manly adjectives for Jaromir Jagr.

7. Detroit Red Wings (18-10-7) - Last Week: 9
Detroit has earned points in eight of its last 10 contests and, like most teams in the East, has struggled to gain any sort of consistent winning streak as of late. It seems like Jeff Blashill will continue to rotate Petr Mrazek and Jimmy Howard between the pipes for the time being. Both have been effective, though Mrazek boasts the better numbers. It will be interesting to monitor the situation as it progresses, as Jimmy Howard has a limited no-trade clause and a 5.29 million dollar cap hit through the next three seasons. That's a lot of money to have tied up in a player that's looking more and more like a backup, while fostering the growth of a next-generation NHL starter who will expect to be paid after his one-year deal expires this coming summer.

8. Chicago Blackhawks (20-13-4) - Last Week: 5
Two-straight losses to the Stars and Hurricanes have the 'Hawks reeling, but that's just a hiccup for one of the most lethal teams in the league. Chicago boasts 10 players on the roster with double digit point totals so far this season.

9. Minnesota Wild (18-10-6) - Last Week: 8
Devan Dubnyk is back, but Darcy Kuemper has enjoyed the best season of his young career in relief. Smart money says Mike Yeo stays with Dubnyk, and rightly so, but the Wild have stumbled with him in net as they've lost his last three starts. File this under goalie situations to keep track of.

10. Boston Bruins (19-12-4) - Last Week: 3
Three-straight losses have taken the B's for a tumble down the rankings, which could very well continue if they don't find their rhythm again soon; they play a competitive crop of Eastern Conference foes for the first half of January. The Bruins need that NHL-best power play (27.4 percent) to keep churning out goals for them.

11. New York Islanders (19-12-5) - Last Week: 11
Losing four of your last five games usually requires a ranking adjustment, but the Isles had enough of a buffer to weather the recent storm. They'll have another crack at the Maple Leafs Tuesday night, to whom they dropped a 3-1 decision on Sunday. Jaroslav Halak has been placed on the IR with an upper-body injury, but Thomas Griess has been spectacular in his stead this season. The 29-year old German has been spectacular this season, as he's already matched last year's win total of 9 and sports a .934 save percentage as a surprisingly active backup.

12. Montreal Canadiens (20-14-3) - Last Week: 6
Since Carey Price was injured a month ago, the Habs have gone 3-10-1 and they're currently on a six-game skid. Trading for Ben Scrivens isn't a bad move, but it's the offense that's really been hurting Montreal; they've averaged just 1.50 goals-per-game in the month of December.

13. Ottawa Senators (18-12-6) - Last Week: 14
The Sens are currently in possession of the last wild card spot in the East with a .500 record. They haven't posted back-to-back wins since Dec. 3 and 5 and have won just one away game this month. Consistency and road play need to improve if Ottawa wishes to hold onto that final postseason ticket.

14. Nashville Predators (17-12-6) - Last Week: 13
It's been a very difficult season for three-time Vezina Trophy Finalist Pekka Rinne. While Nashville's elite defensive corps has done its job and allowed the second-fewest shots on goal per game this season, the 33-year old Finn has regressed by a large margin.

15. Tampa Bay Lightning (18-15-3) - Last Week: 16
Slowly but surely, Tampa is working its way back into the playoff picture. The Bolts have only lost to the Kings, Caps, and Canucks this month and have scored three or more goals in four of their last five contests.

16. New Jersey Devils (17-14-5) - Last Week: 17
The Devils have basically strapped the hopes of the season on the back of goaltender Cory Schneider, but he's surrendered at least three goals in three of his last four contests. The fourth-worst offense in the league has got to find a way to put more pucks in the net.

17. Pittsburgh Penguins (17-15-3) - Last Week: 20
Mike Sullivan has his team shooting the puck more frequently, which is generally a good thing. But the Penguins have scored the third-fewest goals of any team this year and with Marc-Andre Fleury's concussion recovery shrouded in mystery, it looks like they won't be able to lean on their stellar goaltender any time soon. Things aren't looking good in the Steel City right now.

18. Arizona Coyotes (17-15-3) - Last Week: 23
The 'Yotes have come up winners in three of their last four contests and six of their last seven games have been decided by one goal. Their goal scoring ranks among the top third of the NHL, but much of that has rested on the shoulders of rising stars Max Domi and Anthony Duclair, the latter of whom has converted on an astounding 27.8 percent of his shots this season. He's averaging about a shot per game, and with his knack for finding the back of the net, that needs to change.

19. Philadelphia Flyers (15-13-7) - Last Week: 18
With the exception of the Sharks, the Flyers' schedule is comprised entirely of playoff hopefuls for the next three weeks. Steve Mason needs to find his game, and fast.

20. San Jose Sharks (17-15-2) - Last Week: 19
The Sharks have won three games in the month of December while losing to the Oilers, Flames, Penguins, and Ducks. The duo of Martin Jones and Alex Stalock has allowed at least three goals in each of the Sharks' last four games.

21. Calgary Flames (17-16-2) - Last Week: 24
Despite ranking ninth in goals scored per-game, the Flames convert just 13 percent of their power play opportunities, the lowest such figure in the NHL. The penalty kill isn't much better, nor are the chances of Calgary finding a way into the playoffs.

22. Vancouver Canucks (14-14-9) - Last Week: 21
Wins in four of their nine overtime losses so far this season would give the Canucks possession of the last wild card in the West. Unfortunately, wishful thinking doesn't win you games and Vancouver can't seem to close out close games this year. At least the Canucks have won three of their last four outings.

23. Colorado Avalanche (17-17-2) - Last Week: 15
A five-game winning streak was abruptly halted by the Maple Leafs last week, and the Coyotes on Sunday. The good news for the Avalanche is that they're back in the positive goal differential club and Semyon Varlomov is, for the most part, back to playing at a high level. The bad news is that Colorado ranks last in Corsi percentage (think the previously mentioned Fenwick, but with blocked shots added in) with a 44.16.

24. Carolina Hurricanes (15-16-5) - Last Week: 26
The Canes have actually played competently the last few weeks. They're 7-3-1 since December 5 and have played against mostly quality competition, and they boast a score-adjusted Corsi of 52.6, fifth best in the NHL. Now it's just that offense, especially on the man advantage, that needs to pick up the pace.

25. Toronto Maple Leafs (13-14-7) - Last Week: 28
The offense has come alive for the Leafs over their last four games as they've averaged 4.25 goals-per-game over that span to accompany three wins. They also haven't lost a game by more than one goal in over three weeks. I guess it's fitting that the players have been enjoying the tunes of a popular Toronto music-maker as of late.

27. Winnipeg Jets (16-17-2) - Last Week: 22
Losses to the Flames and Oilers right before Christmas does not bode well for a Jets turnaround. Neither does a concussion to second line center Mark Scheifele, who will miss an unknown amount of time as he progresses through protocol. He had nine points in his previous nine games.

28. Anaheim Ducks (13-15-6) - Last Week: 29
It's been an up-and-down last few weeks for the Ducks, but here's some potential good news: their next five games are against teams in the bottom third of these rankings. If ever there was a time to get back to their winning ways, it's now.

30. Columbus Blue Jackets (13-22-3) - Last Week: 30
Columbus has won three games in December and things are looking no better for the next month of play. Have fans in Columbus figured out a way to fit "tank" and "Auston Matthews" into a rhyme yet?