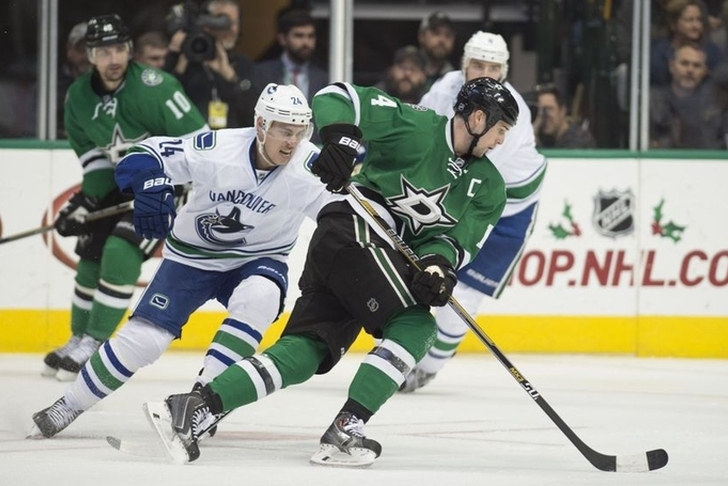 As the holiday season approaches, the NHL playoff race has tightened up in a lot of ways. The last few postseason slots in each conference are wide open this early in the season and teams like the Islanders, Panthers, and Oilers - yes, you read that correctly, the Oilers - have taken notice. Meanwhile, the Blues, Sharks, and Ducks continue to slide down the standings. The Stars remain in the top spot this week, but the Capitals and Canadiens are knocking on the door.

Below are the NHL Power Rankings for December 15. As always, feel free to sound off in the comments section.

The league's best offense continues to roll. Tyler Seguin and Jamie Benn are tied for second in the NHL points race with 40 each. Logic dictates that the subpar goaltending supplied by Antti Niemi and Kari Lehtonen should have caught up to them by now, but the Stars show no signs of slowing down.

It's been a steady climb up for the Caps the last few weeks, but an 8-1-1 record in their last 10 has really jettisoned them into the "best team" discussion. Braden Holtby has been lights out - he's stopped less than 90 percent of the shots he's faced in a game just three times since the start of November - and he's already one win away from the 20 benchmark. Fatigue could be an issue in the playoffs but right now, Holbty and co. are on fire.

The injury-plagued Canadiens finally snapped a four-game losing streak on Saturday. They allowed three goals in each of those losses and the Mike Condon / Dustin Tokarski duo has been average at best in Carey Price's stead. Brendan Gallagher is back on the ice skating for the first time since fracturing two fingers on Nov. 22, though, so perhaps help is on the way sooner rather than later for the suddenly offensively-inept Habs.

Hail to the Kings, baby. A pair of recent losses keeps the City of Angels out of the Top 3, but they're getting it done in December, on and off the ice. As has been the case all season, the Kings' possession stats are some of the best in the league.

For the first time this year, the Islander have supplanted the Rangers as the best team from the big apple. An 8-0-2 run in their last 10 games has elevated the Isles' spot in the standings rather drastically and Kyle Okposo (!) is now the team's leading scorer. Jaroslav Halak and Thomas Greiss each have nine wins each this season and sport goals against average numbers just above two per game.

The Blueshirts' tumble continues. A 2-6-2 record over their last 10 games is inexcusable for a team of this considerable talent and the defensive corps has been bafflingly bad as of late. It's been up to Henrik Lundqvist (who else?) to carry the load. Minus a shellacking in Edmonton on Saturday, he's been the lone bright spot in December for New York.

This is the kind of play we've come to expect from the 'Hawks. Corey Crawford is sitting pretty with two consecutive shutouts and, apparently, it's Patrick Kane's world and we're just living in it. Mats Sundin was the last player to score in 30 consecutive games when he did it with Quebec in the 1992-93 season. If the improbable streak continues, Kane will best that total before Christmas; he sits at 26 entering a Dec. 15 date with the Avalanche.

The Wings would be higher if they hadn't dropped three of their last four, two of which were settled after regulation. Despite a lack of point production (eight points in 16 contests), Paval Datsyuk continues to excel in the more nuanced aspects of the game a month after his return from an ankle injury.

Even though they sport the same record as the Blackhawks, the Blues have been off recently. Their last three losses have come to the Maple Leafs, Flyers, and Avalanche, though they managed to shut out the Stars during that rough stretch. St. Louis has the league's best penalty kill and hasn't allowed a man-disadvantage goal in their previous eight outings, but that's little to hang your hat on when the offense isn't working how it should be.

After a spike in last week's rankings from No. 15 to No.7, the Wild have seemed to settle into a spot just inside of the Top 10 for the time being. Their last three wins have been of the shuout variety, and the Devan Dubnyk/Darcy Kuemper tandem hasn't allowed more than two goals in a game yet in December.

Three of Bruins' four December losses have come to Edmonton and Calgary. While that's not good, Boston's power play sure is.

Six Senators boast 20 or more points so far this season, which translates to the fourth-best goals-per-game total in the NHL. Special teams have got to get better, though. The Sens convert less than 80 percent of penalties successfully, and score on one out of every five man-advantage situations.

In the last month, Pekka Rinne has stopped 90 percent or more of the shots he's faced a gaudy three times in 11 contests. That's flat-out appalling, and not the brand of play we've come to expect from a goaltender capable of elite numbers.

Though he was chased from the net in his most recent start, Cory Schneider's .924 save percentage and 13-8-4 record is still quite impressive considering his team's middling tendencies.

After an initial struggle followed by a hot streak, the Pens have sunk back into mediocrity, or perhaps worse. They're 3-4-3 in their last 10 games and things don't get any easier with a home-and-home series against the Bruins looming.

Jaromir Jagr needs one more tally to pass Marcel Dionne for fourth place on the all-time goal scoring list, and he's just 10 shy of Brett Hull. After all is said and done and he retires a young man of 63, I fully expect his blood to be the foundation of a breakthrough, anti-aging syrum.

Even when things seem to be getting better in Tampa, they're actually getting worse. Yes, I'm talking about the Steven Stamkos fiasco.

Like the Lightning, the Jets are drastically underacheiving one year removed from the best season in recent memory. Winnipeg benefitted from the division realignment last year. This year, however, they've won just three of 12 division contests. Yikes.

San Jose has dropped six-straight and, along with Vancouver, possesses the most overtime losses in the NHL this year. If you want to make a run in the playoffs - or make the playoffs to begin with - you have to win close games. The Sharks have not done that this year.

I feel so dirty for putting the Oilers inside the Top 20. But they're winners of six straight games against quality competition such as the Bruins, Stars, and Rangers. They've also managed to do this all without that Connor McDavid guy, largely due to Taylor Hall's best season so far of his young career; he has 34 points in 31 games, good for fourth in the league. None of this changes the fact that I feel like I need to take a shower, though.

The 'Yotes have dropped six of their last seven contests and sunk back into their old ways. At this point, it's really only a matter of time before Mike Smith becomes the most expensive backup goalie in the league.

Ryan Miller has the third-most losses and most overtime losses of any goalie this season. He's made the fourth-most saves in the league and allowed the second-most goals. All of this means that he - and the defense - needs to be better.

The Flyers might be 6-3-1 in their last 10 games, but they still maintain a minus-21 goal differential. For a .500 record in regulation, that's not a sign of good things to come.

There isn't much separating the bottom half of the Western Conference - the difference between the No. 7 and last place No. 14 is just three points - and so the Avs have profited from this parity. The minus-three goal differential breathes hope into the possibility that Colorado could start stealing some of its closer games, and if Semyon Varlamov can find his groove, things could be looking up.

Ryan O'Reilly (and his rockin' beard) are still going strong - he has 28 points in 31 contests. The Sabres have won their last two but still can't find much consistency in all three zones or for all three periods of play.

The Hurricanes have won four of their last five and registered five goals in each of their last four games. While this offensive burst is a welcome sight in Raleigh, a lackluster power play and the second-worst penalty kill in the league are still intimidating obstacles to more sustained winning.

Bob Hartley's seat has cooled significantly now that the Flames have won five straight games. Johhny Gaudreau has 10 points in his last five outings, and Calgary has also won its last seven contests on home ice. If the goaltending situation can get sorted out - perhaps Karri Ramo can find his spark again - maybe the Flames could make a playoff push as equally improbable as last year. That's a tremendous maybe, though.

Maybe it shouldn't be at this point, but seeing the Ducks in the West's cellar is baffling. Corey Perry and Ryan Getzlaf have mostly moved on from their slow starts, but it's the lack of depth production that's startling in Anaheim's case. Ryan Kessler and Cam Fowler rank fifth and sixth in team scoring with 11 and 10 points through about a third of the season. Carl Hagelin and Jakob Silfverberg have seven and six points, respectively. They're at the bottom of the worst division in hockey and there's no excuse for it.

Jonathan Bernier has returned to the NHL with a new perspective after a confidence-boosting stint with the Marlies. He'll get the start tonight against Tampa looking for his first win of the season.

They've lost seven of their last eight, and any hope the Jackets had of counteracting their painfully slow start to the season have vanished with poor third period play and an aloofness on defense not often seen at the NHL level. Sergei Bobrovsky has been in net for all 11 of Columbus' wins and has looked better in December, but he needs to regain his Vezina-winning season form if his team wants to be relevant again.