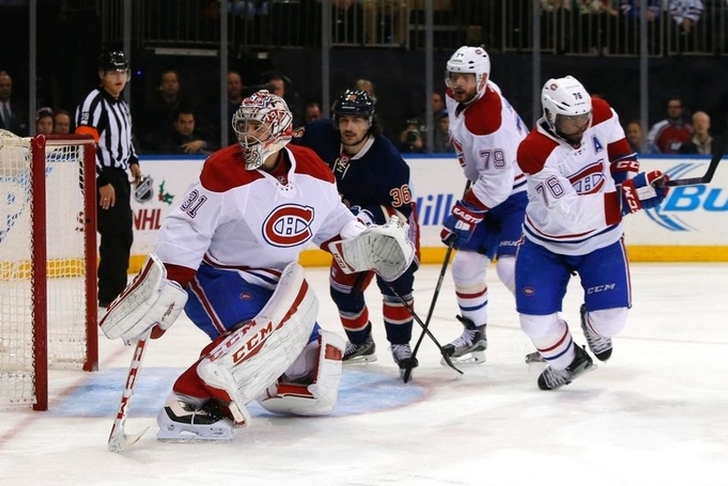 We have a new team topping the polls this week, but Montreal's ascent isn't without its baggage; Carey Price will now miss a minumum of six weeks with a lower body injury. This is coming after a nine-game absence earlier in the young season and will give the streaking Stars, as well as a few other teams near the top, a chance to take a shot at No. 1.

Last week's leader, the New York Rangers, have lost three-straight contests and join Nashville and Minnesota as notable teams that have taken a tumble in the past week. Organizations such as Los Angeles, Boston, and Chicago, however, have made moves up the ladder. The season is still young and there's plenty of parity, especially among the last few playoff spots in each conference. Below are this weeks rankings, and as always, sound off in the comments with your own take.

Losing Carey Price is another tough break for a squad that was already without him for a nine-game stint this year. But if Mike Condon and company are able to hang on without him until January, it'll be another hurdle cleared by this resilient group that owns an NHL-best plus-32 goal differential.

Like last week, the Stars very nearly grabbed the top spot. John Klingberg continues to put in work worthy of the Norris Trophy, he, Tyler Seguin, and Jamie Benn are three of the leading five scorers in the league, and Dallas has won eight of its last 10 games. The only looming question mark is goaltending, and whether or not Anti Niemi and Kari Lehtonen can continue to cobble together enough good starts to keep the Stars in frontrunning position.

The Blueshirts snapped a three-game skid Monday evening, but questions still linger about the effect of Derek Stepan's recent injury, and on what end of the four-to-six week spectrum he will fall. Like the Habs, we stand to learn much about this talented Rangers squad in the absence of a key cog in the wheel.

Braden Holtby continues to be a workhorse in the crease for a second year running and owns the league lead in wins with 15 in 19 appearances. The Caps' third-ranked power play is also living up to its hype as one of the best around, and it's a big reason why they're winners of five games in a row.

Is Jake Allen actually bringing balance to the Blues' blue ice? His .930 save percentage ranks fifth among goalies with 10 or more starts. Having Paul Statsny draw back into the lineup is a huge boost as well, and has endowed this top-six group of forwards with some much needed stability.

Johnny Quick continues to be largely pedestrian (Jhonas Enroth actually boasts a much better statline in his four starts), the power play ranks 17th among NHL squads, and the Kings have dropped three of their last five. Yet they're still moving up this week in the NHL standings. How? Much of it has to do with possession in key moments of the game. The Kings' "shot attempt percentage close," a measure of all shot attempts for and against a squad when the game is tied or one team leads by only a goal, has been rock-solid. This stat has a history of playoff importance and L.A. boasts the best figures in the third period this year, not to mention the highest shot per game average in the league.

The Sens have been victorious in four of their last five contests, and Erik Karlsson has been nothing short of fantastic anchoring the blueline this year with 26 points in 23 games. Bobby Ryan's renaissance year continues, as well.

Martin Jones has been nothing short of studly in his first year as a NHL starter and leads the league in shutouts with three. The Sharks have now won seven of their last 10 meetings.

That minus-two goal differential is still concerning, but Marc-Andre Fleury has played admirably considering the patchwork defense and struggling offense as of late. He's tied for the second-best save percentage among goalies that have faced over 500 shots this year with a .926, and he'll need to continue to be sharp to keep Pittsburgh as high up as its been climbing in the standings these days.

Patrick Kane's 19-game point streak is a record for an American-born player, which is surprising considering scoring greats like Brett Hull, Mike Madano, and Joey Mullen were from the good ol' U.S. of A. On a team loaded with talent, the fact that Kane holds the scoring lead and is most likely the front runner for the Hart Trophy is even more impressive. The Hawks are 6-2-2 in their prior 10 bouts.

Will the real Pekka Rinne please stand up? Nashville's favorite Finn has struggled in his past few outings, and he's seen his save percentage slip to.911 - well south of the league average and good for 27th among goaltenders. He's dropped four of his last five contests, too, but he's not entirely to blame. The Preds rank in the bottom-third of the league in special teams, which is not a good sign.

Here's a case where special teams are actually a big part of a team's success: Boston's NHL-leading 32.4 percent power play conversion rate accounts for nearly a third of its goals this year. The Bruins have also spent the second-least amount of time on the man advantage, likely because of the rate at which they're scoring. They've won five-straight.

The Islanders have won three of their last four contests, but they'll have a tough road the next week. Dates with the Rangers, Blues, and Senators will be a nice window in to just how this Johnny Tavares-led squad fares against top competition.

Detroit still struggles to put the puck on net with satisfactory frequency, and is ahead of just Minnesota and New Jersey in shots per game this season with 27. That's got to change if the Wings want to make the playoffs for the 25th time in a row.

The Wild have dropped six of their last seven contests, but they'll play the Maple Leafs, the Avalanche twice, and the Coyotes from Dec. 3 to 11, so there's a chance to get back on track and snag some points in the standings.

Losses to the Flames, Oilers, and Blue Jackets in recent weeks had signs of a tailspin, but a win over the Canadiens Saturday shows that the Devils still have some fight left in them. They'll keep leaning on Cory Schneider, who continues to be one of the most underrated goaltenders in recent memory.

Just when you're ready to count it out, Arizona wins four of its most recent five matchups. Max Domi continues to put in Calder-caliber work for the desert dogs and has 20 points in 23 games. Maybe it's his playmaking ability that makes him look seasoned beyond his years. Or maybe it's because Michael Jordan blessed him with greatness as a young child.

I wonder if the Panthers enjoy having Aleksander Barkov back in the lineup? He might be the premier, young talent in Sunrise, FL, but it's Jaromir Jagr and Jussi Jokinen (so much alliteration) that lead the team's one-two scoring punch. They're also a combined age of 75, which doesn't seem like it should be possible. All the scoring in the world won't matter, though, if that defense doesn't start shaping up.

After sweeping a three-game homestand, the Bolts dropped two in a row last week. It's still perplexing to see last year's Stanley Cup Finalists struggle this mightily out of the gate, though it seems that Ben Bishop has finally found a rhythm between the pipes in Tampa. The 29-year old has a .926 save percentage despite a middling 9-8-2 record.

The Canucks have lost seven of their most recent nine, so their slight gain in the standings is more a function of teams around them doing equally as bad. They finished up November by being shutout by a Ducks squad that started John Gibson - not the way you want to end a month.

The precipitous fall continues for last year's Western Conference playoff Cinderella. The Jets won just four of fourteen games in the month of November and allowed an average of just under four goals per game in that span.

The scoring has picked up by a slight margin in Anaheim, but the season has yet to see a decided turnaround for a team that loads of experts picked to finally make a run at the Cup this year. Unless the Ducks can find their footing, and quick, there will be no quacking come April.

Rookie phenom Jack Eichel might have cooled off in the latter half of November, but the Sabres were beat by more than two goals just thrice in November and have been largely competitive to date. But close only counts in horseshoes and hand grenades, not professional hockey.

In their last 10 combined starts, Steve Mason and Michal Neuvirth have registered below a .900 save percentage just once. The former is 1-2-2 in that span, the latter 3-1-1. Hockey can be weird sometimes. Anyway, Philadelphia has won three of its last four outings, an encouraging sign for a city that hasn't had much to cheer about this season sportswise.

Here's a fun fact: you, the humble reader, have as many NHL wins as Jonathan Bernier since April 5. Well, the Leafs were aware of that fact, too. So with James Reimer still dealing with a nagging injury, they called up a former ECHL obscurity, seventh round draft pick, and goaltending social media darling Garret Sparks to hold down the fort Monday, and he became the first Toronto netminder in history to earn a shutout in his NHL debut with a 3-0 win over Edmonton. Equally impressive to his first 60 minutes in the show is the set of pads he rocks (which, as we all know, is the second most important aspect of goaltending).

It's been a struggle for the Canes to close out November. They have but a pair of wins in the past 10 games and a recent Forbes article estimates that Carolina is the third-lowest valued team in the NHL, monetarily speaking. To add insult to injury, admission figures are continuing their recent, downward trend.

The Jackets are actually on a 6-3-0 run since Friday the 13th, but it remains unseen if any bad-luck scenarios will kill this team's potential like the injury scourge of last season.

Will Varlomov regain his confidence? Will the trade rumors persist indicating he and Matt Duchene will be traded? Who knows anymore. Head coach Patrick Roy has reaffirmed his faith in Varly, but unless the Avs can get moving - they've lost five of their last seven - there could be a changing of the guard here soon, in terms of both goaltender and bench boss.

The NHL's worst defense will host the league's best offense on Monday. It doesn't look like the Flames will be starting December off the right way.

Edmonton was blanked by the Eastern Conference's then-last place Toronto on Monday and except for largely mediocre special teams play, it's pretty much all bad.