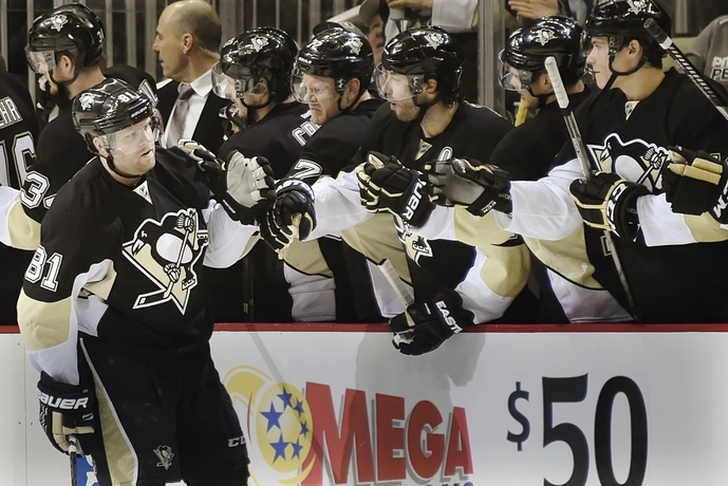 Believe it or not, the Stanley Cup Playoffs are no more than nine days away. Where did the season go? While you and a few select teams (*cough, Canadiens) ponder that question, squads like the Capitals have locked up the President's Trophy. But the West has yet to be won, and the Bruins, Flyers, Islanders and Red Wings are locked in a battle for the final few playoff spots out East. Meanwhile, the Penguins have gone on a tear and currently hold home ice-advantage over their Metropolitan Division foe, the Rangers.

Below are the Chat Sports NHL Power Rankings entering the last week of regular season play. As always, make your voice heard in the comments section and follow me on Twitter for even more hockey coverage.

1. Washington Capitals (55-17-6) - Last Week: 1
With the President's Trophy locked up, the Capitals need only to rest up and prepare for a playoff run. Of note: there's a very real possibility that the Capitals draw the Flyers in the first round of the playoffs. Philadelphia has had the most success of any team against Washington this season and earned the season series split following a 2-1 shootout win last week. The physical Flyers match up well against the Caps, which would make for an excellent opening round. A further breakdown of potential matchups for the Capitals and how possession-related statistics and goaltending measure in can be found here.

2. Dallas Stars (48-23-9) - Last Week: 2
The Stars are 10-2-2 in their past 14 games and have padded their lead in the Central Division, though the Blues and Blackhawks are hot on their heels. Dallas's 105 points is the best franchise showing since the last time it won its division a decade ago. Wins in the last two games would guarantee the top spot in the West to the Stars.

3. St. Louis Blues (47-23-9) - Last Week: 3
Once again this season, the Blues have lost a goaltender to injury. Jake Allen will undergo further evaluation in the next 24 hours, but for now it's Brian Elliott's uncontested goal again. The St. Louis offense has been extremely productive as of late, and has netted 21 points in its last five games. Though he's been held off the scoresheet for four of those five contests, Jaden Schwartz has garnered 18 points in his 22 appearances since returning from a fractured ankle in February.

4. Anaheim Ducks (44-24-10) - Last Week: 5
The best special teams units in the league have propelled Anaheim to the heights of the Pacific after a disastrous start to the season. The Ducks could be the first team to finish the regular season with the top-ranked penalty kill and power play since the 1984-85 Islanders, a team that was one year removed from five-straight Stanley Cup Final appearances.

5. Pittsburgh Penguins (46-25-8) - Last Week: 11
The Penguins are now 11-1 in the absence of Evgeni Malkin (who will be held out of play for another month at the very least), and there isn't a hotter team in the league right now. Six straight wins has given Pittsburgh its fifth 100-point season in the last seven years. Phil Kessel has finally found a rhythm in the Steel City and Sidney Crosby has recorded 26 points in his last 19 contests. It's not all sunshine and rainbows, however; goaltender Marc-Andre Fleury's second concussion of the season has sidelined him indefinitely, which will force prospect Matt Murray between the pipes for the time being. The Thunder Bay, ON native boasts a 7-2-1 record with a .933 save percentage and a shutout this season.

6. Los Angeles Kings (46-27-5) - Last Week: 4
The Kings have now lost four of their last six, giving the Ducks a shot at the Pacific title. Jonathan Quick stumbled a bit at the end of March with three sub-.900 save percentage showings in a row, but has responded with a shutout win over the Flames and a 36-save loss to the Stars on Saturday. He's tied his NHL career-best 39 wins on the year and requires just one win in his team's final four games to hit the 40-victory plateau.

7. Chicago Blackhawks (46-26-7) - Last Week: 8
After slumping for the majority of March, the Blackhawks offense has come alive to net 19 total goals in its past five outings. Artemi Panarin has posted back-to-back four point games. Also, Corey Crawford should be back prior to the playoffs. You can breathe a little easier, Chicago fans.

8.  Florida Panthers (44-25-9) - Last Week: 7
Habs head coach Michel Therrien called the Panthers top billing of Jaromir Jagr, Aleksander Barkov, and Jonathan Huberdeau "phenomenal" on Saturday before adding that they "dominate the game." Huberdeau is riding a five-game goal streak and Barkov has tallied at least one point in each of his last five games, including a four-point effort over the Canadiens that led Therrien to such praise. The Panthers are playoff bound for the fifth time in franchise history.

9. New York Rangers (43-26-9) - Last Week: 6
Henrik Lundqvist lasted just 21 minutes Saturday against a bottom-five team in almost all scoring and possession categories. The Sabres kept the Blueshirts from cementing a spot in the postseason, who, along with the Lightning, are the winningest teams yet to guarantee a playoff berth. This weekend's loss is pretty representative of the season as a whole; whenever the King isn't on between the pipes, the team in front of him struggles to control the game. A 47.17 Corsi-for percentage (27th in the NHL) will do that to you.

10. Tampa Bay Lightning (45-28-5) - Last Week: 9
Steven Stamkos is out for the forseeable future with blood clots in his arm, striking even more injury uncertainty into Tampa Bay's up-and-down season following last week's loss of blueliner Anton Stralman to a broken leg. Remember, Stammer still hasn't signed with the Lightning. As of July 1 he's an unrestricted free agent, which means there's a real possibility we'll never see the captain in a Bolts uniform ever again. In the meantime, the Lightning will have to hope that the Triplets Line can pick up the slack, which is entirely possible. Nikita Kucherov has recorded a career-high number of goals (30) and points (64) this season, and Ondrej Palat tallied 16 points in 14 contests last month.

11. San Jose Sharks (44-29-6) - Last Week: 13
Matchups with the Wild, Jets, and Coyotes are all that remain for the third-best squad in the Pacific Division. The Sharks are three points behind the Kings for home-ice advantage in the opening round and have one less game than L.A. to make it happen. It's too bad Joe Thornton's personal scoring pace can't be put towards the standings - the Bill Masterton Trophy nominee has one goal and five assists in his past four games, and his 78 points on the year is good for fifth in the NHL.

12. New York Islanders (42-26-9) - Last Week: 12
After dropping four-straight contests in mid March, the Islanders rebounded for a three-game win streak last week before the Penguins bested them 5-0 on Saturday. John Tavares made it known that his team needs better from all its moving parts, but the talented captain isn't absolved of all his sins, either. He's registered just three goals in his past 11 outings, and netted one point on the man advantage in that stretch.

13. Nashville Predators (39-26-14) - Last Week: 10
Just when we thought he was on the mend, Pekka Rinne has been chased from two of his three most recent starts and the Predators are limping to the finish line, though a shootout loss to the Sharks has guaranteed Nashville a seat at the postseason table across from either the Ducks or Kings. The last time the Nashville met Anaheim in the playoffs, they roasted the Ducks 4-2 in the opening round of 2011. The Preds have never met the Kings in April.

14. Philadelphia Flyers (39-26-13) - Last Week: 15
Philadelphia has edged Boston out of the final wild card spot and the Eastern race is the one to watch from here on out. Hopefully for the Flyers faithful, this incident isn't a foreshadowing of things to come.

15. Detroit Red Wings (40-28-11) - Last Week: 16
Rejoice, winged wheelers; all is not lost! The Red Wings have revived their playoff hopes and enter the final week of the season with contests against two of the foes with whom they're battling for playoff spots. Two wins and they're in. Make some popcorn, grab a seat, and watch as Detroit attempts to reach the postseason for a 25th consecutive year.

16. Minnesota Wild (38-31-11) - Last Week: 17
Minnesota has failed to earn a point in the standings over its last 180 minutes of play, which has kept the melting Avs on life support. But a single win to close out the season will guarantee the Wild the final postseason spot out West. They have games at home against the Sharks and Flames left to do so.

17. Boston Bruins (41-30-8) - Last Week: 14
The Bruins have claimed victory a mere three times in their last 10 outings and are now the first runner up in the East's playoff race. Once the hottest offense in the league, Boston largely failed in finding the back of the net over the month of March. The B's now have three games remaining - all at home - including a showdown against divisional foe Detroit.

18. Colorado Avalanche (39-36-4) - Last Week: 18
The Avs have stumbled down the stretch, losing five of their last six games to fall five points behind the Wild for the last playoff spot out West. It looks as if we've witnessed another late-season collapse from Colorado and Patrick Roy is less than pleased about this.

19. Carolina Hurricanes (34-29-16) - Last Week: 19
The Hurricanes have been officially eliminated from playoff contention thanks to a 5-1 bruising by the Blue Jackets Saturday. This is the seventh-straight year Carolina has been shut out of the postseason, but the future is (hopefully) bright.

20. Ottawa Senators (36-34-9) - Last Week: 22
Hey, that guy with the funny last name is building a $2 million dollar home! You just know that now he'll get shipped off to, like, Florida this offseason.

21. New Jersey Devils (37-34-8) - Last Week: 20
Cory Schneider felt better than he expected he would in his return to action Saturday, a 3-1 loss to the Lightning. Injuries have weakened an already-struggling Devils offense; they've scored just 12 goals in the past seven contests.

22. Arizona Coyotes (35-36-7) - Last Week: 21
Arizona finished its final home game of the 2015-16 season in style, blanking the league-leading Capitals. Max Domi is going to be a treat to watch for years to come. (Bonus content: he and Washington's Nate Schmidt even dropped the gloves in this one!)

24. Buffalo Sabres (33-35-11) - Last Week: 24
Buffalo has won four of its last six contests, and that recent success has likely cost it a realistic shot at the lottery. Luckily for the Sabres, they've already got a youthful corps with a great future ahead of them.

27. Vancouver Canucks (29-36-13) - Last Week: 29
Two of Vancouver's most exciting prospects are heading to the NCAA Frozen Four this upcoming weekend. Canucks fans, get very familiar with the name Thatcher Demko - that is, unless Vancouver ships him off like it did another Boston College standout.

28. Columbus Blue Jackets (31-39-8) - Last Week: 27
Brandon Saad netted his first career hat trick this weekend. It's been a tough season for the Jackets but Saad has done a decent job with 48 points, and acquiring the ex-Hawk has proven a wise move by Columbus, as was its acquisition of Seth Jones on the back end.

29. Toronto Maple Leafs (28-39-11) - Last Week: 28
The season may be over but Garret Sparks has been given valuable experience at the NHL level this year. Woo!

30. Edmonton Oilers (30-43-7) - Last Week: 30
The Flames destroyed the Oilers in the Battle of Alberta and that 5-0 shellacking is pretty representative of the season at large.