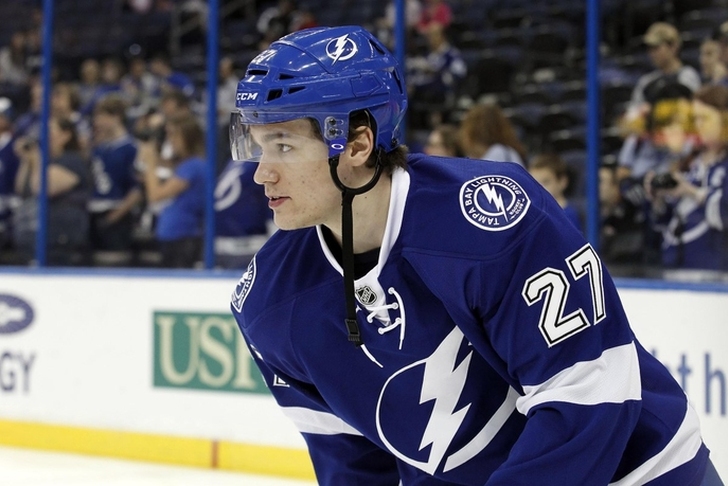 The NHL Trade Deadline is just one week away and speculation is starting to pick up steam. It might end up being a quieter deadline than recent years, as there isn't as much big-name talent linked to possible deals. There will still be several moves made, including some with well-known players.

It's tough to predict which players are moved, and even harder to guess where. With that in mind, we've picked four well-known players that could be dealt before the Trade Deadline and taken a shot at guessing where they'll end up.

When the Lightning demoted Drouin to the farm team, Drouin wasn't happy about it. He wanted to be moved in November, and has yet to get his wish. The No. 3 overall pick, at this point, is essentially holding out until he is moved. Lightning GM Steve Yzerman hasn't pulled the trigger yet, as he tries to get as much value as he can for his disgruntled forward. But it seems likely Drouin will be on his way out at some point.

Landing Spot: Ottawa Senators
The Senators are known to have interest in Drouin and are the front-runners to land him. Assuming Drouin is dealt, Ottawa seems like the eventually destination. Staal's future is very much up in the air. He's already gone on record saying he wouldn't be crushed if the Hurricanes dealt him, even though he's spent his entire career in Carolina. While the Hurricanes haven't asked him to waive his no-trade clause yet, he's among the bigger names that could be dealt before the Trade Deadline. Staal is a pending free agent and the Hurricanes might not be able to out-bid his suitors in free agency. The Ottawa Sun reports the Chicago Blackhawks, New York Rangers and Florida Panthers are all interested in Staal.

Landing Spot: Rangers
The Rangers are in a position to win now, and could use the boost that Staal would provide. The Blackhawks might not have the money needed to take on Staal's contract, while the Panthers are an intriguing dark horse. For more NHL news, download the Chat Sports Android and iPhone app.

NOW READ: 4 HUGE Potential Trades No One Is Talking About

Ladd is the top rental forward on the market, making him a popular trade candidate for several teams. TSN reports at least six teams, the Blackhawks, Ducks, Panthers, Kings, Penguins and Capitals, have interest in Ladd. The Western Conference teams don't want their competitors to land Ladd, which could help drive up the return the Jets get.

Landing Spot: Blackhawks
Ladd's price might become too much for Chicago, but they're looking for a rental forward they can put in their top 6. Ladd is the best one and his salary is manageable for Chicago. The sleeper team here is the Florida Panthers. For more Blackhawks coverage, check out the Chat Sports Android and iPhone app. Things didn't go according to plan this season for Columbus, which makes them likely sellers at the deadline. Hartnell is a veteran forward and could end up being dealt, according to The Columbus Dispatch. If he does get dealt, there are a variety of possible destinations.

Landing Spot: Pittsburgh Penguins
This is more rumor than report, but the Penguins have been linked to Hartnell. Hartnell's contract wouldn't be the easiest for the Penguins to take on. The most interesting thing about this deal is that Hartnell has often drawn the ire of Penguins fans, dating back to his Flyer days. This might be a bit of a stretch, but it would be among the more intriguing deals.