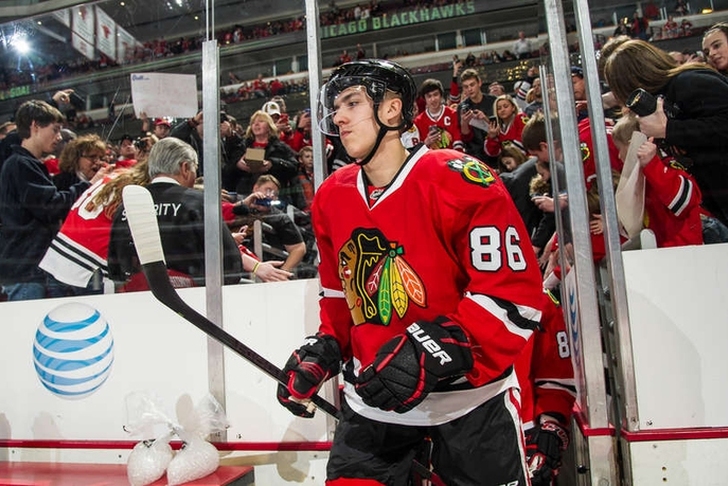 One of the first major trades of the NHL offseason is complete. The Chicago Blackhawks have shipped talented young forward Teuvo Teravainen and veteran forward Bryan Bickell to the Carolina Hurricanes in exchange for a 2016 second round pick and a 2017 third round pick.

"This deal allowed us to use some of our collected draft picks to improve our group of forwards for the coming season by added two Stanley Cup champions,” Hurricanes GM Ron Francis said. "Teuvo is a young, highly-skilled player still on his entry-level contract who is coming off of a strong first full NHL season, and Bryan is a veteran who has experienced great success in his career. Both players give our organization more options and flexibility among the forward ranks."

The Blackhawks had long tried to move the hefty contract of Bickell. They finally found a taker, but at the cost of Teravainen. Trading talented young players has been a staple of recent offseason for the Blackhawks, as they've battled cap issues. Last year, they traded away Brandon Saad.

Bickell was set to count $4 million against the cap this season. Tervavainen played in 78 games last year, recording 17 goals and 22 assists. The forward from Finland is still just 21 years old. He was the No. 18 pick in the 2012 NHL Draft.

The second rounder this year is No. 50 overall and originally belonged to the New York Rangers, with the Canes acquiring it in a trade that sent out Eric Staal. Essentially, the Hurricanes have turned Staal and 2017 third rounder into Teravainen, Aleksi Saarela (a talented 19-year-old from Finland) and a 2017 second rounder. That's an impressive move by Francis.