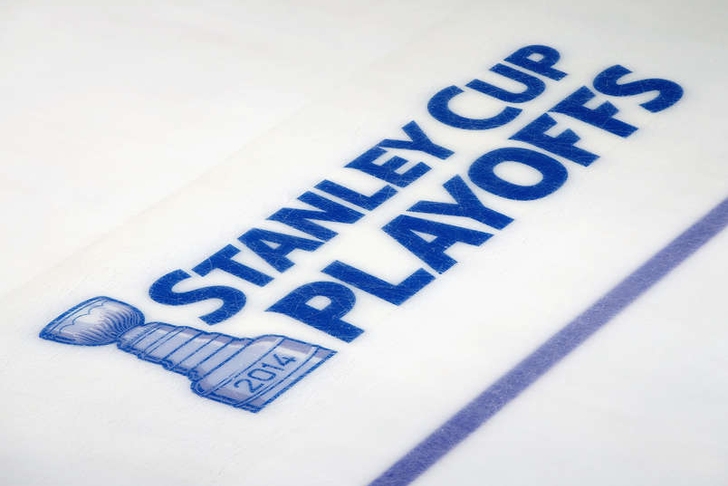 This year's playoffs have come down to a battle between four teams, but the Los Angeles Kings and the New York Rangers are both one game shy of heading into the final round of the Stanley Cup Playoffs. Let's recap how both teams ended up in this crucial position.

The Blackhawks edged pass the Kings with a final score of 3-1. Brandon Saad opened the scoring in the first period from a tip-in power play goal after Alex Martinez received a penalty for roughing Brandon Bollig after the whistle was blown.

During the second period, Tyler Toffoli of the Kings tied the game with a tip-in at the front of the net. Duncan Keith helped the Blackhawks get the lead back shortly after with a slap shot deflected off Kings forward Trevor Lewis' stick. It was the first goal from a Blackhawks defenseman since the first round.

Though this is a rematch of last year's Western Conference final, the end result doesn't seem to be headed the same way.

The Kings returned to the United Center knowing that they could not give the Blackhawks confidence going into game three at the Staples Center, and they accomplished what they had come to do even after a rough start.

The Blackhawks had a two-goal lead by the middle of the second period thanks to Nick Leddy and Ben Smith. At the 18:14 mark of the second period, Justin Williams scored with a tip-in to give the Kings the momentum that they needed for the third period.

During the third period, the Kings scored five goals from Jake Muzzin, Tyler Toffoli, and Jeff Carter, who eventually completed a hat trick.

It was the Blackhawks' first home loss of this year's playoffs.

There was some doubt that the Kings would be able to continue playing with the same amount of energy from game two, and those doubts seemed to be right at first - Toews scored the first goal after stealing the puck at center ice and beating Jonathan Quick five-hole.

Toews scored his second goal of the game from a wrist shot after Slava Voynov tied the game up on a power play less than a minute after Toews' first goal.

Things changed in the second period once Jeff Carter scored his fourth goal in his last three periods after Tanner Pearson passed him the puck from behind Corey Crawford's net.

Tyler Toffoli gave the Kings their first lead of the game after beating three defensemen and sliding the puck right underneath Crawford's left leg. Drew Doughty continued to extend the Kings' lead with a slap shot after Justin William's face-off win.

Patrick Sharp scored with five seconds left in regulation, but it wasn't enough to win the game.

The Kings knew they had to score first to keep their winning streak going, and that's exactly what they did.

Jake Muzzin, Marian Gaborik, and Dustin Brown all scored in the first period of the game to give the Kings a three-goal lead. Drew Doughty created a four-goal lead in the second period from his wrist shot.

Brandon Saad and Bryan Bickell tried to give the Blackhawks more momentum by cutting the lead down to two, but it still wasn't enough as Tanner Pearson assured the Kings' win with an empty netter.

Game five will be played on Wednesday, May 28th at 8 PM.

The Rangers were nervous as they entered Bell Centre, since they've been shut out in five of their last seven games on the Canadiens' home ice. All their fear vanished once they finished game one with a score of 7-2.

Rene Bourque cut the Rangers' lead in half in the middle of the second period, but it was all Rangers from there. Though Lars Eller scored a shorthanded goal with four minutes remaining, Canadiens didn't have enough time or strength to make a comeback.

Carey Price would not be playing in the rest of the series after this game.

The Canadiens were filled with emotion at the start of the game and came out with a ferocious start. Max Pacioretty deflected a shot into the net to give the Canadiens the lead only a few minutes into the first period.

However, only 17 seconds after the goal, Ryan McDonagh tied the game with a wrist shot that couldn't be stopped by Dustin Tokarski due to numerous players blocking his vision at the front of the net.

In the second period, Martin St. Louis scored the final goal of the game from a mean one-timer during a power play.

Henrik Lundqvist stopped 40 of the 41 shots to help New York earn the win.

The Canadiens needed a win, and viewers needed some overtime action. This would be the first game in round three to go into overtime.

During the first period, Carl Hagelin patiently waited to pass the puck perfectly to Martin St. Louis, but St. Louis' shot was blocked by Tokarski. Luckily, Hagelin was in the exact position to receive Tokarski's rebound and tip it in for the first goal of the game.

Andrei Markov and Daniel Brière scored in the second and third period to give the Canadiens the lead. However, with only 29 seconds left in regulation, Rangers forward Chris Kreider's redirection that went wide was hit by Montréal defenseman Alexei Emelins' skate, which allowed the Rangers to tie the game.

The game went into overtime, but only for a minute and twelve seconds as Montréal forward Tomas Plekanec's wide shot landed on Alex Galchenyuk's stick for a perfect tip-in.

In the first period, the only goal was scored by Carl Hagelin on a breakaway during a power play.

Francis Bouillon went top-shelf in the second period to tie the game up.

Derick Brassard gave the Rangers a lead just before the second period ended. The lead didn't last long as P.K. Subban tied the game at the slot.

Even with 18 minutes remaining in regulation, it wasn't enough for the two teams to determine the winner.

At 6:02, Martin St. Louis was the Rangers' overtime hero as he scored a beautiful wrister top-shelf.

Game five will be played on Tuesday, May 27th at 8 PM.