Winners And Losers From Day 5 Of The 2017 NFL Combine 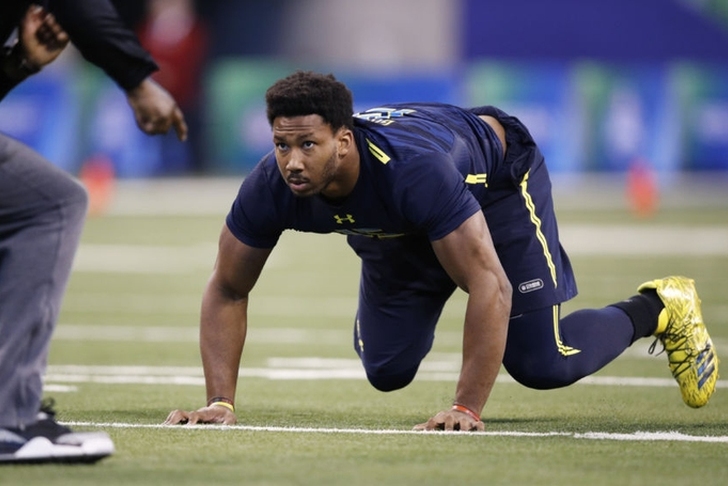 Day 5 of the 2017 NFL Combine is in the books, as the defensive linemen and linebackers have finished their drills and workouts. Some players exceeded expectations and some came up short. With that in mind, it's time to break down some of the winners and losers from today's combine action.

WINNERS:
Haason Reddick, DL, Temple Owls
Reddick has been one of the biggest risers of the pre-draft process, and his workout at the combine helped his stock even more. The highlights was his 40-yard dash, in which he posted the fastest time of any defensive lineman.

Temple's Haason Reddick (@Haason7Reddick) puts up the best 40-yard dash time among all DL with a blazing 4.52! #NFLCombine pic.twitter.com/UHSEpiX3RB

Before the combine, Reddick was projected to be a late first or early second round prospect. However, after his performance, he may have risen to a mid-first round prospect.

Myles Garrett, DE/OLB, Texas A&M Aggies
Garrett is widely considered to be the best overall prospect in this draft class because of his freakish athleticism and size (6-foot-4.5, 272 lbs.), and that athleticism was on full display during the combine.

Myles Garrett (@MyIesGarrett15) wowed everyone at the #NFLCombine by running a 4.64 40-yard dash! pic.twitter.com/CoYe4B4a4z

MYLES GARRETT IS A BEAST!

Myles Garrett at the combine:

Garrett said that it's his goal to the be top pick in the draft, even if it is to the Cleveland Browns. He posted a video last month asking the Dallas Cowboys to trade up to draft him with the No. 1 selection.

“It [would show] I’m the top dog, at least from the beginning,” Garrett said. “But once I’m in the NFL I can’t hang my hat on that. I’ve got to keep on rising.”

He went a long way towards making the goal a reality on Sunday.

Raekwon McMillan, LB, Ohio State Buckeyes
Raekwon McMillan was excellent against the run in coverage, but concerns about his coverage ability have many thinking that he may be simply a two-down linebacker in the NFL. However, after a good 40 time (4.61) and good performance in coverage drills, NFL.com's Bucky Brooks said McMillan definitely helped his draft stock - potentially pushing him into the first round.

Jabrill Peppers, SS, Michigan Wolverines
Michigan's Jabrill Peppers was one of the biggest question marks at the combine due to his lack of position, and while that is still a concern for some teams, Peppers has done enough to put most of those doubts to rest. First, he declared that he is a "pretty damn good safety," and measured extremely well at the combine for a safety. He also helped ease the concerns that he isn't good in coverage with excellent performances in drills.

.@JabrillPeppers shows off his blazing speed with a 4.46 40 time! #NFLCombine pic.twitter.com/VTWwzDxKZ8

Peppers racked up 66 tackles with 13 tackles for loss, three sacks and one interception as a linebacker last season.

LOSERS:
Zach Cunningham, LB, Vanderbilt Commodores
Cunningham gained notoriety at Vandy last season for being one of the best linebackers in the country, but his workout on Sunday made some wonder how his skills will translate to the NFL. He ran a 4.67 in the 40-yard dash, which is average, and didn't look either comfortable for fluid in coverage drills while dropping several passes. His stock definitely took a hit.

Reuben Foster, LB, Alabama Crimson Tide
Yes, Foster's bad day technically came earlier in the weekend when he was sent home after getting into a heated altercation with a hospital worker, but his absence was definitely felt today during linebacker drills. He also said today that he has sent an apology letter to all 32 teams, and while that's a good move, it isn't anything more than damage control.

Takkarist McKinley, DE/OLB, UCLA Bruins
On the field at the combine, McKinley was a beast, running a 4.59 40-yard dash, posting a 33-inch vertical and a 10-foot-2 broad jump. However, his drop comes from an injury off the field, as he will have to undergo shoulder surgery after the combine that will keep him out for at least five months.

"My agent asked if anything was wrong with me, and I said I had a shoulder that was sometimes bothering me," McKinley said Saturday, via Jeff Legwold of ESPN.com. "I had an MRI, and the doctor was pretty much amazed I had played with it. Me, I just told my trainers at UCLA, 'Just tape me up. I'm ready to go.'"