Winners And Losers From Day 4 Of The 2017 NFL Combine 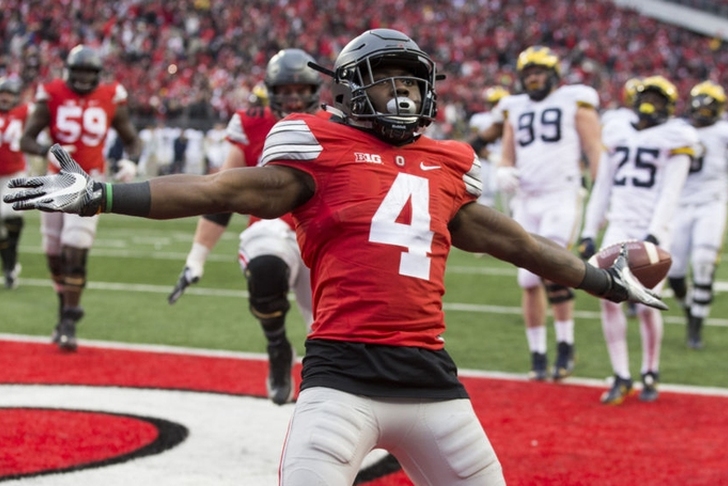 Day 4 of the 2017 NFL Combine is in the books, as the quarterbacks, wide receivers and tight ends have finished their drills and workouts. Some players exceeded expectations and some came up short. With that in mind, it's time to break down some of the winners and losers from today's combine action.

One quick note: I don't have quarterbacks in either section, because I don't put much stock in how they look throwing in shorts making zero reads. And it's not like the 40-yard dash is really going to affect the top guys stocks. Plus, the ones who looked poor (cough Mitch Leidner cough) weren't going early anyway.

With that in mind, here are 5 winners and 5 losers from Day 4 of the NFL Combine.

Ross had cramps at the end of that run and shut his day down after setting the record. It would have been nice to see him do the drills, but it doesn't really matter. When an already potential first round pick runs a freaking 4.22 40, he's a winner. The injuries, lack of size and route running problems remain, but he's a first round lock now.

WR Curtis Samuel, Ohio State
Lost in the hype around Ross is how well Samuel performed. He checked in at 5-foot-11, 196 pounds, good size for a slot wide out (his NFL position). He then went out and posted a blistering 4.31 40-yard dash, the second best time, which was totally overshadowed by Ross. Oh, he was also tied for fifth in bench press reps (18) and in vertical jump (37 inches). This is a prime example of destroying the combine (plus, he looked pretty solid in drills). Samuel will at least a Day 2 pick and should go in the second round. By the way, he's only 20 years old.

WR Chris Godwin, Penn State
Godwin went out with the first group, before the Ross buzz took over, and was damn impressive. At 6-foot-1, 209 pounds, he posted a 4.42 40-yard dash, tied for fifth. He was tied for second with 19 bench press reps and, most impressively, was tied for first in the 20-yard shuttle. The other prospect was Ryan Switzer, who weighs nearly 30 pounds less. He's a Day 2 pick and could sneak into the second round, along with players like Zay Jones (who also looked really good).

TE Evan Engram, Ole Miss
At 234 pounds, Engram isn't really your prototypical tight end. He's much more of a "move" tight end, which is really just a bigger slot WR. But still, Engram posting a 4.43 40-yard dash is absurd. That would have been tied for 5th among wide receivers. Check out the run below.

He was also top 6 among TEs in both broad and vertical jump. Look, Engram might not be a true in-line blocker in the NFL and might honestly be better off being moved to wide receiver (he's built a lot like Devin Funchess). But running that 40 time helps his stock and he should go on Day 2, potentially as early as Round 2.

A Whole Bunch Of Tight Ends
Ok, time to cheat. I capped myself at five "players," but we could have an entire five combine winners from the position alone. So I'm going to merge the last few guys into one. We start with Virginia Tech TE Bucky Hodges, who now has the best broad jump of any TE in combine history at 11-foot-2 inches. He also led all TEs with a 39 inch vertical jump and posted a 4.57 40-yard dash, fifth best. At 6-foot-6, 257-pounds, Hodges is going to be a jump ball nightmare at tight end. He still has some work to do with blocking, route running and some lapses with drops. But I had him as the second best of all the tight ends in this year's class. This is why.

The best tight end in the class, without a doubt, is Alabama TE O.J. Howard. He checked in at 6-foot-5 3/8, 251 pounds and posted a blistering 4.51 40 time, the second best behind Engram. He also tied for third in the bench press and seventh in the broad jump. With that 40 time under his belt, Howard looks like he could push for a Top 15 or even Top 10 selection. After all, his tape and blocking ability is better than the rest of the top-level guys.

Speaking of blocking, the best blocker in the class is Iowa TE George Kittle. But he showed he wasn't just a blocker; he's an athlete. He posted the third best 40-yard dash (4.52) and broad jump (11 inches). That surprised me. He's not just going to be drafted as a No. 2 blocking tight end. Teams will take him as a future No. 1.

Finally, there's Ashland TE Adam Shaheen. Checking in at NFL offensive lineman size of 6-foot-7, 278-pounds with 33.5 inch arms, Shaheen was impressive. He posted a 4.79 40-yard dash, really good speed for his size. He was tied for first with 24 bench press reps and was top 10 among TEs in broad and vertical jump. The level of competition is a worry, but the traits are there.

Your tl;dr - this is an amazing tight end class and the best in recent memory. Hell, it might end up being the best ever.

LB Reuben Foster, Alabama
This technically happened late last night, but we're including it in the Day 4 section. Foster was sent home early from the Combine for arguing with a hospital worker.

Bama's Reuben Foster, a potential top-10 pick, is being sent home from combine for heated argument with a hospital worker, sources tell ESPN

That's not a good thing for Foster. There is a report that the delays at the hospital were causing Alabama players to miss team meetings, which could explain Foster's frustration. But it doesn't excuse his behavior. He'll have to explain his actions to NFL teams and it could hurt his draft stock. Still, I'll be stunned if he's not a Top 15 pick.

TE David Njoku, Miami (FL)
This is what happens when the hype train gets out of control. Njoku has been hyped as a first round pick (and he still is) and someone who was going to destroy the combine. Instead, O.J. Howard and six others out-ran him and Bucky Hodges beat him in all the major combine drills. I had Hodges above Njoku above my big board and I suspected Hodges was just as good an athlete as Njoku. Looks like he might be even better, since Hodges is taller and weighs more.

Malik McDowell going off script,saying coaches eventually conformed to his style bc they couldnt change/improve him, says he cld play safety

The most worrisome potential knock around McDowell, is that despite his immense talent and traits, he might have issues with coaching. Well that's what this quote seems to indicate. This is why a Top 10 player in terms of traits could fall to the middle of the first or late first. Plus, he wasn't super productive at Michigan State.

WR Cooper Kupp, Eastern Washington
Much like Njoku, Kupp's average to below-average day looks a bit worse because of what those around him did. He measured in with short arms, which is a concern. He's a good route runner and has solid size, but he posted just a 4.62 40-yard dash. That's slow, especially for a 204-pound wide out. He was trying to catch John Ross and be the third wide out drafted, but that seems unlikely. Now, with Zay Jones, Curtis Samuel and others (like Chris Godwin), posting impressive combines, Kupp might not be the fourth one taken. I still think he is and like him as a prospect, but the margin has thinned.

WR Kermit Whitfield, Florida State
I thought Whitfield might just be able to break Chris Johnson's 40-yard dash time. Instead, it's John Ross and Whitfield puts up a disappointing (for him) 4.45. With poor size (5-foot-8), short arms (30 inches) and tiny hands (8.5 inches), Whitfield will be a late round pick at best. He also had issues with some drops during the workout. I fear he might be a return man only in the NFL.