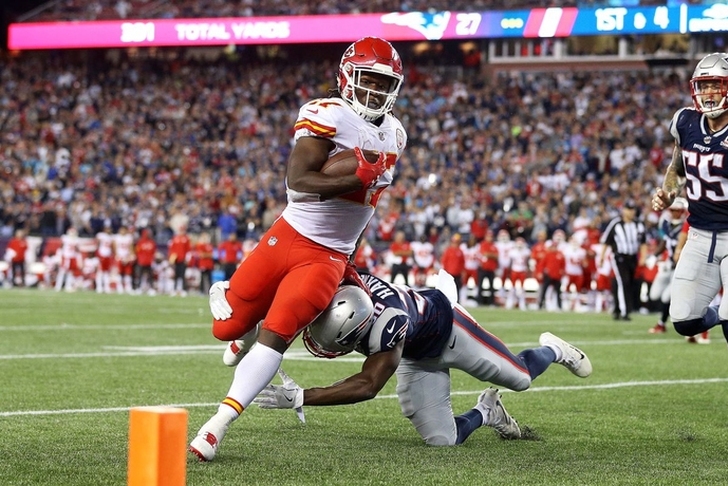 Only one more game to go and then Week 2 is in the books. We have seen plenty of good football and plenty of bad football so far this season. Which is why I am putting together a Who's Hot and Who's Not after two weeks article. Think of this as the Tinder or Bumble article of football. Yes, I do app dating and no I'm not embarrassed to say that I do. There are two kinds of single people, those who use dating apps and those who lie about it, same goes for people peeing in the shower. Getting off topic. Here are the players Who are Hot and Not after two weeks.

Who's Hot
Tom Brady
QB | New England Patriots
Brady looked great in Week 2 against the Saints, he also played really well throwing for 447 yards and three touchdowns. Brady currently leads the NFL in passing yards and even though the New England Patriots have been dealing with a ton of injuries to their receivers, it looks like this Patriots offense will be perfectly fine this season.

Kareem Hunt
RB | Kansas City Chiefs
Kareem Hunt is putting up video game numbers. He has been so great that I separated him from the rookie running backs. He has 30 carries for 229 yards and three touchdowns on the ground plus eight receptions for 126 yards and two touchdowns. Hunt is currently on pace to beat Chris Johnson's scrimmage yard record by 330 yards. That's laughable how good that is. The Kansas City Chiefs look like they found gold with Hunt.

The Rookie Running Backs
As I stated above, Hunt has been great but other rookies have emerged this season. All offseason we talked about how great this rookie running back is but I don't think any of us expected this. Three of the top five rusher leaders in the NFL are rookies. Between Hunt, Leonard Fournette, Dalvin Cook, and Tarik Cohen the rookies have been fantastic. That's not even considering Christian McCaffrey and Joe Mixon who have shown signs of being great.

Who's Not
Andy Dalton
QB | Cincinnati Bengals
If you don't know how Andy Dalton has been, then I'd say google Andy Dalton. Heck, there are even talks about him being benched and the Bengals players want to see Colin Kaepernick in a Bengals uniform. Dalton has zero touchdowns and five turnovers in two home games. The Bengals have yet to score a touchdown and the Bengals fans want answers.

Isaiah Crowell
RB | Cleveland Browns
Crowell has been super disappointing in 2017. He has 17 carries for 33 yards behind a very talented offensive line. He also has only two catches for 33 yards this season. Crowell is facing stacked boxes and even when he does get the running room he isn't taking advantage of the running lanes.  The Browns want to be able to run the ball and take pressure off their rookie quarterback but Crowell hasn't been able to do that yet.

John Brown
WR | Arizona Cardinals
After a good Week 1, John Brown missed Week 2 with a quad injury. Brown can't stay on the field and his already dealing with injuries. I have been backing Brown all season but I just can't-do it anymore. Which hurts me to say but he can't stay healthy and this Cardinals team looks like a total dumpster fire.