Who Will Sign Jason Pierre-Paul? Here Are 3 Teams That Could Add The DE 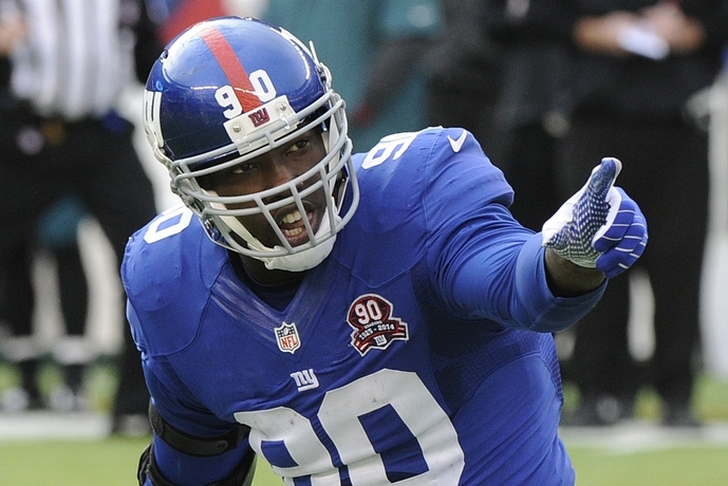 Jason Pierre-Paul has had an eventful past year. The New York Giants DE blew off part of his hand in a fireworks accident and missed most of this season. The Giants aren't a favorite to bring him back, as they'll likely to start over at DE and sign another big-name player or draft one. Plus, there remain concerns about JPP's health.

But Pierre-Paul isn't far removed being a top-notch DE and showed promise in his return late last year. At just 27 years old, Pierre-Paul is still young enough to merit a long-term deal. His exact value is very much up in the air, but he should get a decent-sized contract. But what team will add Pierre-Paul this offseason? He's a 4-3 DE only, which means any 3-4 teams wouldn't be a good fit. With that in mind, here are three teams that could sign Pierre Paul.

Oakland Raiders
The Raiders might not be an ideal fit for Pierre-Paul, in large part because they don't always play a 4-3 defense. The Raiders occasionally use a 3-4 scheme, and the team has Khalil Mack and Mario Edwards already. However, Justin Tuck did elect to retire and Pierre-Paul can come in right away and take over for another former Giant's snaps. The Raiders are loaded with cap space, so money is not a factor. For more Raiders rumors, download the Chat Sports Android and iPhone app.

Dallas Cowboys
The Cowboys need some defensive end help this offseason, and that's only been reinforced by the four-game suspension Randy Gregory received today. The Cowboys have Demarcus Lawrence at one DE spot, but Greg Hardy and Jeremy Mincey are free agents. Signing JPP to replace Hardy makes sense of the Cowboys. He might be cheap enough for Dallas to afford (especially if it's a short-term deal). The downside is that signing JPP could affect the Cowboys' pursuit of a top-flight CB.

Tampa Bay Buccaneers
The Buccaneers play a 4-3 defense and desperately need help at defensive end, which makes JPP a perfect fit. William Gholston showed some promise, but the team needs more help. Jason Pierre-Paul could come in and immediately be the team's top DE. The Bucs are loaded with cap space and could give Pierre-Paul more money to help convince him to head to Tampa Bay. For more Bucs rumors, download the Chat Sports Android and iPhone app.