Who Will Sign Eric Weddle? Here Are 4 Possible Landing Spots For The Safety 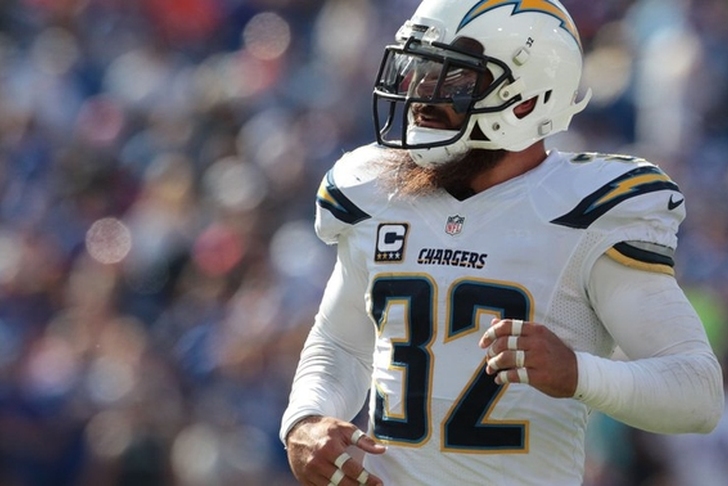 NFL free agency is officially here, with many of the top players getting lucrative contracts. However, not every talented player has signed. One of those players is Safety Eric Weddle.

He's spent his entire career with the San Diego Chargers, but won't play for San Diego next season. Weddle is done with the Chargers, especially after they fined him $10,000 for watching his daughter perform at halftime of a home game. Weddle recently turned 31, meaning he likely won't be that expensive. Several teams will be interested in Weddle, but he's has already said it's not about the money. It's about chasing a Super Bowl. All four of teams listed are the ones Weddle told SI.com's Peter King are a good fit. With that in mind, here are four destinations for Eric Weddle this offseason.

Carolina Panthers
The Panthers have Kurt Coleman at free safety, which is Weddle's natural spot. But Weddle could take over for an aging Roman Harper at strong safety. The Panthers don't have a ton of cap space, but could afford Weddle if he takes a cheap deal. Plus, joining Carolina would give him a great chance at pursuing a Super Bowl.

Dallas Cowboys
The Cowboys are tight on cap space, so they wouldn't be able to pay Weddle very much money. But if he's willing to come cheaply, he'd be an upgrade at safety for Dallas. Byron Jones was the team's best safety last season, but the Cowboys might need him at corner with Brandon Carr's future uncertain and need at the spot. If that's the case, that would leave Barry Church and J.J. Wilcox at safety. Church is serviceable starter, but Wilcox is a backup at best. Getting Weddle would be a big upgrade for the Cowboys in the secondary. To be alerted when Weddle signs, download the Chat Sports Android and iPhone app.

Oakland Raiders
The Raiders have the cap room, despite spending big bucks on Bruce Irvin, Kelechi Osemele and Sean Smith. While the Raiders might not be totally ready for a Super Bowl run yet, they are building in that direction. The team badly needs safety help and Weddle would be a huge boost.  Weddle would be the perfect fit, and the chance to play against the Chargers twice a year could intrigue him.

Pittsburgh Steelers
The Steelers are on tight on cap space. They'd need Weddle to take a contract for less than he's worth, but he'd be a perfect fit in Pittsburgh. Mike Mitchell is best in the box, so Weddle can operate as a true free safety. Will Allen is a free agent and also aging, so Weddle could take his spot in the lineup. The Steelers already signed TE Ladarius Green, but are still interested in Weddle. For more on NFL free agency, download the Chat Sports Android and iPhone app.