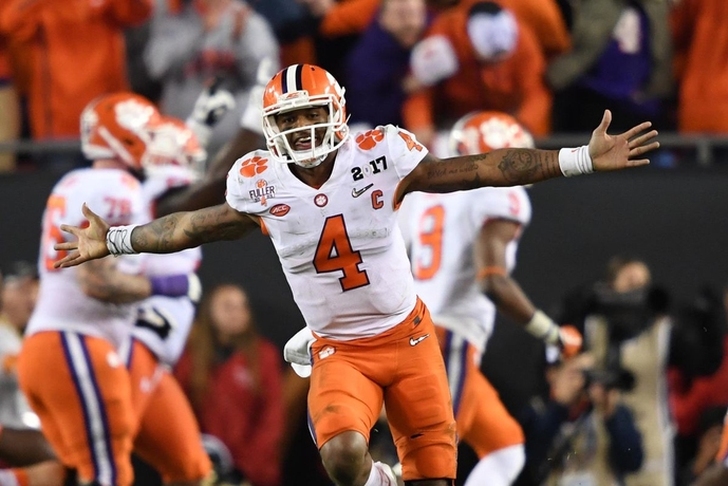 Welcome to the third edition of What's Going Downey, my NFL Draft/NFL focused column for Chat Sports. In this week's column, I've got a a long rant on Deshaun Watson, some updates on NFL Free Agency, the latest on Joe Mixon, Jourdan Lewis and several other draft prospects. I've also got an interview with FanSided's Peter Panacy and, as promised, compare EDGE rusher prospects to meats/fish/etc.

The goal of this is to have a longer piece each week, focused on the NFL Draft. If it does well (read: gets views), it will remain a weekly article. In terms of content, I’ll have some type interview each week with an athlete/media person, questions I'll answer from social media, updates on my Draft Big Board or a new mock draft and a section I’m calling "Downey’s Dozen." That will consist of 12 things from around the NFL/NFL Draft that I want to discuss. I’ll also conclude with something funny/stupid. Probably the latter.

Here’s what we have on tap in this column:
An updated Big Board
Downey’s Dozen (a look at the NFL & NFL Draft)
A Q&A with Peter Panacy of Niner Noise
Q&As from Facebook and Twitter
I Know Takes, I Have The Best Takes

That’s the five section breakdown, and there’s plenty of information in each one. So, my hope is you all enjoy this column and hopefully read it each week. In next week's edition (since this version is written and coming out early in free agency), I'll go much more in-depth with winners, losers and more. We'll get to some free agency stuff, but check out the Chat Sports App for more in-depth stuff. With all that out of the way, let’s get started.

It's been a busy week (when isn't it busy?), with March Madness and NFL Free Agency. But I did find the time to update my the Top 70 of my big board. It's far from finalized, and the players outside the first two rounds (the Top 70 happened to match up with the player's I've given at least a Round 2-3 grade) still need a ton of work. I'll have a finalized big board before the draft, but it's a bit of a mess so I don't want to make it public quite yet. Perhaps I'll have a version of it for next week, but no promises.