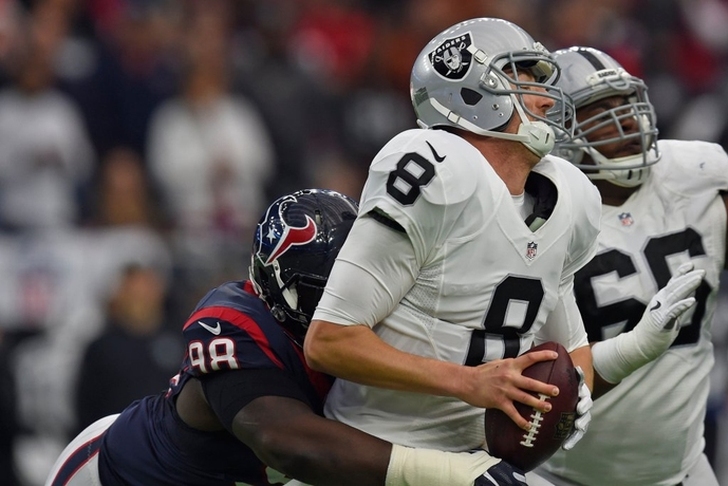 With no Derek Carr, the Oakland Raiders just didn't have enough firepower on offense to hang with the Houston Texans. The Texans cruised to a 27-14 win, a game in which they never trailed. Connor Cook struggled against the stout Texans defense, while Brock Osweiler and the rest of the Texans' offense did enough to pick up the win.

Here are four things we learned from the Texans' win Saturday.

4. The Injuries Were Too Much For Oakland
If the Raiders' were as healthy as they were just a few weeks ago, they might just have won this game. That's when they were one of the best teams in the NFL, but they were down three Pro Bowl selections in QB Derek Carr, LT Donald Penn and (briefly in this game) center Rodney Hudson. WR Michael Crabtree also left in the fourth quarter, although he struggled when playing. That's just two much for a team to overcome and QB Connor Cook wasn't anywhere near good enough (18 of 45 passing for 161 yards, 1 TD and 3 INTs) to pick up a win. Drops really didn't help, but the Raiders didn't convert a third down until the fourth quarter. All of that is not designed to be an excuse for the Raiders, but the injuries they suffered late in the year killed their Super Bowl chances and resulted in a one-and-done playoff berth.

3. Well Hello Texans Pass Rushers
The Texans defense is still pretty darn good, even without J.J. Watt. Former No. 1 overall pick Jadeveon Clowney is a major reason for that. Luckily for Houston, Clowney was mighty impressive against Oakland. He had two deflected passes, an interception and was disruptive throughout. Not to be outdone, Whitney Mercilius has three tackles for loss and two sacks, although he did picked up a roughing the kicker penalty that negated a punt return TD.

2. The Brock Osweiler-DeAndre Hopkins Connection Finally Clicked
Osweiler and Hopkins just have not worked well together this year. Osweiler has thrown too many picks when targeting Hopkins and the star WR hasn't produced the way we've seen him do so in the past. But that wasn't the case, especially in the first half. Hopkins caught five passes for 67 yards and a TD on seven targets in the first half. Hopkins didn't catch a pass again, but it was still a very promising sign. Osweiler played mistake free football, finishing 14 of 25 for 168 yards, 1 passing TD and one rushing TD.

1. Does Anyone Trust Houston Next Round?
Best case scenario for the Texans is they go on the road to face the Chiefs. The worst case is they get the Patriots on the road. Neither of those is very appealing for this team. Sure, they pounded the Raiders, but this is an Oakland team that is not good right now. Without QB Derek Carr, the offense struggled badly. That won't be the case against the Chiefs (who also have a much better defense than Oakland) and especially true against the Patriots. A playoff win is always welcome, but the next round doesn't hold the same promise for Houston.