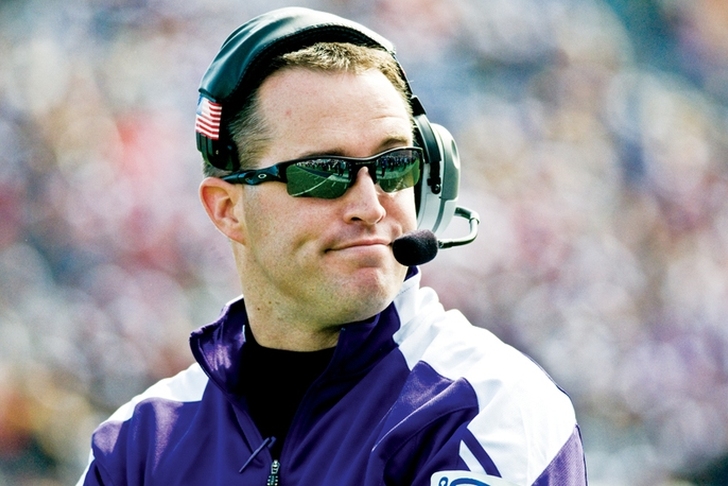 Black Monday is just over a week away, with several NFL head coaching jobs likely to open up during the annual sideline purge ritual. The Miami Dolphins and Tennessee Titans will of course be in the coaching hunt, while the San Francisco 49ers, Detroit Lions, New York Giants, Cleveland Browns, St. Louis Rams and San Diego Chargers, and New Orleans Saints could also put themselves in the mix.

While the majority of potential replacements will come from the NFL, there are two NCAA coaches who could be at the top of the aforementioned teams' wishlists -- UCLA head coach Jim Mora and Northwestern head coach Pat Fitzgerald.

Per Jason La Canfora of CBS Sports, both Mora and Fitzgerald will garner plenty of interest if they decide to dip their toes in the NFL water. Mora already has four uneven years of NFL head coaching experience (Atlanta [2004-06], Seattle [2009]), and he likely won't make the jump back to the pros without some major convincing. His 37-16 record at UCLA intrigues several teams, though, with the 49ers and Chargers rumored to be likely suitors.

Mora spent 1997-2003 on the 49ers' coaching staff, and 1999-2003 as their defensive coordinator. He could also make a run at the New Orleans job, considering his work as an assistant for his father during Mora Sr.'s coaching stint in the Big Easy.

As for Fitzgerald, his stock is booming after leading Northwestern to just the fourth double-digit win season in program history. He responsible for two of those banner seasons, with the other coming in 2012 -- a season which the Wildcats finished off with their first bowl victory in 64 years. What makes that even more impressive is that the Wildcats are low on the Big Ten totem pole when it comes to recruiting clout.

Search firms are already gauging the 41 year old's interest in an NFL leap, and we wouldn't be surprised if the Cleveland Browns make a play considering relative proximity and Fitzgerald's success with dual-threat QB Clayton Thorson -- something which could prove invaluable if the team stays in on Johnny Manziel.

In fact, any of the nine aforementioned NFL teams could be in on either Mora or Fitzgerald, considering that both represent the most logical NCAA-to-NFL head coaching options out there are the present moment.