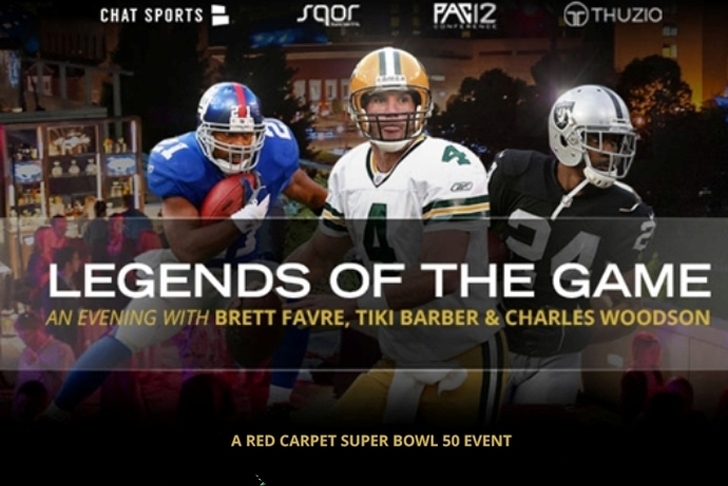 The event was held in downtown San Francisco ahead of Super Bowl 50. Chat Sports hosted the event with Sqor Sports, Thuzio Club, and the Pac-12 Network.

Woodson won the Super Bowl as a member of the Packers in 2010, which, naturally, was his favorite memory of the big game. He also said that he expects the Panthers to beat the Broncos.

Charles Woodson in the house! He says he's rolling with the Panthers on Sunday. #LegendsOfTheGame pic.twitter.com/kVeeG9EWqo

Barber agreed with him. "They have done so much right over the course of the year," he said. "Greatness is measured by consistency, and they've had nothing but consistency this year."

Barber played in the Super Bowl with the Giants in 2000, but lost the game to the Baltimore Ravens, so he went back to his childhood for his favorite Super Bowl memory. He says he grew up as a fan of the Washington Redskins growing up in Virginia, but his favorite memory was when former Raiders running back Marcus Allen reeled off a jaw-dropping 74-yard touchdown run against the Redskins.

Barber said that run "broke his heart," but it made him a big fan of Allen.

Several other big-name guests stopped by the red carpet event along with Favre, Barber, and Woodson, including current Packers running back Eddie Lacy and Jen Welter, who became the first female coach in the NFL this year with the Arizona Cardinals.

The Carolina Panthers cheerleaders also made an appearance at the event. Naturally, the Panthers were their pick to win the Super Bowl.

Cheerleaders from the @Panthers just stopped by to have their photo taken! #LegendsoftheGame #SB50 pic.twitter.com/PO6US4uGWv

In case there was any doubt, the #Panthers cheerleaders stole the show #LegendsOfTheGame @JamesTYoder @bscott0527 pic.twitter.com/ghJHt4fhBh

Super Bowl 50 between the Carolina Panthers and Denver Broncos is set to kick off at 6:30 pm ET tomorrow at Levi's Stadium in Santa Clara, CA. The game is being televised by CBS.