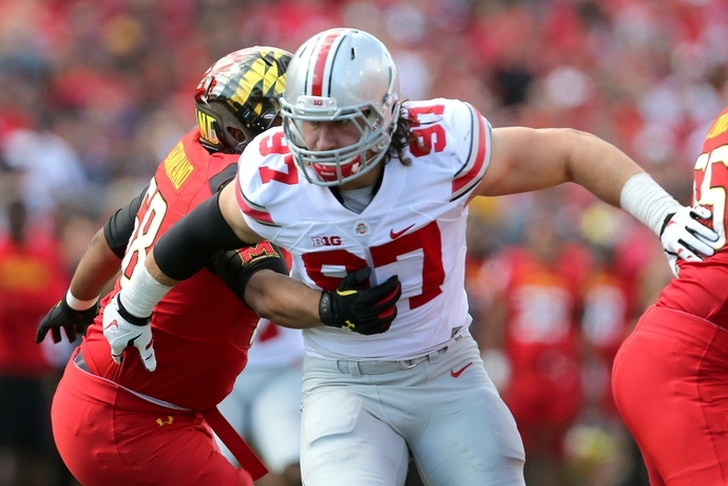 ESPN NFL Draft Expert Mel Kiper has updated his big board for the 2016 NFL Draft. Here are his top 10 college football prospects, including a new No. 1 player.

"It says plenty when people ask whether he's really been that productive and he has 16 tackles for loss. He's gotten a ton of blocking attention. He's an explosive pass-rusher who has power and awareness and is consistently disruptive against the run. Bosa has size and versatility that will fit any scheme, as well as the ability to go around blockers or right through them. He's been double- and triple-teamed. When he's one-on-one he wins, period."

2) Jaylon Smith, OLB, Notre Dame Fighting Irish
Kiper: "Every week he jumps off the screen. It's really hard to pick out serious flaws, aside from a missed tackle here and there and occasional overpursuit. Smith is making a case to be a versatile linebacker you can select safe in knowing he can be plugged in right away. He can be moved around, has good length and can flat-out fly for a linebacker, with sub-4.5 speed."

3) Jalen Ramsey, DB, Florida State Seminoles
Kiper: "Status quo all season after the move back to cornerback. A does-it-all talent who had already started 28 college games heading into this season, I would have rated him the top safety taken in the 2015 draft. But this season he's at cornerback. He has the length, range and exceptional instincts to make plays all over the field; indeed, he has enjoyed an expected smooth transition to corner. He is a truly gifted athlete."

4) DeForest Buckner, DE, Oregon Ducks
Kiper: "Love his motor and his production while dealing with a lot of blocking attention. Similar to Bosa in that regard. At 6-foot-7 and 300 pounds, he has an impressive frame and with another year of polish could be a fit in almost any kind of system."

5) Robert Nkemdiche, DT, Ole Miss Rebels
Kiper: "When he's 100 percent, he can be dominant; you just wonder how consistently he can play when completely healthy. He explodes off the snap like a guy 40 or 50 pounds lighter. And Nkemdiche isn't just quick; he also has strength at the point and doesn't get eaten up by double-teams. If he stays healthy, he'll end up in the top five.

6) Laremy Tunsil, OT, Ole Miss Rebels
Kiper: "The entire skill set is there. Flexible, quick, powerful and long, I still think he's the best pass-blocker in the draft at this point in my evals, a guy who wouldn't look out of place if he had to play on Sundays this season. Nimble but strong, he has all the traits you look for at that spot."

7) Paxton Lynch, QB, Memphis Tigers
Kiper:  "It's pretty neck-and-neck with him and Jared Goff in a merely OK class of quarterbacks. Lynch has good size with room to fill out. He not only has a strong arm but the ability to get the ball out fast. He has the height to see the whole field quickly without creating space, and he throws well on the move when he needs that space. It sounds trite, but the talent for the position is so clear, and the decision-making has been very good."

8) Ronnie Stanley, OT, Notre Dame Fighting Irish
Kiper: "He marries prototypical length with impressive movement skills. He moves well laterally and can flash great hand use. I thought consistency was the problem last year, but he put things together in 2015. He could push to become the top tackle available."

9) Vernon Hargreaves, CB, Florida Gators
Kiper: "A deft cover man, Hargreaves lacks size, but he makes up for it with instincts and effortless fluidity in moving with receivers. Of course, he's not small, at 5-11 and about 195 pounds; he just lacks a margin for error compared to some. A starter since he arrived, he's the best pure cover corner in the draft class at this point."

10) Jared Goff, QB, Cal Golden Bears
Kiper:  "He hit a rough patch this season, but Goff always bounces back. The arm can be special, as Goff can not only drill the ball down the field and into tight windows with ease but also has a changeup and proper trajectory. He has good movement skills and anticipation and he sees the whole field. He can also move defenders with his eyes pretty well and will continue to get better.."