Is Tony Romo Heading For the Exit? 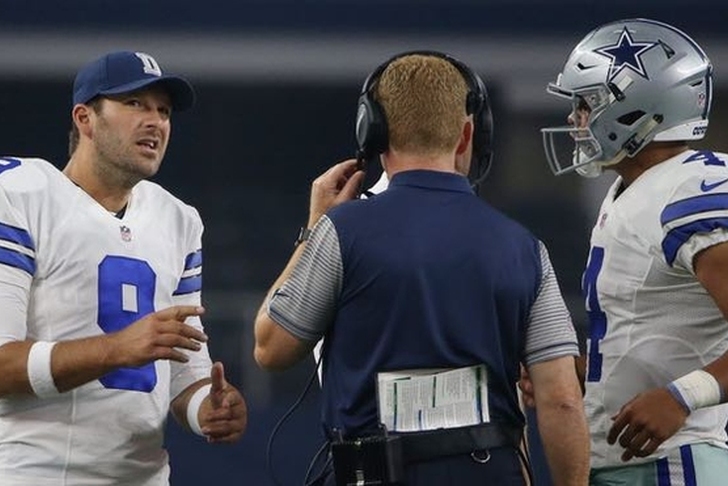 As the NFL season goes on for the Dallas Cowboys, a lot of rumors are circling when it comes to certain players’ futures. It’s normal for players to come and go from team to team during the season, but when it comes to players such as Tony Romo, it’s sometimes a surprise for all football fans. Rumors regarding the quarterback’s future have been doing the rounds for a while now, and it could be just a matter of time before Romo heads for the doors if the rumors are true. Will he stay or will he go? What does the Dallas Cowboys owner think of the rumors?

What Does Jerry Jones Think?
Jerry Jones is the current owner and manager of the Dallas Cowboys, so he is the main man to talk to when it comes to player movement. He wasn’t happy when asked about the situation regarding Romo’s future at the club, and has repeatedly told reporters not to believe everything they say or hear, because there are plenty of things going on behind closed doors that nobody knows about. It seems a bit strange that even the Cowboys owner isn’t interested in talking about the future of Romo, but he seems to be certain that no decision has been made, not even by the player himself.

Jerry Jones Still Rates Romo
When asked if the player will be leaving the Dallas Cowboys, he also said that wherever the player spends his playing days, he is a player that will find himself playing in a Super Bowl one day. Jerry thinks Romo has the ability to play at the biggest sporting event in history because of his skills and attitude, but whether that is with the Dallas Cowboys remains to be seen.

Reports Suggest it is a Trade Waiting to Happen
Recent reports suggest that there has, in fact, been a decision on Romo’s future and that it is a trade just waiting to happen. It’s not quite clear yet if it’s the Dallas Cowboys decision to trade him or Romo’s himself, but if he does leave this season, there are plenty of clubs that will be happy to take advantage of his services.

Where Would Romo Go?
Romo has the quality to succeed anywhere he plays, and as Jerry Jones thinks Tony will play in a Super Bowl one day, this suggests he is going to be one of the players to watch over the next couple of years. Numerous teams are interested in a trade for Romo’s quarterback services, and it could only be a matter of time before we see him on the field for a new team.

What Do the Bookmakers Think?
Romo has the quality to come in and play for any team in the NFL, which is why rumors surrounding his future are coming to light on a daily basis. The bookmakers believe he is a player that many clubs want, which is why he is favored to leave the Dallas Cowboys this year. TheBookiesOffers would be a good place to go to take advantage of promotions, and if you think Romo will leave this year, why not have a bet on his next destination?

If Romo and the Dallas Cowboys do decide his future is with another club, then he will be sorely missed by fans and teammates, but with a player of Romo’s quality, there are plenty of clubs that will take advantage of his quarterback experience. Will Tony leave the Dallas Cowboys or will he still be there next season? We will all find out soon enough.