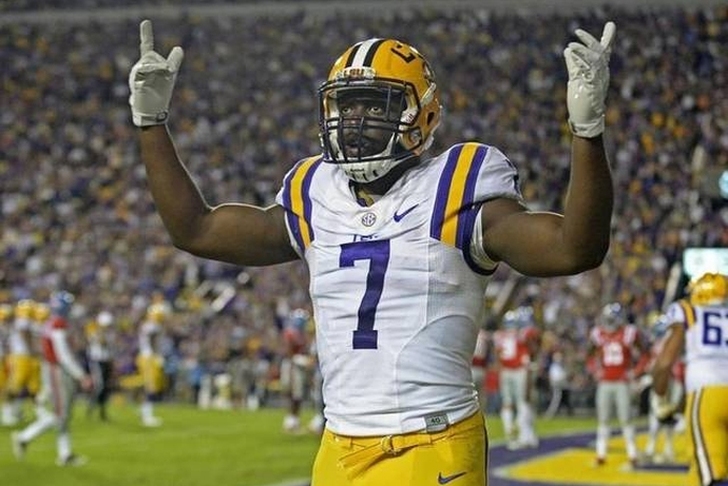 The 2017 NFL draft class is absolutely loaded at the running back position. With Todd Gurley and Ezekiel Elliott turning into stars each of the last two years as rookies, this draft class has the potential for several backs to turn into stars, with as many as three or four running backs being taken in the first round. Here are the top seven running draft prospects in the 2017 draft, and which round they are projected to be drafted in:

1) Leonard Fournette, LSU - Early 1st Round
There is no doubting Fournette as the top running back in this class. He's the best RB prospect since Adrian Peterson, displaying an extremely rare combination of size and speed. He is expected to go at some point in the top eight picks.

2) Dalvin Cook, Florida State - Mid 1st Round
As good as Fournette is, Cook has a real chance to be just as big of a star. Along with gamebreaking speed and excellent vision, Cook is an excellent receiver out of the backfield. There's a chance he can go in the top 10, but there's no doubting him as a top 20 prospect.

3) Christian McCaffrey, Stanford - Late 1st Round, Early 2nd Round
McCaffrey will be an interesting case on draft night. He's the best receiving running back in this class and also displays great vision, but there are questions about how his speed will translate to the NFL. The Panthers are rumored to have interest in him at No. 8 overall, yet I think that's a big far fetched. He'll more than likely go at the end of the first round (maybe the Patriots?).

4) D'Onta Foreman, Texas - 2nd Round
The 6-foot-1, 250-pounder is the premier power back in this class. He has risen up draft boards after a spectacular 2016 campaign in which he recorded 6.3 yards per carry for 2,028 yards with 15 touchdowns. Foreman isn't much of a receiver, but he has real lead-back potential in the second round.

5) Alvin Kamara, Tennessee - Late 2nd Round, Early 3rd Round
Kamara has been a late riser due to his dynamic speed and receiving skills. He would occasionally line up as a wide receiver for the Vols last year, and his potential as a versatile asset is why teams are high on him.

6) Wayne Gallman, Clemson - 3rd Round
Gallman was one of the most underrated players in the entire country at Clemson, where he was often limited due to injury or lack of chances given to him due to playcalling, but still averaged 5.1 yards per carry for 1,087 yards with 16 touchdowns. He's a quick slasher with excellent one-cut ability.

7) Joe Mixon, Oklahoma - 3rd Round
If it wasn't for the 2014 incident in which he punched a woman, Mixon would be in the conversation with Fournette and Cook to be the top running back taken. He has tremendous speed and power, making him a threat to score every time he touches the ball. He's also a very good receiver, recording 32 receptions for 449 yards with five touchdowns this past season.