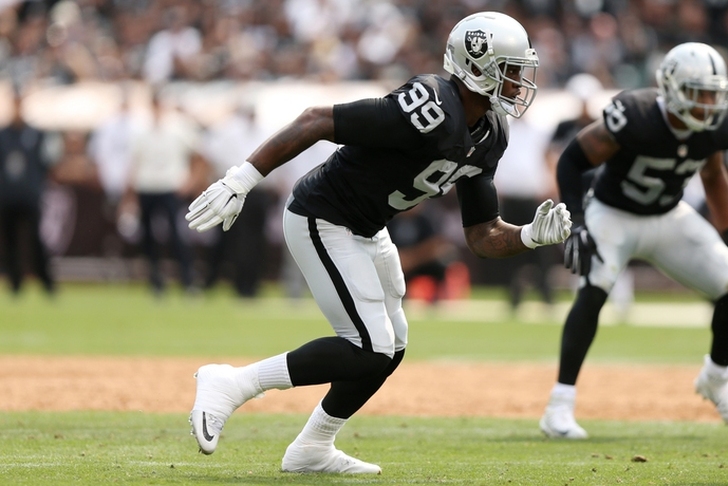 With the NFL season officially over, free agency is now on the minds every NFL team. There are several big-name free agents scheduled to hit the market this offseason and they'll be the top targets for many teams.

One of those players could be outside linebacker Aldon Smith. Smith had spent his entire career with the San Francisco 49ers, but the team cut him after another run-in with the law. The Oakland Raiders signed Smith during the season, and he played well. But the NFL suspended him for an entire year for his preseason incident that led the 49ers to cut him. Smith's contract didn't roll over, meaning he's a free agent that won't be able to play until November next season. Despite that, several teams will be interested in the talented Smith, who is just 26 years old. With that in mind, here are three possible destinations for Aldon Smith this offseason.

Buffalo Bills
The Bills are going to cut Mario Williams, which means they need another pass rusher. Smith will be far cheaper, and could thrive in Rex Ryan's system. The addition on Smith could help the Bills move to Ryan's preferred 3-4 scheme as well. The biggest issue for Buffalo is that the team has limited cap space, and could elect to resign its own players, rather than pursuing other free agents. For more on Buffalo, download the Chat Sports Android and iPhone app.

Seattle Seahawks
The Seahawks are likely to lose pass rusher Bruce Irvin, as he'll command more money than the team can afford. That could make them players for Smith, who will be much cheaper. Smith's off-the-field issues won't be a major problem in Seattle, where the team trusts its ability to handle those types of players. Smith could take on Irvin's role, playing mostly in passing situations.

Oakland Raiders
In the end, expect Smith to remain with Oakland. He said he wanted to stay with Oakland after his suspension was first announced and there's likely a feeling of loyalty for the team that was willing to take the risk on Smith in the first place. The Raiders could sign Smith to a similar deal to the one Greg Hardy signed with the Dallas Cowboys last year. There's still risk with Smith, but plenty of reward as well. For more Raiders news and rumors, download the Chat Sports Android and iPhone app.