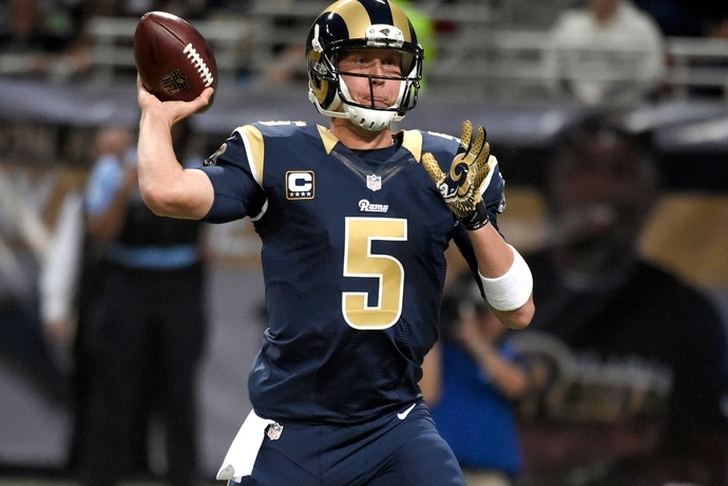 After a trying and failing to find a trade partner, the Los Angeles Rams released QB Nick Foles at his request Wednesday. With Ryan Fitzpatrick signing not long after Foles was released, Foles is now the top QB on the market and should find a new team in the near future. Foles' contract (he was set to count $8.5 million against the cap) was surely a key factor in a trade never materializing, but that's no longer an issue now that he's a free agent.

Foles isn't as coveted as he was after his incredible 2013 season, when he threw 27 TDs and just two picks. The former third round pick by the Eagles in 2012 won't be a starter this year (barring injury), but he should be able to latch on as a backup. Several teams are in need of backup QB help and Foles can provide that. If you're looking for a dark horse, don't forget about the Kansas City Chiefs. They don't have a major need at QB, but head coach Andy Reid did draft Foles in Philadelphia. With that in mind, here are five teams that could try to sign Nick Foles.

5. Pittsburgh Steelers
Ben Roethlisberger is secretly injury prone, battling various injuries, especially in recent years. He's as tough as they come, but has missed at least one game in nine of his 12 seasons in the NFL. It's not a knock on Big Ben, but the Steelers would be smart to have a quality backup. Bruce Gradkowski is back as the top option behind Roethlisberger, but he hasn't thrown a pass since 2012. Behind him is Landry Jones, who is not a quality option in anyway. At the very least, the Steelers should explore replacing Jones with Foles.

4. Indianapolis Colts
The Colts lost Matt Hasselbeck to retirement this year and they replace him with Scott Tolzien, who has thrown a whopping 91 passes with one TD and five picks since entering the league in 2011. There's also the complete unproven Stephen Morris as the No. 3 option. Given the beating Andrew Luck took last year, getting a better option at backup is a smart option.

3. Detroit Lions
The Lions have Matthew Stafford and although he'll occasionally pop up in unsubstantiated trade rumors, he's not going anywhere. But like the previous two teams, the Lions are thin on depth. Backup Dan Orlovsky was re-signed, but he's on the veteran minimum and the Lions can cut him if needed. The Lions did spend a sixth round pick on Jake Rudock, but he's not anywhere near ready to see the field. Foles makes perfect sense as a fit for the Lions.

2. Seattle Seahawks
There might not be a worse backup QB situation in the NFL than the one in Seattle. Russell Wilson is great, but behind him is 2016 undrafted free agents Trevone Boykin and 2015 UDFA Jake Heaps. That's it. Tarvaris Jackson was a re-signing option, but that seems highly unlikely after he was charged with threatening to kill his wife. Boykin plays a bit like Wilson, but going into the season with him as the top backup is a terrible idea. If Wilson gets hurt (which is at least possibility given his play style and the Seahawks terrible offensive line), the Seahawks are in serious trouble.

1. Dallas Cowboys
Remember, the Cowboys were one of the three teams that reportedly had some interest in trading for Foles (although that obviously never happened). The Cowboys are set to have the injury-prone Tony Romo as the starter, with Kellen Moore and Dak Prescott as the backups. Moore didn't show a whole lot in his brief stint as a starter last year, and Foles would undoubtedly be an upgrade. Prescott is not ready to contribute as a backup. Foles fills a big need and the Cowboys might be the most logical landing spot for him.