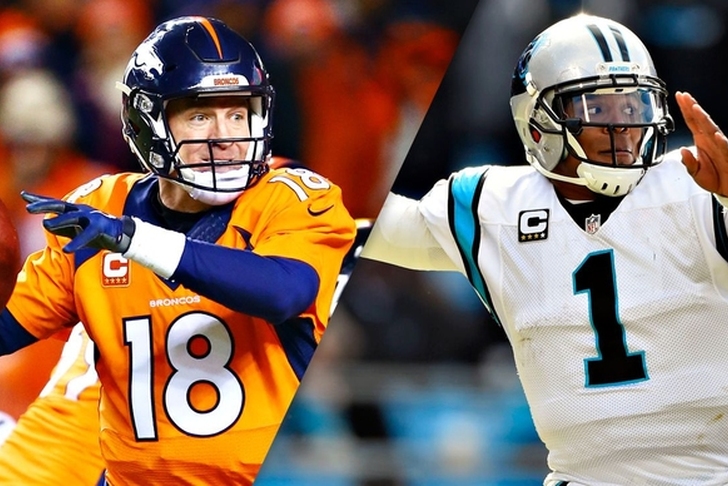 The Carolina Panthers enter Sunday's Super Bowl 50 matchup in search of the first title in franchise history. In order to etch their name in the NFL history books, Cam Newton and the crew will need to spoil what'll likely be Peyton Manning's final game as an active NFL player. Manning's Broncos are viewed by many as heavy underdogs to a Panthers team that's clicking on all cylinders, but Manning remains a Hall of Fame talent and he has the NFL's #1-ranked defense spelling him on the other side of the ball.

Who'll walk away from tonight's big game with a Lombardi Trophy and a storybook ending fit to tell kids and grandkids alike? Here's our Super Bowl Preview & Prediction.

What They're Saying About The Carolina Panthers:
Franchise Tag Is Likely For Josh Norman If Talks Stall
Panthers Dabbed On 'Em In Their Super Bowl 50
Cam Newton Officially Takes Reins As NFL's Transcendent Star

What They're Saying About The Denver Broncos:
Source: Broncos To Franchise Tag Von Miller If Deal Not Reached
Pat Bowlen's Fingerprints All Over Broncos' 8th Super Bowl Trip
How Gary Kubiak Has Come Through For The Broncos

Panthers Offense vs. Broncos Defense:
The Panthers' offense has leaned heavily on QB Cam Newton all season long, and for good reason. He's the likely MVP choice, in part because he's led the Panthers to the Super Bowl with Ted Ginn as a top wide receiver. Carolina has the top ranked scoring offense, but Denver has the top ranked defense.

The Broncos have allowed just 3.3 yards per rush this season and racked up 55 sacks. Both led the NFL. The Panthers interior offensive line has played well this season, but the tackles aren't as solid. Von Miller could be in for a big day, if he can find a way to hold onto the elusive Newton. Download the Chat Sports Android and iPhone app for more on Super Bowl 50.

Broncos Offense vs. Panthers Defense:
The Panthers' defense is nearly as good as Denver's this year. Carolina forced a league-best 39 turnovers this season, and added nine more (thanks, Arizona) in the playoffs. However, key defensive contributors Thomas Davis and Roman Harper were injured against Arizona. While they'll do everything they can to play, their status is unknown.

But LB Luke Kuechly and CB Josh Norman could be in for big games against Peyton Manning. They're two of the better pass defenders in the NFL. The Broncos' offense has been better this postseason with Manning under center, but they haven't run the ball consistently. The Broncos' success on offense is going to be determined by which Manning shows up. For more on the Panthers' defense, download the Chat Sports Android and iPhone app.

X-Factor: Peyton Manning
Manning isn't the player he was in his prime. But Denver is also hoping he isn't the QB he was earlier this season. In the regular season, Manning completed just 59.8 percent of his passes for 2,249 yards, 9 TDs and 17 picks. He had one of the worst seasons of his career, but played better in the postseason.

He's completed 38 of 69 passes for 396 yards and two TDs. Those aren't eye-popping stats, but Manning has managed to avoid the turnovers that have plagued him season. He's leaned on the Denver defense and taken on a game-manager role in the playoffs. That's worked so far, but Manning will need to make a few game-changing plays to beat the Panthers. Looking for more on Manning? The Chat Sports Android and iPhone app has what you need.

The Panthers are built too well to shrink on the big stage. Cam Newton is playing at a transcendent level that we've never seen since Michael Vick in his prime, and we're not even sure Vick compares. The Broncos defense will keep things close until the fourth, but Peyton doesn't have enough left in his arm to sling Denver's way back with the game on the line. Bet the Panthers with the spread and stay away from the over/under.