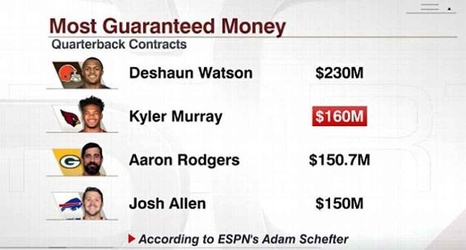 TEMPE, Ariz. -- Kyler Murray finally got the contract he wanted on Thursday, and the Arizona Cardinals finally got the quarterback stability they've been seeking for decades.

The Cardinals didn't have a choice.

Murray's five-year extension, worth $230.5 million with $160 million guaranteed, will keep him under contract through the 2028 season. If he plays the length of the deal, he'll become the second-longest-tenured quarterback in franchise history behind Jim Hart, who played 18 seasons for the St. Louis Cardinals from 1966 to 1983.

That's one of the main reasons Arizona had to give Murray a deal.