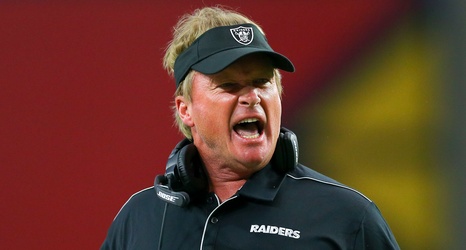 The Raiders arrived in downtown Philadelphia on a brisk day in December 2017. It was exactly one year after their emerging quarterback, Derek Carr, had broken his right fibula, effectively shelving their Super Bowl aspirations. And now, for the second straight year, the direction of the franchise would change dramatically on Christmas Eve.

That morning the NFL Network reported that Jon Gruden, in his ninth year as a color analyst for Monday Night Football, had reached out to former assistants, gearing up for a possible return to coaching. The league’s rumor mill had Gruden going to Tampa Bay, where he won a Super Bowl in the 2002 season.