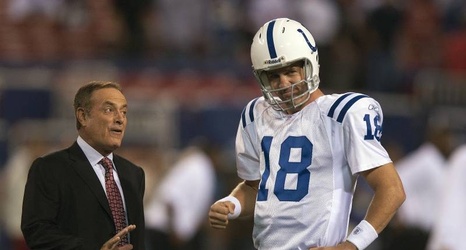 NBC has reportedly turned down ESPN's attempt to acquire veteran NFL play-by-play announcer Al Michaels, but ESPN remains in pursuit of Peyton Manning to serve as the color analyst for Monday Night Football, according to Andrew Marchand of the New York Post.

Michaels has two years remaining on his contract, and NBC spokesman Greg Hughes said the following regarding his status: "We look forward to Al completing his contract and calling Sunday Night Football games on NBC."

While ESPN had reportedly hoped to convince NBC to trade it Michaels in an effort to pair him with Manning, ESPN still wants Manning regardless of Michaels' status.