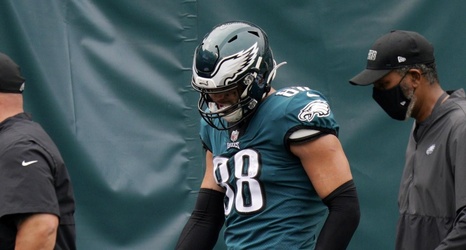 Philadelphia Eagles tight end Dallas Goedert has been diagnosed with a "very small fracture" in his ankle, according to Tom Pelissero of NFL Network.

Per Pelissero, the injury that will not require surgery, though Goedert is expected to miss "at least a couple weeks."

Goedert suffered the injury during a Week 3 tie against the Cincinnati Bengals.

Drafted in the second round in 2018 out of South Dakota State, the 25-year-old managed to collect 91 catches for 941 yards and nine touchdowns through two seasons in the league, even though he competed with Pro Bowler Zach Ertz for touches from quarterback Carson Wentz.