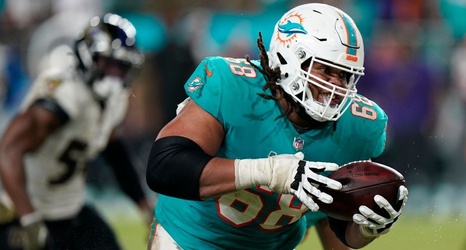 Unfortunately, that is correct. Miami Dolphins offensive lineman Robert Hunt was called for illegal touching during Miami's 22-10 win over the Baltimore Ravens. But had he been an eligible receiver, it would have been quite possibly one of the best touchdowns ever scored.

The now-famous play came early in the fourth quarter when Hunt caught a screen pass from Dolphins quarterback Tua Tagovailoa. Hunt did a full-body flip over a Ravens defender and managed to stretch the ball across the goal line before falling on his head.